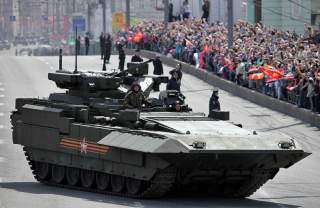 Russia’s new T-14 Armata main battle tank has received a lot of attention from analysts attempting to judge whether Russia finally has a tank equal to the top-of-the-line vehicles fielded by NATO.

But the T-15 Armata, a troop-carrying variant using the same hull as the T-14, has been largely overlooked, even though the T-15 is also a radical departure from its predecessors—and arguably one better-adapted to survive the battlefield realities of the Middle East and Eastern Europe than its closest U.S. counterparts.

The T-15 straddles two categories of vehicles: the infantry fighting vehicle (IFV), a staple of modern mechanized armies, and the heavy armored personnel carrier (APC), a much rarer type that has only recently gained prominence.

The infantry fighting vehicle was conceived in the Cold War 1960s in expectation of a clash between tank-equipped armies of the Warsaw Pact and NATO. Its underlying premises included:

A: Tanks would be the dominant weapon system in a European battlefield, so the ability to operate with—and against—tanks was critical.

B: Tanks divisions would advance rapidly and penetrate deep behind enemy lines. Therefore, infantry needed fighting vehicles to keep up with the tanks and deal with obstacles that called for infantry support.

C: To sustain the pace of advance, these infantry fighting vehicles needed the armor and weaponry to brush off lightly-armed ambush forces and harassing fire from machine guns and light artillery. They also required protection against nuclear, biological and chemical (NBC) weapons that were expected to see use in such a conflict. However, protection against the numerous anti-tank weapons that would have seen use on a Cold War battlefield was seen as impractical and uneconomical.

The Soviet Union came out with the BMP-1 in the 1960s, a fast-moving, lightly-armored vehicle weighing only fourteen tons that carried eight infantrymen and mounted a turret with an anti-tank missile launcher and recoilless gun. The succeeding BMP-2 traded out the recoilless gun (proven ineffective) for a thirty-millimeter auto cannon for dealing with infantry and other light vehicles. NATO soon had its own equivalents; the U.S. M2 Bradley, for example, has a similar armament but weighs over twice as much because of its heavier armor.

These vehicles proved popular because of the heavy firepower they brought to the table—even though they were also vulnerable to portable rocket-propelled grenades and longer-ranged anti-tank guided missiles, as well as the auto-cannons of other infantry fighting vehicles.

As the Cold War drew to a close, instead of fighting fast-paced battles of maneuver, many modern armies instead became involved in grueling urban combat in places like Beirut, Sarajevo, Grozny, Fallujah, the Gaza Strip, and now Aleppo. Armored vehicles are easily ambushed in urban environments and need to be closely supported by infantry to avoid unacceptable losses.

Furthermore, modern anti-tank weapons can easily penetrate most IFVs. While that might have seemed acceptable in a Cold War superpower battle to the death, modern defense ministries can no longer shrug off losing an entire squad of soldiers in a lightly armored personnel carrier to an insurgent RPG.

It was precisely such an incident that led the Israeli Army to begin converting tanks into “heavy APCs”, troop carriers intended to survive heavy weapons fire. Prior to that, there had been few attempts to create armored personnel carriers (APCs) from tank hulls, the most notable exception being the various Kangaroo APCs used by the British and Canadian armies in World War II.

The early Israeli conversions used the hulls of older T-55 and Centurion tanks, resulting in the Achzarit and Nagmashot vehicle families respectively. However, the most important type is the Namer APC , based on the modern, very heavily armored Merkava IV main battle tank. Namer APCs saw combat in 2014 and survived hits not only from rocket-propelled grenades, but deadly Kornet anti-tank missiles. However, the Namer does not carry heavy armament of its own.

The T-15 is an armored troop carrier based on the T-14 tank chassis, with all the beefed up armor-protection that implies. At 48 tons, it weighs slightly more than the T-90 tank currently in frontline service in the Russian army. Nonetheless, it can attain speeds of forty-three miles per hour, a bit faster than the thirty-ton Bradley fighting vehicle.

In the place of the T-14’s tank turret, the T-15 mounts a smaller remote-controlled Epoch turret identical to the ones mounted on the Boomerang wheeled-APC and the Kurganets infantry fighting vehicles, a neat trick in terms of parts commonality. These latter two vehicles, incidentally, will replace the bulk of the Moscow’s BTR and BMP vehicles, while the T-15 will likely operate in more select formations.

The Epoch turret is equipped with a 2A42 30 millimeter automatic cannon, as well as a PKT machinegun. Four AT-14 Kornet-EM fire-and-forget anti-tank missiles are mounted on side racks. The Kornet is one of the deadliest anti-tank missiles in active use, and has knocked out M1 Abrams and Merkava tanks in combat. There is also talk of mounting a different turret equipped with AT-9 anti-tank missiles and a 57 millimeter autocannon, which would improve the T-15’s ability to take out opposing infantry fighting vehicles. (The 2A42 has difficulty penetrating the frontal armor of a Bradley).

Unlike the T-14, the T-15’s engine is located in the front of the hull to accommodate a passenger compartment in the rear. This has the added benefit of allowing the engine to shield the passengers from hits to the front. The passenger capacity of the T-15 remains unclear, some sources estimating it can carry seven troops and other nine. The nine-man figure would certainly be preferable: small squads, such as the six-men squads carried by U.S. Bradley fighting vehicles, can have difficulty securing a building or establishing a robust defensive perimeter by themselves.

The T-15 retains the same multi-layered defensive systems as the T-14, though in a different configuration. You can read a more detailed analysis of how those systems would defend against an American TOW missile here, but here’s a recap:

To begin with, the T-15 benefits from the Afganit Active Protection System (APS), which uses millimeter-wave radars to detect incoming missiles and shells. First, it can deploy “soft-kill” smoke grenades from four launchers in order to disrupt visual and infrared guidance systems. It also tries to shoot the hostile missile down with projectiles launched from one of five launch tubes on top of the T-15’s hull. (The T-14 tank, on the other hand, mounts ten Afganit tubes on its turret, which also automatically turns to face the threat).

Israeli Trophy Active Protection Systems, currently fitted to Namer APCs and Merkava tanks, have an excellent record defending against anti-tank missiles, and so the Afganit could also prove a potent defense.

Projectiles that evade the APS system will then have to contend with the Armata’s Malakhit dual-layered reactive armor, bricks of explosives that blast outward just before a shell or missile hits the vehicle hull. This is intended to trigger the warhead of the shell prematurely.

Shells or missiles that make it through these defenses must finally pierce the T-15’s considerable hull armor, a mixture of steel and composite armor. On the T-14, this is supposedly rated at being equivalent to 1,200 to 1,400 millimeters of rolled hardened armor versus the HEAT warheads used in most missiles.

Other reported defensive features include a jammer for foiling radio-detonated anti-tank mines, a mine-resistant belly armor (presumably V-shaped), and infrared signature minimizing paint (probably only of minimal benefit), a built-in entrenching blade, and NBC protection. The T-15 also is believed to retain the numerous cameras and sensors that equip the T-14.

The Fighting Vehicle for the Future?

It remains to be seen how many T-15s will be produced—only ten prototypes exist at present—and how they will be integrated into the Russian military. For example, would they serve as standard equipment for the mechanized battalions of tank regiments or operate in independent units?

Regardless, the T-15 is an innovative design which seems well-suited to braving the heavy anti-tank weaponry on modern battlefields. Urbanized warzones like Aleppo and (soon) Mosul are proving a top concern for military planners, and a well-armored troop carrier likely to survive enemy fire would be a major asset for lowering friendly casualties. Even outside of cities, heavy APCs like the T-15 seem ideal for delivering assault troops to flush out the defenders of strong points in places like the fortified rebel-held villages in Syria or the shelled-out ruins of the Donetsk International Airport. (Ukraine, incidentally, is looking to make its own heavy APC, the BMPV-64, based on the hull of the T-64 tank.)

The U.S. military has no equivalent vehicle to the T-15, although it evaluated the Namer for potential use back in 2012. However, the Pentagon is already vexed by the prohibitive logistical burden of deploying the heavy seventy-ton M1 Abrams battle tanks to hot spots the world, and probably dislikes the idea of adding additional specialized vehicles of comparable weight to its arsenal. The Army may eventually elect to install active-protection systems on its Bradley IFVs as a stop-gap measure for dealing with missiles.