Russia's Unmanned Systems Are on the Move 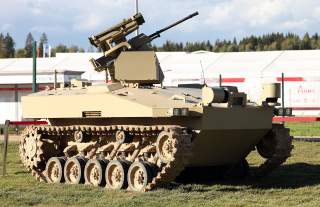 The Kalashnikov family of companies that now includes the makers of drones and boats, besides the famed namesake semiautomatic weapon, is getting to ready to present a heavy combat unmanned ground vehicle, according to the official press release via TASS news agency: “(We) will present, within the current year, a reconnaissance-strike robotic complex, weighing 20 tonnes, the company's Director General Alexei Krivoruchko told TASS.” The company made a decision not to present this prototype during upcoming August 22–27 Army-2017 military expo in Russia, which will feature thousands of technologies from multiple international vendors. It is likely that Kalashnikov's prototype would be based on its existing 7-tonne “Soratnik” model, developed by the same company back in 2016 and unveiled during Army-2016 expo.

Interestingly enough, the company did not plan to put Soratnik into serial production—instead, it determined to use it as a test-bed for continued development of other unmanned ground vehicles (UGVs) and related technology. When it comes to heavy Russian UGVs, Kalashnikov's prototype will enter a market that is getting crowded with competing technologies like “Vihr” and “Uran-9” heavy armored prototypes developed for combat operations. In order to keep up with current technological trends, Russian UGVs are designed for battlefield interaction with small-sized unmanned aerial vehicles (UAVs) such as quadcopters and multirotor models, and Kalashnikov's future model will be no exception.

During the first day of Army-2017, it was in fact announced that "Vihr"(Hurricane) heavy unmanned ground vehicle, (created on the basis of BMP-3 infantry-fighting vehicle) will undergo new testing this September. This UGV received an upgraded combat module that consists of a 30 mm a cannon and a twin machine gun, as well as grenade launchers. "Vihr" represents an unmanned military "suite" that includes  tethered and autonomous quadcopters for greater situational awareness, as well as MPP-100 mobile robotic platforms that can move along impassable roads and obstructions, including stairs in buildings, and fire from short-barreled weapons.

Army-2017 expo will feature a wide variety of unmanned systems, some of which were already showcased at the recently concluded MAKS-2017 air and space showcase in Moscow. Nonetheless, there is a lot of interest building up for certain unmanned models, such as the domestically produced Voron 777-1 (Raven) unmanned helicopter, which will be armed and capable of performing electronic warfare duties. At this point, the UAV has undergone all required state testing and is expected to enter service in 2018–2019. Voron can fly in autonomous and remotely controlled modes, and is capable of delivering a small-scale payload. This last function—payload delivery against potential adversaries—is receiving greater attention from Russian manufacturers and military users, as the majority of Russian UAVs in service today perform mainly intelligence, surveillance and reconnaissance duties. Moscow’s domestic combat UAVs are only slated to start entering service in two to three years. Small payload delivered via unmanned helicopter or other small aerial vehicles can prove devastatingly deadly, as was shown in the recent destruction of a massive Ukrainian ammunition storage at Balakleya, which was likely triggered by an explosive delivered via UAV. Moreover, Russia is currently ahead of their American counterparts when it comes to mounting electronic warfare technology on UAVs—in fact, the U.S. military is only starting to catch on to this emerging trend.

Army-2017 will feature many other existing UAV and UGV models, along with new prototypes. The expo will also feature new unmanned underwater vehicles produced by Russian companies that will be exhibited in a specially constructed facility capable of showcasing surface and other underwater technology.