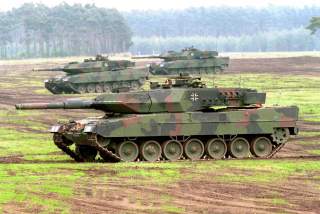 Shortly after the Brexit vote last June, those-in-the-know in Europe started calling for a renewed effort at a common European military force. A year ago this month, General Vincenzo Camporini, former head of the Italian general staff, told Defense News that all was now possible, as the obstructionist British were finally leaving. The imperative, as Defense News reported last September, has been variously described as ranging “from budgets and migration to a resurgent Russia or independence from NATO.” As Bloomberg reported that month, Czech Prime Minister Bohuslav Sobotka was asserting that the European Union really “can’t do without a common army in the long term,” though solely on the matter of money. Also that month, but from front-line Lithuania, Reuters reported that German Defense Minister Ursula von der Leyen was calling for a “Schengen of defense,” citing one reason in particular: “that is what the Americans expect us to do.”

As an American, I will now belatedly set the record straight. Americans, or at least those in the administration in Washington, would for once like Europeans to manage their own defense. Function, however, will be far more important than form. For decades we have been hearing about the profound importance of a common European Army, and almost nothing has happened. The countries of the European Union can collectively defend their eastern frontier, if they’d just care to do so. What they can’t do is do it as the European Union, so they should just stop trying. Instead, it’s time to move on from that idea, and pick up a few others that might actually work. Getting landward defense of Europe right has at least three organizational axes—national, industrial, and operational—and all can be achieved without exquisite coordination from Brussels.

National. Over lunch last December, a European defense official told me that stronger military capabilities really are not possible, except through the collective enforcement of the Union. In Europe, he said, there are only two kinds of countries: small countries, and those that do not realize they are small countries. That’s a clever line, I must admit, but I also counter that in Europe there is at least one large country that thinks it’s a small country. Germany has slightly more than half Russia’s population, and twice her economic output. That should count for something. But doing better in any way is challenging when the leader of the opposition (and former long-time head of the European Parliament!) continues to claim that a more powerful Germany is an objective “no one could want,” because of something about history.

Again, as an American, I will set the record straight. Germans have no idea how much we want this. Actually, many probably do, because they know that the Trump Administration does expect it, and so they're repeating the tired trope in hopes that we’ll stop asking. Frankly, this hostility from some corners of the European political establishment about actually defending Europe rather calls the bluff. How could Europe possibly have a single army when the German Army isn’t even allowed to send a single panzer division to backstop the Baltics? The “Enhanced Forward Presence” battalion is appreciated, but don’t call it impressive. After watching this, we can forget about that long-proposed interim step of assigning separate responsibilities to different countries’ military forces. Discounting the domestic disinterest in spending more, Harvard University's Yascha Mounk recently explained the problem from the other side in “Germany First” (The National Interest, September-October 2017, p. 37):

For if each country contributes some core function to European defense capability, then every country enjoys de facto veto power over the missions all countries can undertake. And this, in turn, means that the ascent of one far-right populist allied with President Putin could in effect neutralize the capabilities of all European powers. One plus one plus one plus one plus one may then add up to zero.

In short, building a European Army is a non-starter. So how can Europeans just get on with rebuilding robust European military forces as a continental of equals? By thinking a little less like Americans, a little more like Russians, and otherwise distinctly for themselves.

Industrial. To understand why this is so possible, note that coupled to the obsession with a European Army is another hope, perhaps less futile but still unconsummated—that of a single market in European defense materiel, or at least a unified European defense industry. Europe, we have been told for some forty years now, simply must rationalize its defense industrial base, or individual countries will continue to pay too much for too few weapons. The problem, as my colleague Elisabeth Braw wrote earlier this month for the Wall Street Journal, is that “too much emphasis on national pride hinders joint procurement and wastes valuable resources.” The argument is appealing, but the support is not often econometrically detailed. For in these lamentations, just how Russia manages to be so menacing, with almost total autarky in its own military resourcing, but just one-tenth the European Union’s economic output, is never addressed.

It is true that the Russians, following the collapse of the Soviets, did even more thoroughly rationalize their base of production beyond the already-centralized socialist approach. In almost all sectors, there are single or at most double sources of major systems. Uralvagonzavod makes the tanks, Kurganmashzavod makes the troop carriers, Kalashnikov makes the small arms, and the aptly-named Russian Helicopters makes the helicopters. The storied names of Ilyushin, Irkut, Mikoyan, Sukhoi, Tupolev, and Yakovlev are now all part of United Aircraft. These consolidations may be theoretically celebrated in some European circles, but in the United States these days, the administration’s defense-industrial review might call them potential single points of failure.

Consider just land combat systems. The T-72s that still equip much of the second-line forces are not greatly feared by NATO tank crews. Uralvagonzavod has built a few hundred T-90s for the Russian Army, but none since 2010. Its T-14 series of Armata tanks and other armored vehicles started to emerge in 2015, when one infamously broke down during the rehearsal for the Victory Day parade in Moscow. Fairly, the T-14 could prove a very lethal tank, but it's also very expensive, and just how the Russian Army will afford them remains unclear. On their petroleum-dependent economy, the Russians are not likely to manage those military buildups they ballyhoo, at least not with the Saudis pumping and the Americans fracking. If anyone in Russia was hoping for a innovative and inexpensive solution, long ago that got consolidated away.

To be sure, in Europe, there remains overcapacity in production, and a surfeit of duplication in design. That said, much of Europe has actually standardized on Germany’s Leopard 2 tank, Sweden’s CV90 infantry fighting vehicle, and often both. Britain, France, and Italy do stand apart with modest fleets of home-built tanks. But the British have hired American firm General Dynamics to build the latest version of its Austro-Spanish medium tank for the formation reconnaissance regiments, and to a panoply of Greek names (Ajax, Ares, Athena, Apollo, Atlas, and Argus). France may yet cooperate in the development of Germany’s eventual (someday) Leopard 3, and the Poles are interested in playing in the project too. Italy’s new project is a wheeled tank-destroyer, the Centauro II, which may be perfectly appropriate for an army far from the Vistula River. The Americans liked the original Centauro enough to borrow a few while their Strykers were being built, and the wheels of those Strykers have proven useful for dragoon rides through the Baltics.

So how is this remarkably worse than American plans? The US Army deserves credit for pursuing a surefire course of modernization: Abrams M1A2 SEP v3 tanks, Bradley M2A4 tracked troop carriers, new 30 mm turrets and Javelin missile launchers for the Stryker wheeled troop carriers, Paladin M109A7 armored howitzers, and Bradley-derived replacements (AMPVs) for the aged M113s. But note the numbers: two, three, four, seven—everything is a derivative design. The US Army has been effectively committed to working with just General Dynamics and BAE Systems, so new ideas are often seen as not-invented-here. The Army has also proceeded through a series of developmental cancellations in the past twenty-five years (AGS, FCS, NLOS-C, GCV), with just one successful big new concept—that Stryker, which was basically an up-armored but under-gunned Canadian LAV-III. Take note Europeans: if you want more dramatic innovation in design, then diversity in purchasing is no vice. Perhaps neither Russians nor Americans provide quite the model here.

Operational. In his briefing Land Warfare in Europe: Lessons and Recommendations from the War in Ukraine (September 2016), Peter Doran of the Center for European Policy Analysis (CEPA) lamented that the British, German, and French Armies have only 225, 227, and 240 tanks in active service. Collectively, though, that’s 692 quite capable Challenger IIs, Leopard 2s, and Leclercs. Somehow he forgot to count even the Leopards from the Polish Army, or any others for that matter. According to the IISS, the entire Russian Army has about 550 T-90s, and some of those are in Siberia, watching the Chinese. The T-14 is barely out of prototyping. Thus, the problem lies not with the balance of numbers. As noted above, the solution starts with political will. As Michael Shurkin of RAND wrote earlier this year, “Britain, France, and Germany could each muster and sustain a heavy brigade, albeit at different rates,” to help defend the Baltic Republics. The difficulty, Shurkin continued, is that “sustaining these forces would also require significant strain” for the national military establishments behind them.