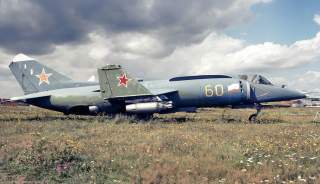 Everyone’s heard about the Harrier jump jet. Arnold Schwarzenegger used one to blast terrorists in True Lies. The Royal Navy beat him to the punch when it used a few dozen to score twenty air-to-air kills for zero losses against Argentine fighters in the Falklands War. The United States Marine Corps, too, has had a lasting affection for Vertical Takeoff Or Landing (VTOL) jets, which can be operated from small amphibious carriers and deployed to forward operating bases.

However, it’s less remembered that the Soviet Union developed its own jump jets and fielded them on its first aircraft carriers. It even dispatched a few for combat flights in Afghanistan. Even stranger, the design DNA of the Russian jump jets ended up in the most expensive weapons program in history, the F-35 Joint Strike Fighter. The reasons why it abandoned the troublesome aircraft a quarter century ago point to the problems inherent to VTOL jet technology.

The Soviet Union began experimenting with VTOL technology in the 1950s with a bizarre test rig called the Turbolet, which resembled a mashup of a space satellite and a crane conductor’s cab. It mounted an RD-9BL turbojet engine, taken from a MiG-19, oriented downwards to provide vertical thrust, while four directional thrusters on the arms were used for maneuvering. Though it could hover around on its jets like helicopter, the Turbolet didn’t have a proper horizontal-thrust flight mode.

As the British demonstrated the capabilities of the P.1127—the ancestor of the Harrier—in 1960, the Soviet Union was spurred to make a proper VTOL airplane, the hideous-looking Yakovlev Yak-36. It had two R-27 turbojets with intakes squashed together in an open nose, with the rear nozzles capable of rotating to provide vectored thrust. Compressed air thrusters on the tail, on the tips of its undersized wings, and at the end of its unicorn-like nose boom provided directional maneuvering. It took five years of testing to get the Yak-36 to the point where it could transition between vertical liftoff and horizontal flight. Lacking the range and carrying capacity to serve as a proper combat plane, the Yak-36 was instead a stepping stone to the carrier-borne Yak-38.

The Soviet Navy at the time was tentatively dipping its toe in the water of operating aircraft carriers, starting with Moskva-class helicopter carriers in the 1960s. It wasn’t ready to commit to building the enormous super carriers with long flight decks used by the U.S. Navy. VTOL aircraft seemed to offer a way out.

Thus, the Kiev, the first true Soviet aircraft carrier when it was commissioned in 1975, was designated a hybrid cruiser-carrier. The front deck of the Kiev and its sister ships was bristling with antiship and antiair missiles and even torpedo tubes, while the flight deck at the rear housed sixteen Ka-25 antisubmarine helicopters and around twelve Yak-38 jump jets. The latter had stubby wings with folding tips to facilitate storage. These often used a runway angled on the port side of the Kiev to make short take of runs with added lift from jump jets. This was preferred over a completely vertical liftoff because it consumed less fuel and permitted a heavier weapons load.

The Yak-38, code-named Forger by NATO, actually entered service in 1976, three years earlier than the Sea Harrier. Like the British plane, it could fly just short of the speed of sound, at around 680 miles per hour. Unlike the Harrier, it had two dedicated lift jets behind the cockpit in addition to a single RD-27 vector thrust engine; the additional jets resulted in higher fuel consumption, limiting range to around two hundred miles at best, and less if it performed a vertical takeoff. The Soviet Union produced 231 Yak-38s, including fifty-two upgraded Yak-38Ms in the 1980s with more powerful R-28 engines and more rugged landing gear.

The most important differences between the Yak-38 and Sea Harrier aircraft lay in payload: the Yak-38 had no radar, limiting its potential as a fleet defense fighter. Its air-to-air armament was confined to small R-60 heat-seeking missiles with a maximum range of five miles, as well as optional twenty-three-millimeter cannon pods. For ground attack, the Yak-38 had just four underwing hardpoints for bombs or unguided rockets, and had a small maximum bomb load between one thousand and two thousand pounds—about one-quarter of what the Harrier could carry. The Forger could also launch Kh-23 antiship missiles with a range of a few kilometers, but the Forger’s pilot would have had a difficult time controlling the manually guided weapons without a back seater.

It did not help that jump jets are even more complicated, and more accident prone than regular fighters. By the end of the Kiev’s first cruise with Yak-38s on board, only one of the six aircraft embarked was operational. The temperamental Forger was unpopular with pilots, too. The Yak-38’s designers had observed that if one lift jet broke down, the other would spin the aircraft over on its side. To protect the pilot, an automatic ejection system was designed to detect sharp changes in pitch and immediately eject the pilot at an angle away from the carrier’s forecastle. Predictably, this well-intentioned safety measure was triggered unnecessarily on many occasions, causing a loss of the airplane and the pilot’s career prospects.

What was the Yak-38 actually good for? Certainly, it would never have wanted to tangle with a proper fighter like the F-14 Tomcat, with more than twice the speed and longer-range armaments. Nor did NATO have a large fleet of maritime bombers like the Tu-95 Bear, though the Forger could have been used to hunt down lumbering P-3 and Nimrod patrol planes. Russian sources often characterize the Forger as a “Sturmovik” (attack plane), and it could have conducted limited ground strikes, though its applicability in a NATO–Warsaw Pact confrontation would surely have been limited.

But could have Yak-38 have been used from forward airfields on land, as envisioned for U.S. Marine Corps Harriers? In fact, the Soviet Union tested out the concept when it deployed four Yak-38s for combat missions in Afghanistan in 1980s, and some sources maintain participated in a few air strikes targeting the mujahideen, though details are scant.

Overall, though, it did not go well. The Forger’s engines had difficult performing in high temperatures, the heat from the lift jets rapidly damaged takeoff surfaces and kicked up tremendous dust that clogged engine intakes. In the end, the Yak-38 simply lacked the range and weapons load of alternative such as the Su-25 Frogfoot attack plane. While the Yak-38 could have used its jump jets for pop-up attacks like a Hind attack helicopter, it would have been just as easy to hit and far less well armored. To be fair, however, a Yak-38 veteran in the documentary clip below argues that these problems could have been overcome with persistence and that the Forger had potential, but Soviet commanders felt otherwise.

In truth, the Forger’s limited capabilities were due to it being a transitional airplane, meant to give the Soviet Navy experience in operating carrier-based fighters while it developed a more capable supersonic VTOL fighter, the Yak-41M (codenamed “Freestyle” by NATO).

The Yak-41M first flew in 1987 after a decade of development. It was distinguished by two tail booms trailing well beyond the fuselage, and a large afterburning R-79 vector-thrust turbojet fan nestled in between. Another two lift jets were located behind the pilot. The Yak-41 was capable of attaining Mach 1.4, had a range of 1,300 miles, and importantly mounted a radar and could carry both short- and long-range air-to-air missiles, making it vastly more capable than the Yak-38 and even the Harrier.

However, as the Soviet Navy became the Russian Navy in 1991, it lost interest in VTOL aircraft in favor of conventional fighters that could operate from the newer Kuznetsov-class carrier. Even more importantly, Russia was broke. The Yak-36s were all retired in 1991—a third of them had already been lost in accidents!—one of the Kiev-class carriers was scrapped, and the remaining three were sold. The Kiev and Minsk now serve as a hotel and theme park in China, while the Admiral Gorshkov has become the Indian Navy’s sole active aircraft carrier, INS Vikramaditya. While the Kuznetsov, with its ski-jump-style flight deck, suffers from numerous shortcomings, the MiG-29K and Su-33 strike planes it carries are far more capable than the Yak-38.

Funding for the Yak-41 also dried up. However, in a bizarre postscript to the Russian jump jet story, Lockheed Martin actually entered into cooperation with Yakovlev in the early 1990s, providing around $400 million to produce non-flyable Yak-141 prototypes for study. The Yak-141 may have influenced Lockheed’s design of the X-35 Joint Strike Fighter, which the Marine Corps insisted must come in a VTOL-capable variant. Today the Marine Corps is operating the F-35Bs with a vectored tail pipe arrangement similar to the Yak-141. However, critics of the Joint Strike Fighter argue that even the non-VTOL variants have had their flight performance hampered by the design compromises necessary to accommodate the lift jets.