S-400, New Cruise Missiles and More: How Russia's Military Is Back in a Big Way 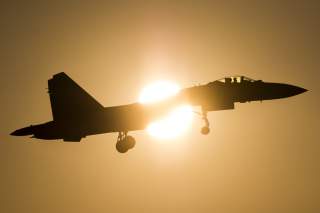 As the Russians are going home from Zapad-2017 (even as a Russian Spetsnaz regiment begins the next joint exercise in Belarus), we can take a look at some of the interesting trends demonstrated in the exercise. Of considerable interest are the military technologies used.

Russia has spent considerable resources rearming with precision and next-generation weapons, extolling how this high-tech investment bolsters the economy. While many systems have been adopted in the Russian Armed Forces in the past decade, four have acquired something of their own cults of personality in the Russian press: the Iskander surface-to-surface ballistic missile, the Kalibr cruise missile (especially the land-attack variant), the Bal coastal-defense missile, and the S-400 Triumf air-defense system. All of these systems except the Kalibr (which caused its own headlines elsewhere in the world during the exercise) took part in Zapad and can be assessed in a modicum of detail in the open-source world.

The Iskander system was publicly deployed at the Luga poligon, the northernmost of the ranges where Zapad-2017 took place, and conveniently nearby the peacetime location of the Iskander brigade of Leningrad Oblast near St. Petersburg. On September 16, the last day of the first defensive phase of the exercise, an Iskander formation deployed to a designated areas and electronically targeted important force positions of the enemy and test-fired at least one missile. These simulated deep strikes against the enemy were also undertaken by Tu-22M3 bombers starting the previous day in the exercise. The Iskanders were also joined by some of the last Tochka-U missiles in service with the Russian military. There are at most two Tochka units left in the Russian military and Russia intends to replace all Tochka formations by 2020. The Belarusians also deployed their Tochkas in the exercise on September 16, highlighting their joint training with a radiation, chemical and biological protection unit to provide smoke cover for the missiles as they prepared their calculations to target enemies.

The Bal coastal-defense missile has been making appearances near Russian naval bases around the country over the past couple of years. Having entered service in the Baltic Fleet in late 2016, it would have been more surprising had it not participated in Zapad-2017. This moment duly came on September 19 as combat crews entered a target destination and radio-technical teams then confirmed the destruction of the enemy. More curious than this was the relative frequency of articles in the Russian press about this coastal-defense strike at the time, whereas the sea launch that same day of an anti-ship missile by the Baltic Fleet corvette Sobrazitelny garnered relatively little attention.

The S-400 was also out for Zapad-2017 alongside the other standbys of Russian air defense, but its biggest headline came from a NATO country just before the exercise started. On September 12, Turkey finally signed the contract to purchase S-400s from Russia after months of negotiations. Despite this obvious coup, the Russian media hastened to point out that the S-400’s technology would not be lost to NATO because of this deal. Whatever other strategic messages Russia might have sent with Zapad-2017, they are certainly dwarfed by the potential implications of this sale.

Meanwhile, even further afield from the poligons of Belarus than Anakara, the Kalibr long-range sea-launch, land-attack cruise missile was fired from two one-year-old Varshavyanka-class submarines, the Veliky Novgorod and the Kolpino, into ISIS-held territory near Deir es Zour in Syria. This indeed was the second of three sets of Kalibr launches into ISIS territory this month: the first occurred on September 5 and the most recent on September 22.

However, despite these big-ticket items grabbing headlines both in Russia and in the West, the true military technological innovation demonstrated in Zapad-2017 was the use of improved systems for electronic reconnaissance, particularly UAVs and GLONASS-supported systems.

In a repeat of tactics widely demonstrated in the Donbas, UAVs were used for directing the targeting of heavy multiple launch rocket systems (MLRS). However, UAVs were used throughout Zapad-2017 to coordinate troop activities. They were considered critical components of the plans for conventional ground forces to defend Kaliningrad Oblast from attack. From the opposite perspective, air-defense units attached to maneuver formations practiced shooting down enemy UAVs. This trend has also been reflected in other regular Russian military exercises outside of Zapad-2017, but this does not detract from the ample demonstration of this technology’s centrality to how the Russian military plans to acquire and control information on the battlefield.

The other critical piece of Zapad-2017 emulating tactics now being adopted in the Russian military at large is the integration of the KRUS Strelets complex. This device allows GLONASS-enabled navigation to units and was specifically employed by a Russian unit engaging in a classic Russian tactical maneuver during Zapad-2017: an encircling operation to the enemy’s rear. This integration of space-based platforms onto the battlefield of Zapad demonstrates a major boon for Russian operational capabilities.

Russia’s regular strategic-operational exercises, Zapad, included are capstone events for the General Staff to demonstrate how it intends to answer potential war scenarios. These technologies will clearly form the backbone of Russian planning at least for the next few years.