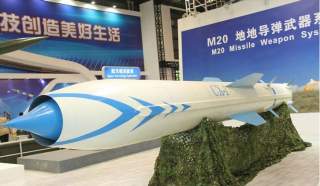 China’s latest anti-ship supersonic cruise missile may be coming to a theater near you soon.

As has seemingly become an almost annual tradition, China used Airshow China in Zhuhai last month to unveil a new anti-ship missile. The Chaoxun-1 (CX-1) is a supersonic anti-ship cruise missile built by a subsidiary of the China Aerospace Science and Technology Corporation (CASC), a major Chinese space and defense company. According to CASC, the CX-1 is a two-stage ASCM with a range of up to 280 km while carrying a 260-kilogram warhead. The missile also has a circular error probability of 20 meters, and high-altitude speeds of Mach 2.8-Mach 3.

Initially, CASC will produce two CX-1 variants: the ship-launched CX-1A and the ground-based road mobile CX-1B. Although the ASCM was designed primarily to target ships, it also reportedly has a second, land-attack function as well.

The CX-1’s presence at the international airshow strongly suggests that Beijing intends to export it. In addition, because its range is less than 300 kilometers and its payload is less than 500 kilograms, China would be able to export it without violating the Missile Technology Control Regime (MTCR).

However, even if China intends to export the CX-1, it still must find buyers for the missile. Pakistan has long been the primary recipient of Chinese arms, with Islamabad purchasing some 55 percent of all Chinese arms exports between 2008 and 2012. This has included anti-ship missiles. For example, Pakistan is the only foreign country that operates the C-602/YJ-62, a subsonic anti-ship missile that China unveiled at Airshow China in 2006.

Beyond that, the potential customer list for the CX-1 gets murky. Iran could potentially be interested, as it has relied on China for anti-ship missiles in the past. Most notably, the Iranian Navy used Chinese Silkworms to target Persian Gulf oil tankers during the Iran-Iraq in the 1980s.

At the same time, Iran’s indigenous defense industry has made large strides since the 1980s, which may limit Tehran’s demand for the CX-1. Interestingly, Iran’s past reliance on Chinese missiles may limit its demand for the CX-1. That’s because the Fateh-110 tactical ballistic missile that Iran first tested in 2002 is based on the Chinese DF-11A., and the Fateh-110 in turn served as the basis for Iran’s new Khalij Fars anti-ship ballistic missile, which —according to the Pentagon—Iranian units have already begun fielding. The Khalij Fars is believed to have a range of 300 km and carries a 650 kg warhead. Thus, given the Khalij Fars and other existing anti-ship capabilities, its unlikely that Iran will be a major purchaser of the CX-1.

Beyond Iran and Pakistan, there aren’t many countries that readily come to mind as potential customers. Myanamar has purchased Chinese anti-ship missiles in the past, however, it has sought to reduce its reliance on Beijing in recent years. Some reports have also suggested that China could look to South America or Africa to sell the CX-1, but these did not mention any countries in particular.

In any case, most countries can already purchase similar ASCMs from countries like Russia and India, and Moscow in particular has long-standing politico-defense relations with many of these. In the end, the CX-1’s success internationally will likely come down largely to price. Unless China can offer the missile at a price below comparable ASCMs, it is unlikely to find much success in attempting to export the CX-1.

Zachary Keck is the new managing editor of the National Interest.