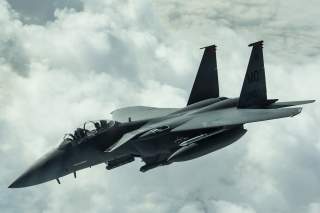 Yesterday, the Senate Armed Services Committee, under the leadership of committee Chairman Senator John McCain (R-AZ), released its much anticipated defense white paper, Restoring American Power. The study makes a powerful case for a significant and sustained increase in defense spending, one which would require elimination of the Budget Control Act’s (BCA) limits on defense budgets. It provides a clear-eyed description of the growing number and quality of threats facing this country as well as an assessment of secular decline in the size and capabilities of the U.S. military.

Based on its own analyses and testimony from senior military leaders, the white paper concludes that the United States military cannot accomplish its strategic objectives. When one considers the intersection of the expanding set of demands for U.S. forces overseas, the growing threats posed by Russia, China, North Korea, Iran and international terrorism, and the decline in the U.S. military’s readiness and modernization, it is difficult to conclude other than that the United States is no longer the world’s superpower. Years of declining defense spending, government shutdowns and Continuing Resolutions have combined to create a hollow military just at the time that multiple serious threats to U.S. vital national security interests have exploded on the world stage.

Restoring American Power is to be commended for not bowing to ‘inside the beltway’ fashion with respect to increases in discretionary spending nor to the threat from budget hawks among the Republican majorities in Congress. It boldly calls for the elimination of the BCA and an increase in the defense budget for FY2018 to $640 billion or $54 billion above President Obama’s proposed budget with some $430 billion additional spending over the next five years.

But the white paper doesn’t just propose throwing money at the defense establishment. It makes a compelling case for a redesigned U.S. military, one appropriate to the threats and needs of the second decade of the 21st Century. The primary threat to this nation’s security comes from significant nation states with large and increasingly-capable militaries and even nuclear weapons. The U.S. military must be able to prevent war with nation-state rivals by being able, in the event deterrence fails, to deny the aggressor’s objectives or impose devastating costs. The white paper concludes from this that “our military must be sized, shaped and postured to deter and, if necessary, wage and win conventional wars in three priority theaters: Asia, Europe and the Middle East.” In addition, ways need to be developed to deter so-called “grey zone” conflicts below the traditional threshold for the employment of conventional forces and to enhance the U.S. strategic nuclear deterrent.

Unfortunately, this country is a long way from having a military capable of achieving the goals set out for it in this study. The U.S. military today is a pale shadow of the force built during the last decades of the Cold War, the force that won Desert Storm and Operation Iraqi Freedom. It is living off the residuals of the Reagan-era buildup. Constant deployments, a lack of adequate resources for readiness and inadequate modernization have created a hole out of which the military must dig itself before it can actually become a modern fighting force.

Wisely, the Restoring American Power focuses on what can be done in the next five years. There is too much uncertainty both at home and abroad for a true long-range plan. In addition, there is that hole of deferred maintenance, missed training opportunities and absent modernization that must be addressed first.

In addition, the modernization requirements for a 21st Century high-end military exceed the capacity of the defense industrial base in the near-term.  With respect to the Navy’s goal of a fleet of 355 ships – the current number is 274 – the paper observes “the shipbuilding industry and workforce, as well as the Navy’s own personnel, simply cannot grow fast enough to execute this goal” in the next five years. But the white paper proposes a ramp up of the industrial base and Navy to increase shipbuilding from 41 to 59 ships over the five-year period. Even more interesting is the suggestion that the Navy focus more on undersea platforms, manned and unmanned, terminate the Littoral Combat Ship program at 28 hulls in favor of a clean sheet design for a new Small Surface Combatant and begin transitioning from an all large-deck carrier force to a high-low mix of big and medium-deck vessels.

The white paper saves much of its proposed budget increases for the Army. Given that, as the paper observes, the Army has not modernized in decades, the problem is both acute and extremely challenging.  A key feature of the Army’s near-term modernization strategy must be to leverage existing upgrades and evolutionary designs. This includes Stryker lethality enhancements, improvements to the Abrams tank, Bradley fighting vehicle and Paladin artillery vehicle. The paper calls for upgrading five armored brigade combat teams. There also needs to be long-range fire systems and munitions to increase both range and lethality.

Perhaps the most interesting recommendation is to increase Army end-strength above 500,000. Today the Army is too small to meet all its commitments. The result is a hollowing out of units. A steady increase of about 8,000 a year will allow the Army to fill holes in its existing formations and to prepare for the creation of new formations that should be forward deployed, particularly in Europe. The white paper makes a compelling case for rethinking the decision made at the end of the Cold War to withdraw virtually all the U.S. armed forces to the continental United States and to try and create an expeditionary military. Forward deployed forces are vital to both deterrence and reassurance. They also help set the potential battlefield in ways that complicate would-be aggressors’ planning for war.

The paper also calls for smart investments in air power, amphibious forces, space, missile defense, a modernized nuclear force structure and supporting infrastructure and cyber capabilities. Wherever possible, existing production lines should be ramped up, like the F-35. All of these make sense and are sorely needed.  However, its suggestions for the future of the Navy and Army are the most intriguing and bear careful examination and discussion.

The SASC white paper is a thoughtful, well-reasoned, yet bold document. It is a good place to start the debate on modernizing the U.S. military. If the Trump Administration is serious about making the U.S. military a force no state or terrorist group will seek to challenge, this document is the place from which to start in developing their own plan.