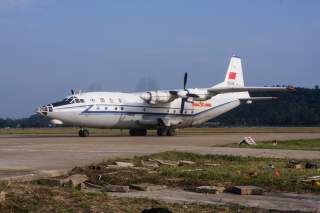 Satellite imagery published by the Washington-based Center for Strategic and International Studies (CSIS) has revealed the first confirmed deployment of a military aircraft, identified as a Shaanxi Y-8, at Subi Reef in the Spratly Islands.

Subi, or Zhubi Jiao in Pinyin, is occupied by China and claimed by Taiwan, Vietnam and the Philippines.

In recent years, China reclaimed land at Subi and transformed it from a reef into an island of nearly four square kilometers. It has a military base, a large harbor and a 3,000-meter airstrip.

A Shaanxi Y-8 is a Chinese-made transport aircraft based on the Russian Antonov An-12. Newer, upgraded versions of the Shaanxi Y-8 can be used for maritime patrol and signals intelligence.

The deployment on Subi is the third of its kind on China’s airstrips in the Spratlys. The first, according to CSIS, was a naval patrol aircraft, possibly a Y-8, which landed at Fiery Cross Reef in April 2016, and in January this year, two Xian Y-7 military transport planes were spotted on Mischief Reef.

On May 2, CNBC, quoting US intelligence sources, claimed China had deployed YJ-12B anti-ship cruise missiles and HQ-9B surface-to-air missile systems on each of the reefs as part of a military exercise that took place in April.

According to CSIS, most of China’s recent deployments in “the Big Three” – Subi, Fiery Cross and Mischief – follow “a pattern set earlier at Woody Island, the largest outpost and administrative seat” in the nearby Paracel Islands.

From harbor dredging and the construction of new runways and hangars and radar construction, upgrades at Woody have “served as a blueprint for things to come on China’s Spratly holdings in the south.”

China has already built new hangars and deployed J-10 and J-11 fighter jets on Woody and a similar development can be expected on Subi, Fiery Cross and Mischief.

According to CSIS, these developments show a “steadily expanding Chinese power projection capabilities from its outposts.”

China’s increasingly assertive behavior in the South China Sea is the reason why countries such as the United States, India, Japan, Australia and France are increasing their naval cooperation in one of the world’s most contested and sensitive maritime regions.