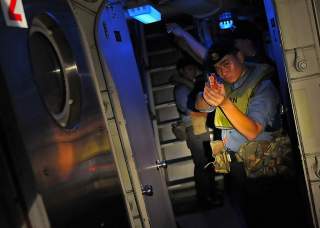 China appears to be boosting defenses at a key South China Sea military base.

“The direction in which the launchers are facing leads us to believe these are shore-to-ship missiles,” ImageSat International imagery analyst Amit Gur told reporters.

Yulin Naval Base is an essential submarine base for the South Fleet and houses China’s nuclear submarines. It is also home to a decent collection of surface ships. Over the years, China has been increasingly fortifying this particular military base, the tip of the spear for Chinese power projection into the contested South China Sea.

Systems similar to those seen in the recent satellite images were spotted two years ago. They disappeared a few months ago and just recently reappeared. Satellite images from March 15 show empty platforms, but images from May 8 depict what are believed to be shore-to-ship missile launchers.

ISI is unclear whether these suspected missile launchers, located on the western side, are the original systems or new weapons systems.

On the eastern side of the base, ISI detected “infrastructure that wasn’t there before and what looks like preparations for shore-to-ship missiles, just like on the western side,” ISI spokesman Gil Or told Defense News. The addition of new anti-ship missile systems may boost Chinese anti-access, area-denial (A2/AD) capabilities.

China has also been expanding its presence in the South China Sea through the development of defensive military outposts in the Paracel Islands and the Spratly Islands, according to the Asia Maritime Transparency Initiative.

The Trump administration has yet to challenge China’s maritime claims, which are disputed, through freedom-of-navigation operations, but the Navy has stated that it is committed to freedom of navigation and will conduct the relevant operations in the future.