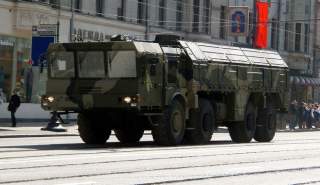 Speaking in Moscow this week, Saudi Arabia’s Foreign Minister Adel al-Jubeir said, "Saudi Arabia is set to intensify relations with Russia in all the spheres, including in the military field.”

He added: “Intensive contacts are taking place between the military delegations and specialists from both countries and a wide range of intended types of armaments from Russia are being discussed, including Iskander missile systems.”

As Robert Farley has noted on The National Interest, the Iskander is an extremely accurate short-range ballistic missile system that the Soviet Union developed at the end of the Cold War.

“The Iskander-M has a range of 400km, can carry a 700kg warhead of several varieties, and has a circular error probability of around five meters,” Farley wrote back in July 2014. “This makes it deadly to airfields, logistics points, and other stationary infrastructure along a broad front of conflict.”

Farley went on to point out, “The Iskander has the capability to retarget in flight, making it possible to engage mobile targets (including ships). It also has a set of built-in evasive maneuver techniques designed to make targeting from missile defenses difficult.”

Al-Jubeir made the comments following a meeting with Russian Foreign Minister Sergey Lavrov on Tuesday. The two diplomats were discussing a host of important issues, including a possible peace agreement to bend the Syrian Civil War. That discussion ended without agreement.

Al-Jubeir’s comments indicate that Saudi Arabia is interested in continuing to try to make inroads with Russia. For decades Saudi Arabia has relied on the United States for most of its military needs. In fact, this would be the first time that Riyadh purchased a major weapons system from Russia.

Saudi Arabia already operates a capable medium-range ballistic missile system in the form of the DF-21, which is purchased from China.

In 2014, Newsweek reported that China and Saudi Arabia had secretly concluded an agreement for the DF-21 systems back in 2007. As I wrote at the time of the Newsweek article:

“Although the greater precision of the DF-21’s are important, perhaps the DF-21’s biggest advantage is their solid propellant and road-mobile ability. Their solid-fuel allows them to be launched more quickly and requires less maintenance, which is especially advantageous to the Saudi military which often requires significant foreign assistance to operate more advanced weapons systems. The fact that they have road mobile launchers gives them greater survivability, although this characteristic isn’t particularly necessary given the kind of threats Saudi Arabia faces.”

The Central Intelligence Agency sanctioned the secret agreement for the DF-21 systems. It is unlikely that the United States would approve of a Russian sale  of the Iskander missile systems. For one thing, one reason the CIA likely sanctioned the DF-21 system is because neither the United States nor Russia produces medium-range ballistic missiles per the terms of the Intermediate-Range Nuclear Forces Treaty. Indeed, the United States opposed China selling Saudi Arabia the longer-range DF-3 ballistic missiles. In addition, U.S.-Russian relations are much more acrimonious than U.S.-China relations were, particularly back in 2007.