To Save NATO, Don't Enlarge It 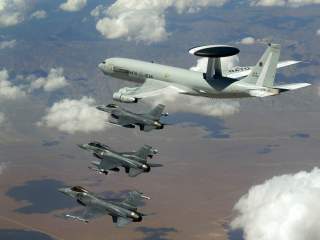 U.S. Secretary of Defense Ashton Carter embarked on a weeklong European tour on June 21 to reaffirm America’s commitment to the NATO alliance. The critical transatlantic security relationship currently faces strains from within and without, ranging from increased Russian military activity in Eastern Europe to intra-alliance disputes over burden sharing and debates over arming non-member Ukraine. Secretary Carter’s visit confirmed Washington’s support for its European treaty allies, including increasing support to the Very High Readiness Joint Task Force (VJTF) and pre-positioning equipment in Eastern Europe. It also highlighted the need to revitalize NATO and adapt the organization to the present transatlantic security alliance.

In order to further cement this relationship, the United States must make a clear statement about the future of the alliance, and resist the temptation to overextend its legal obligations to the North Atlantic Treaty.

The Ukraine crisis revived significant criticism over NATO expansion in the 1990s and 2000s. Critics allege that NATO’s growth violated a promise made by President George H.W. Bush to Soviet leader Mikhail Gorbachev not to expand NATO after the Cold War. This is a rumor that refuses to die. President Bush made no such commitment, but the myth has consistently reappeared since the 1990s, despite Gorbachev himself denouncing it. Russian officials are now giving this fabrication new life because it converges with their narrative of Western aggression in the ongoing Ukraine conflict.

Granting new NATO members like Poland and the Baltics states anything short of the same mutual defense commitment older allies enjoy would undermine European stability and damage the transatlantic relationship. This being said, reasonable people may debate the wisdom of NATO enlargement as a matter of history, and these discussions can inform future alliance policy.

NATO has limits, and officials must recognize these constraints. In particular, the United States and its allies should take a measured approach to post-Soviet states in Eastern Europe and the South Caucasus that aspire to NATO membership. As the organization’s de facto leader, Washington must articulate that, in the present security environment, countries like Ukraine and Georgia should continue to participate in affiliate programs like the Partnership for Peace. However, the United States should be equally clear that while it supports international norms on territorial integrity and national sovereignty, full alliance membership for these countries is not currently conducive to regional stability. This message is critical to NATO’s long-term viability.

Such a statement will confirm what is already tacitly accepted in Western capitals. At the 2008 NATO summit in Bucharest, France and Germany promised to veto membership for Georgia and Ukraine. German Chancellor Angela Merkel argued that Tbilisi could not be an appropriate candidate for alliance membership so long as its territorial disputes in Abkhazia and South Ossetia persisted. In other words, Georgia would be a liability for the alliance. If Tbilisi were admitted and attacked, a non-response by the organization would undermine the North Atlantic Treaty in the same way failing to protect any other member would, even though Georgia is far less defensible than existing allies. Because NATO operates by consensus and requires unanimity for action, these concerns shaped organization-wide policy despite then-President George W. Bush’s support for NATO enlargement. In any case, the August 2008 Russo-Georgia War vindicated the position Paris and Berlin advanced at the Bucharest summit.

Georgia’s internal (and external) conflicts effectively eliminated that country’s potential for NATO entry. The ongoing insurgency in Eastern Ukraine similarly disqualifies Kiev, whose candidacy was already blocked in 2008. Accordingly, Washington should stress that limiting alliance participation for post-Soviet states (excluding the Baltics) to structures like the Partnership for Peace is consistent with existing (albeit unstated) NATO policy. The United States can deflect Kremlin paranoia over Western encroachment in its so-called “near abroad,” which Russia uses to justify military action in the former U.S.S.R. At the same time, the United States and its partners need not simply acknowledge Russian invasions and occupation of non-NATO member territory.

It is worth noting that even under this strategy, individual NATO member states can still engage non-NATO post-Soviet republics on a bilateral level. Turkey does this with both Georgia and Azerbaijan in pursuit of defense coordination. In theory, nothing prevents the United States or its allies from using force to protect a non-NATO state. Of course, it remains highly unlikely that Washington would undertake such action in places like Ukraine and the South Caucasus, even in the context of present tensions with Russia. The United States must be straightforward and honest with aspiring NATO participants about their prospects for full alliance membership. These countries can then better negotiate their relationships with Russia and the West based on a more accurate assessment of their futures.

NATO enlargement is not the only path to overstretch. Currently, officials in Washington and some European states are debating providing weapons for the Ukrainian government in its battle with Russia and Kremlin-backed insurgents.  The United States should respect the concerns of its treaty allies when exploring other external policies in addition to alliance expansion. The Ukraine conflict is significant to the liberal international order crafted by the United States in the wake of World War II. However, the dispute bears more immediate and practical importance to European countries, some of which object to supplying Ukraine with weapons, owing to their geographic proximity to the conflict zone and extensive economic ties with Russia.

Why do all of these reforms matter? Why should the United States and its allies endeavor to rescue an organization like NATO?

The dissolution of the Soviet Union and the collapse of its network of satellite states in Eastern Europe removed the most obvious reason for NATO’s existence. However, one factor ensures that the alliance will continue to serve a purpose, regardless of whether or not threats emerge from external actors like Russia or foreign terrorism: Europe’s own violent history.

For nearly seven decades, NATO has held much European continent in a state of suspended animation, as far as security issues are concerned. Lord Ismay, the alliance’s inaugural secretary general famously quipped that NATO existed, “to keep the Russians out, the Americans in, and the Germans down.”

As this suggests, NATO emerged as much because of lasting memories as from future external threats. By embedding almost all of Europe in a unified security architecture, powers that warred for centuries like France, Spain, Germany, Italy, and the United Kingdom have no incentive to fight one another. Turkey, the perennial Muslim bogeyman at the gates of Christian Europe, is now tied to the continent’s security as a NATO member. This relationship (save a month-long spat with Greece over non-member Cyprus in 1974) continues to defy historic animosities, surviving political instability in Turkey and turmoil on the country’s frontiers.

Failure on the part of the United States and its allies failed to defend a fellow NATO member from outside attack would discredit the alliance as a collective defense apparatus. Not only would this invite outside actors to future (apparently consequence-free) incursions, countries might also leave NATO. In the organization’s absence, former member states would be subjected to new security pressures and might form new coalitions. Within a generation or two, Europe could be home to an array of hostile alliances, as exist in other regions like the Asia-Pacific and the Middle East, and in Europe itself at other points in history. As a bloc, the European Union (whose membership largely overlaps with NATO) is the world’s largest economy and China’s largest export market. This means that any major conflict in Europe would reverberate far beyond the continent and impact Western and non-Western states alike.

Viewing NATO solely as a Cold War era-relic used by a Russophobic Europe to extort U.S. support, as many critics do, implies a very narrow reading of history. After all, the only member state to ever invoke the North Atlantic Treaty’s collective security clause was not European and the move was not directed against Moscow: the country was the United States, and the impetus was the September 11 terrorist attacks.

NATO will not outlive its purpose: relations with Russia, nearby Middle Eastern countries, and relevant non-state actors may evolve, but peace and security are timeless values. However, the staying power of NATO’s founding principles is no guarantee that the alliance will endure. The United States must live up to its treaty obligations and ensure the integrity of the NATO alliance before it looks beyond the organization’s boundaries. Only in this way can NATO survive to meet the challenges of the 21st century.

Evan Gottesman is an editorial intern at The National Interest. You can follow him on Twitter at @EvanGottesman.