Scarborough ‘Shoaldown’: An Opportunity to Push Back Against China 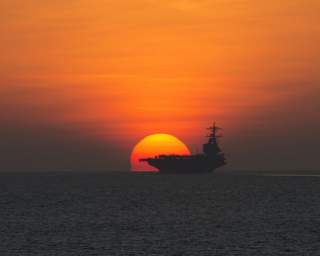 Over the last few weeks any lingering doubts have surely been erased when it comes to China’s so-called ‘intentions’ in the South China Sea. There is clearly only one goal, a single strategic objective: to dominate this important body of water and ensure Beijing holds de-facto sovereignty from the waves that move from Malaysia all the way to the shores of Taiwan.

Indeed, recent events prove that Beijing is not only consolidating its claims but now acting in a way that demonstrates China will utilize the South China Sea however it wishes, or, as reports declared a few years back, as “Lake Beijing.”

As first reported here, China has tested its new DF-41 intercontinental ballistic missile. Such tests, while certainly provocative but by now routine, come with an interesting twist: the missiles were fired over the South China Sea. Beijing pushed back on the report in almost comedic fashion, with a spokesperson explaining, “It is normal for China to execute scientific experiments within its territory [emphasis mine], and these experiments are not aimed at any specific country nor target.” Clearly the only “science experiment” that China was conducting was to measure the lack of international outrage over such an action — and Beijing has to be happy with the results.

But should we be all that shocked anymore? Such actions build on Beijing’s strategy to slowly change the status-quo one small move at a time. Each action is carefully crafted — nothing is ever done that would create a crisis that leads on a path towards kinetic conflict or war, however, over time, the cumulative impact puts Beijing in the driver seat with a clear course towards regional hegemony in the South China Sea.

So is there any place on the map where China could be challenged, a spot where Washington and its regional partners could turn the tables, making their intentions known that Beijing’s coercive actions will now come at the steepest of costs, and that they will no longer be able to so easily disrupt the status-quo?

Essentially stolen from The Philippines back in 2012 after the US helped broker a de-escalation of tensions–sitting clearly in Manila’s exclusive economic zone (EEZ) — could be the place where America could slow or possibly halt China’s dangerous ambitions.

So why pick Scarborough Shoal to make a stand and why now? Because according to various reports, it seems likely to be Beijing’s next island reclamation project. A report in The Diplomat explains that, “China is poised to take “decisive and provocative action” in the Spratly Islands. These sources report that China may dynamite Scarborough Shoal to build an artificial island to house military facilities…”

A Line in the Sand:

And while putting an emphasis on this one shoal can’t make up for the absence of a clear strategy for the South China Sea and the region when it comes to dealing with Beijing’s coercive and bullying acts in recent years, Scarborough Shoal could offer an opportunity to halt a dangerous trend.

In fact, Washington might already be laying the groundwork to make sure Beijing would not have an easy time reclaiming Scarborough after all. One of the toughest and battle tested symbols of US military power, the mighty A-10 Warthog, is now in the Philippines. A-10s as well as Sikorsky HH-60s helicopters “conducted a flying mission through international airspace in the vicinity of Scarborough Shoal west of the Philippines providing air and maritime situational awareness” recently according to a statement released by the U.S. military. “These missions promote transparency and safety of movement in international waters and airspace, representing the US commitment to ally and partner nations and to the Indo-Asia-Pacific region’s continued stability now and for generations to come.”

But what happens next is key. The Obama Administration should heed the advice of the Wall Street Journal with the US Navy sending a signal of “seriousness by parking a destroyer or two nearby.” Such a bold action would show China that America is serious about Scarborough and will not allow Beijing’s coercive actions to go unchecked forever.

Washington should also send UAVs to the Philippines to conduct 24 hours surveillance of the area around the shoal in an effort to not only enhance Manila’s maritime awareness but send a signal to Beijing that it won’t easily turn this shoal into its next “unsinkable aircraft carrier.”

Some would argue there is nothing the United States can do — well, short of war according to one expert, to halt China’s assault on the status-quo. Scarborough Shoal offers the perfect opportunity for Washington to begin to signal to Beijing that its actions from now on will have consequences–something the Obama Administration has failed to do. But the question as always is this: Will Washington act before its too late?

Harry Kazianis (@grecianformula) is a Non-Resident Senior Fellow for Defense Policy at the Center for the National Interest. He is the former Executive Editor of the National Interest and former Editor-In-Chief of The Diplomat. Kazianis is the co-author and Editor of the report: Tackling Asia’s Greatest Challenges: A U.S.-Japan-Vietnam Trilateral Report. He is also the author of the forthcoming monograph: The Tao of A2/AD. The views expressed are his own.