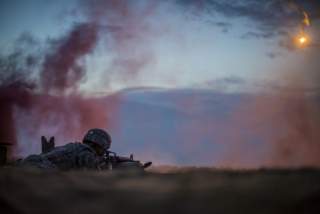 From 1618 to 1648 Europe was torn apart by a devastating and ruthless war. It was waged with fanaticism nourished by religious extremism absolving soldiers from atrocities because it was God’s will and done in God’s name. Out of this debacle came the Westphalian system giving rise to the nation-state.

Fundamentally the conflict was about who should have the right to define ethics, norms, values, and behavioral patterns in a Europe baffled after Martin Luther’s challenge of the Catholic Church’ and digesting the societal repercussions of the information revolution introduced by Gutenberg.

The current global picture resembles this picture in many ways--raising fears that we may be in for a reprise, one auguring the same degree of fanaticism with destructive effects multiplied by the sinister use of modern weaponry and technology.

Armed conflicts – observers and politicians shy away from using the word wars - no longer take place between nation-states. Instead, they are among people and within people taking no account of national borders and passports. They focus on who you are and people’s cultural identity. Since 1945 the world has grosso modo been reigned by an American value system. The international institutions projected American power and this went well because the rest of the world looked on the American model as successful and wanted to emulate it. The Americans themselves saw the model as the best one not only for them, but also for other countries and was willing to allocate a considerable share of US national income to ‘export’ the model. What is happening now is almost the opposite. A large number of people who felt neglected and slighted even degraded and ‘put in their place’ solely because they adhered to a culture out of tune with the American value system revolt in a violent and sometimes hateful way. They feel justified in administering the same bitter medicine to the US as they had to swallow – cultural revenge.

The US and its allies react - predictably - within the existing power structure and paradigm classifying the armed conflicts as among nation-states following the age old rules for such conflicts. They do not seem to have analyzed the evolving picture and underlying reasons. Therefore it is fast becoming asymmetrical warfare. The US and its allies register some results on the ground – encouraging them to go on – but have not succeeded in rolling the decisive attacks on the American global system back; on the contrary the attacks, in some cases pinprick attacks, gather sympathy and support from more and more hitherto marginalized people around the globe.

The conflict in Ukraine is easier to read and interpret than the conflict in the Middle East. President Putin says what he means and means what he says--albeit not saying everything he means! He depicts himself as the protector or patron of all Russians inside and outside of Russia stretching out to the ethnic Russians and/or Russian speaking people living in areas that used to be republics in the Soviet Union before its dissolution in 1991. The argument runs like this: The ‘West’ has extended the boundaries and ‘robbed’ Russia of its rightful place among the super powers, forcing ‘Russians’ to fight for survival in other countries inside an unfriendly  system often run by the same people who the Soviet Union treated as minorities – an humiliation without precedent in Putin’s eyes.

Putin is convinced that value based behavior (culture) among ethnic Russians are congruous, forming a strong bond, and justifying violating international rules, laws, and agreements. The ‘West’ is clinging to the rule bases international system anchored in respect for borders, nation-states and commitments. These two views cannot be reconciled. This is not a conflict about power balance that fits the pattern of well-known behavior seen over decades yes centuries; it is completely different and cannot be solved by applying analyses and methods originating from power balance recipes.

The same phenomenon can be detected full blown in the Middle East. The rebels or whatever label they should be given has changed name several times. From ISLS (Islamic State of Syria and the Levant) to ISIS (Islamic State of Syria and Iraq) to IS (Islamic State). This is no coincidence. Originally IS may have seen itself operating inside a nation-state and maybe using the nation-state concept, but now IS are trans frontier possible seeing itself governing people from Central Asia to the Atlantic Ocean.

No attempt is made to take over nation-states like Syria, Iraq or Lebanon. The goal is to brush aside these nation-states’ political systems exploiting the vacuum to establish a state (not a nation-state) for believers, followers, and adherents.

The ‘West’ counteroffensive is rooted in military ideology and thinking going back to von Clausewitz. His philosophy died with the end of the cold war. Conflicts which we encounter now may still be ‘war is the continuation of politics with other means’, but the difference is that the West links it to nation-states’ politics while the opposing groups do not.

The decisive power parameter in today’s world is the ability to shape perceptions; define in the eyes of a large majority of people what is right or wrong, permissible or not permissible, and justified or not justified. In other words shape a value based system that attracts and appeal to a majority of people - occupy the moral high ground defined by yourself!

Military involvement in Ukraine and the Middle East is unavoidable albeit its character and size is open for debate. Military ‘progress’ is welcome, but will only bring the ‘West’ closer to victory if the population living where the fighting takes place perceive such steps as necessary and proportionate to the situation. Even more important for the final outcome is whether potential or existing followers of the rebels outside the region itself read military results as a set back or defeat for the course - the endeavor to change the value system - pursued by the rebels.

Military engagement must be linked to a value based strategy aiming at winning the world opinion and in particular Muslims inside and outside the region for a systematic roll back of IS. The organization must not be allowed to present itself as innocent victims of the mighty American military machine fighting against US abuse of its power, denigrating and defaming Islam or for that sake other religions or identities.  In the same way standing up to Russia in Ukraine only gives hope of success if the ‘West’ manages to convince the global opinion that Russia is the aggressor violating not only commitments, but also behavioral patterns without which a global system cannot survive.

An optimist would glimpse a successful counter offensive staged by the ‘West’ promising victory. A realist discovers a disturbing picture of a conflict getting out of control. A pessimist has an inkling of a value based conflict going global haunting our societies for decades – in the same way as the thirty years war (1618-1648) did; a confrontation or rather a fight literally speaking about who has the right to determine the ethics, values, and moral norms in the future. Such a conflict will be evil and brutal. Fought among people it will divide families and groups hitherto safe in the conviction of shared and common values, but discovering that this was not the case. Worst of all: A value based conflict allows persecution, cruelties, oppression, even mass murder excused by referring to the victim’s different opinions.