A Secret Weapon to Stop the Ebola Crisis: The United States Military 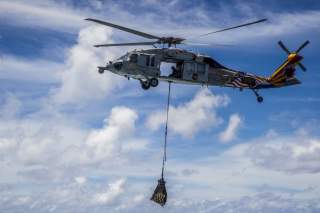 Reaction was mixed following President Obama’s announcement that he was sending 3,000 troops to Liberia to help contain the spiraling Ebola epidemic. Doctors Without Borders, the Nobel Prize-winning, normally pacifist NGO has been on the front lines of this fight begging for military support. Meanwhile, a couple of retired generals have blasted the president for the decision, asserting that it is a “misuse” of the military, whose job is to “fight wars, not medical battles.”

They couldn’t be more wrong.

The threat beyond Africa is real—the clock is ticking. Although the immediate threat from cases in Texas and Spain may be overblown, experts warn that the virus is mutating and if not stopped, will spread well beyond Africa, stressing the capacity of even more developed nations like our own to contain it.

Moreover, Ebola represents a significant security issue. As the disease spreads, so does panic—and panic leads to violence. CFR’s own Laurie Garrett observes, “Lawlessness will rise as Ebola claims the lives of police and law enforcement personnel, and terrified cops quit their jobs.”

As health workers die or quit—or as people stay away from hospitals for fear of contracting Ebola—they will begin to die of other, normally treatable health problems. According to Garrett, “Women will die in delivery, auto accident victims will bleed out for lack of emergency care, old vaccine-preventable epidemics will resurge as health workers fear administering them to potentially Ebola-carrying children, and child malnutrition will set in.”

Thus, as governments fail to cope with the outbreak and associated panic, the epidemic’s spillover effects will serve to cripple government infrastructure and societal structures, creating major security issues. This spiral into chaos, in turn, will only accelerate the spread of the virus and confound efforts to control it.

Smaller steps early on could have nipped this epidemic in the bud.  But we are well past that now. Only the military—indeed, only the United States military with its vast organizational and command and control capabilities—can do what is needed to coordinate multi-national efforts and contain this virus.  As with warfare, it is all about logistics and leadership.  Here is what the U.S. military brings to the fight against Ebola:

-Leadership and coordination: The United States is deploying half of the headquarters element of the 101st Airborne Division to coordinate multi-national and interagency efforts between several actors: the Liberian government, USAID, UN aid workers, and the United States’ own forces. This is a complex organizational challenge for which the U.S. military is uniquely qualified.

-Transportation: As commercial airlines show increasing reluctance to fly between affected countries, military transport will be needed to maintain the flow of medical workers and supplies. This includes critical aid like hygiene kits and protective gear.

-Training: Military medical personnel will be able to train 500 local health workers and volunteers a week in basic self-protection procedures to control infection. This empowerment of local workers will be the key to stopping this epidemic while also limiting the direct exposure of U.S. troops.

Such firm U.S. contribution represents an understanding that the Ebola epidemic constitutes a global challenge—one that must be met with a global solution. As with a fight against any adversary, a policy predicated solely on self-isolation and avoidance would not be a winning strategy. We will be most effective when we seek to stem the virus at its source.

This is a mission for which the U.S. military is uniquely qualified. Despite the false adage that the military’s role is only to “fight and win the nation’s wars,” it has carried out a myriad of humanitarian and stabilization operations in its 239-year history.

Doing so is not only a moral imperative—it also falls firmly within the United States’ national interests. The global community must unite to turn the tide against Ebola, and our nation—and its military—must play its part to lead it.