Secretary of State Rex Tillerson: “Business as Usual” with North Korea “Is Not an Option” 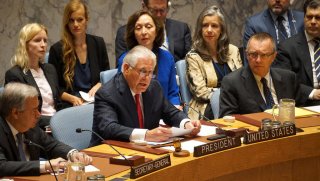 Secretary of State Rex Tillerson said “business as usual” with North Korea “is not an option” Thursday, at a special session of the United Nations Security Council.

“It is time for us to retake control of the situation” on the Korean Peninsula,” Tillerson said, while chairing the session. “I urge this council to act before North Korea does.”

“With each successive detonation and missile test North Korea pushes northeast Asia and the world closer to instability and broader conflict,” he told the council. “The threat of a North Korean attack on Seoul or Tokyo is real.”

Since the start of 2016, North Korea has conducted two nuclear tests and carried out over two dozen ballistic missile provocations. The North has tested short-range, medium-range and intermediate-range missiles, and it is clear that North Korea is developing an intercontinental ballistic missile.

Tillerson called on the members of the UNSC to take three actions to rein in North Korea.

First, all countries should “fully implement the commitments they have made regarding North Korea,” he said. These include UNSC resolutions 2270 and 2231, which were passed after the North’s fourth and fifth nuclear tests. “Those nations which have not fully enforced these resolutions fully discredit this body,” he warned.

Third, he said all countries should take steps “to increase North Korea’s financial isolation” through new and tougher sanctions. “We will not hesitate to sanction third country entities and individuals” that aid the North’s illegal activities, he said.

The aim is to put maximum pressure on the brutal North Korea. The U.S. is not calling for regime change. The focus is specifically on de-nuclearization.

Tillerson called on all countries to do their part, but emphasized China’s special relationship with Pyongyang, pushing Beijing to pressure North Korea. China’s representative pushed back, arguing that China is not the key to resolving the crisis on the peninsula, and that it is unacceptable to demand that one country solve the problem. Beijing is committed to denuclearization, but it is calling for dialogue.

China has taken some steps to restrict coal and use its influence to persuade Pyongyang against conducting another nuclear test. Beijing, however, continues to object to the deployment of a Terminal High Altitude Area Defense (THAAD) anti-missile system in South Korea, citing reasons related to national defense.

“We prefer a negotiated solution to this problem, but we are committed to defending ourselves and our allies,” Tillerson explained. “Diplomatic and financial levers of power will be backed up by a willingness to counteract North Korean aggression with military action if necessary.”

All options remain on the table as the U.S. and its partners pursue a campaign that will be “swiftly implemented and painful” to North Korea in order to resolve a problem that has puzzled world leaders for decade.