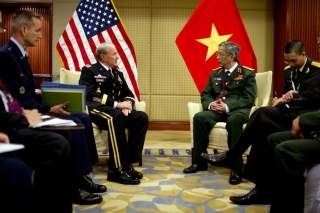 Last Friday, the Obama administration partially lifted the U.S. ban on lethal arms sales to Vietnam, which had been in place since the end of the Vietnam War in 1975. According to the Associated Press, on Friday, “State Department spokeswoman Jen Psaki told reporters the United States will now allow sales of lethal maritime security capabilities and for surveillance on a case-by-case basis.” These lethal arms sales will, for now, remain relatively limited, though the United States could sell Vietnam boats and planes, which would theoretically be used for Vietnam’s coast guard.

This first step in selling lethal arms to Vietnam, though heavily criticized by human rights groups because of Hanoi’s deteriorating record on political and religious freedoms, likely will be followed by greater arms sales, including naval and air force assets. And it is true that Vietnam’s government has increasingly cracked down on dissent of all types over the past five years. In particular, the government in Hanoi has waged a harsh campaign against Internet writers, bloggers, and social media activists of all types, jailing many and instituting some of the toughest restrictions on Internet and social media use of any nation in the world.

In general, as I have written, I think the Obama administration’s Southeast Asia policy has often overlooked human rights and democracy promotion, allowing the region to slide backwards in terms of political freedom, since the United States has said little about democratic rollback in many nations and has allied itself with some of the more autocratic countries in the region. This is, in general, a mistake, since the United States is alienating Southeast Asians while, in general, reaping little strategic benefit from its relationships with many of the more authoritarian nations in the region.

But Vietnam is the exception.  Of all the countries in mainland Southeast Asia, only Vietnam has provided–and will provide–enough strategic benefits for the United States to justify closer ties to such an authoritarian regime. Unlike in Myanmar or Thailand, in Vietnam the government, though repressive, has clear control over the armed forces, and though the Vietnamese regime certainly is guilty of a wide range of abuses, the actual Vietnamese military itself is, in many respects, less abusive and more professional than those of Myanmar or Thailand. Vietnam is, overall, more stable than Myanmar or even Thailand, and the population, despite the history of war with the United States, tends to be ardently pro-American. But there is no denying that Hanoi harshly represses dissent, minority rights, freedom of religion, and other freedoms.

Vietnam’s military is not only under civilian command but, more important strategically, is larger and, in a conflict, potentially far more effective than that of any other country in mainland Southeast Asia, including Malaysia and Thailand. Vietnam’s navy is professional and well-trained. Vietnam’s strategic location, right next to the South China Sea, puts it at the center of vital shipping routes and at the heart of one of the areas where the United States and China are most likely to come into conflict; Washington and Beijing are unlikely to come into conflict over the Mekong region, despite the Obama administration’s decision to re-engage with mainland Southeast Asia. Vietnam’s Cam Ranh Bay would offer the best harbor for U.S. naval vessels in case of a conflict in the Sea. And unlike Thailand or Malaysia, Vietnam, which has fought wars with China for centuries and shares a long land border with China, has few illusions about China’s rise, and is willing to back up its position on disputes with Beijing with skillful diplomacy and the real threat of force. What’s more, a younger generation of Vietnamese officials, who did not fight in the war, has come to dominate the foreign ministry and military; they see a stronger relationship with the United States as essential to Vietnam’s future security.

Paul Leaf, a defense specialist, offers a fine summary of Vietnam’s advantages as a partner:

Vietnam’s military outlays climbed 130 percent from 2003 to 2012—making it Southeast Asia’s second biggest defense spender as a proportion of GDP—which Hanoi is using to modernize its naval and air forces. Its location is strategically valuable: Vietnam shares an almost 800-mile border with China and it abuts the South China Sea. Finally, Vietnam is tough, having kept an outnumbered and outclassed group of vessels near China’s rig during their 75-day summer [of 2014] standoff.

As the most populous nation in mainland Southeast Asia, Vietnam also is an economy that, if it handles its current turbulence, has far more room to grow than most other nations in the region.

Does all of this excuse Vietnam’s harsh repression of dissent? Of course not. But foreign policy, at times, entails balancing strategy and values, and despite my own strong convictions about democracy and human rights, in Southeast Asia Vietnam is the one place where, to my own sadness, the strategic side of the ledger should win out. The White House should move forward with further arms sales. In an upcoming working paper, I will examine how the United States and Vietnam could build on arms sales and move toward a formal treaty alliance.