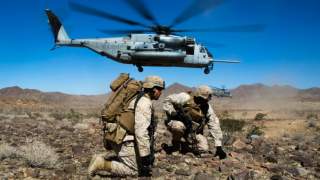 The Marine Corps turns 240 years-old today. On November 10, 1775, the Continental Congress adopted a resolution to create a Marine force composed of two battalions. Since then, the Marines have been “from the halls of Montezuma to the shores of Tripoli” and many other places as well.

You probably know that the Marine Corps’ motto is Semper Fidelis, or Semper Fi for short. It means “always faithful” in Latin, and it signifies a Marine’s loyalty both to the Corps and to the United States. What you may not know is that Semper Fi wasn’t the Corps’ motto until 1883. During its first century of existence, the Corps had a few unofficial mottos. These included “to the shores of Tripoli,” which commemorates the Marines’ service in the First Barbary War, Fortitudine (meaning “with courage”), and Per Mare, Per Terram (“by sea and by land”), which the Marines borrowed from the British Royal Marines.

No Marine has ever become president, but several have made it in politics. Secretaries of State James A. Baker and George P. Shultz both served in the Marine Corps, as did Senator John Glenn (who first gained fame as an astronaut) and legendary political consultant James Carville. Several baseball hall-of-famers are veterans of the Corps, including Rod Carew, Roberto Clemente, Eddie Collins, Bill Veeck, and Ted Williams. Marines who made it in Hollywood include Gene Hackman, Harvey Keitel, Lee Marvin, Steve McQueen, and George C. Scott. Comedians Drew Carey and Rob Riggle were Marines, as was the late, great Jonathan Winters. If you are old enough to remember Captain Kangaroo (Bob Keeshan), he was a Marine. Several famous musicians served in the Corps, including country legend George Jones, hip-hop artist Shaggy, and “The March King,” John Philip Sousa. Marines who made it in the business world include Tom Bell (Taco Bell), Tom Monaghan (Dominos), Bob Parsons(GoDaddy.com), and Fred Smith (FedEx).

The Marine Corps is the smallest of the four U.S. armed services in the Department of Defense, with roughly 185,000 active-duty personnel, deployed in the Pacific, South America, Africa, Europe, and the Middle East. To put that in perspective, the U.S. Army is about two and a half times larger with roughly 490,000 troops. But compared to most of the world’s militaries the Marine Corps is a giant. Countries that have armies smaller than the U.S. Marine Corps include France, Germany, Great Britain, Italy, and Japan.

Want to learn more about the Marine Corps? Col. Christopher McPhillips, one of five active duty U.S. military officers spending the year in CFR’s Studies Program, recommends three books in particular worth reading. Here they are, along with his brief summaries:

- Webb, James. Fields of Fire (1978). A novel about young men from different worlds plunged into jungle warfare as U.S. Marines in the An Hoa Basin of Vietnam in 1969. This book is a classic story of men under fire and combat leadership.

- Twining, Merrill B. No Bended Knee: The Battle for Guadalcanal (2004). A first person account of the battle to take Guadalcanal at all levels of war told through the eyes of the 1st Marne Divisions Operations officer.

- Gamble, Bruce. The Black Sheep: The Definitive History of Marine Fighting Squadron 214 in World War II (2007). An historical account of a famous air squadron and a detailed telling of what a typical Marine Squadron endured during the war in the Pacific.

If you want to know what all Marines are required to read, the Marine Corps has posted its reading list online. Marines.com also has a great timeline of the history of the Marines.

The official YouTube page of the United States Marine Corps posted this 240th birthday message, providing a moving reminder of the heroism and sacrifices Marines have made over the years