Senators Are Forcing the U.S. Navy to Buy Warships It Doesn’t Want 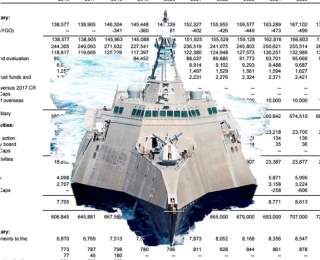 This year’s Pentagon budget originally included a small victory for taxpayers: it reduced its request for the troubled Littoral Combat Ship (LCS) to only one ship for $1.2 billion. “The Navy doesn’t want them,” Office of Management and Budget (OMB) Director Mick Mulvaney told Hugh Hewitt earlier this month.

Yet, while sailors and Navy brass may not want any more LCSs, members of Congress do.

The LCS program currently includes two variants, one built by Austal in Mobile, Alabama, and the other built by Lockheed Martin in Marinette, Wisconsin.  So it should be no surprise that, in bipartisan parochial posturing by those states’ senators, Senators Richard Shelby (R-AL) and Tammy Baldwin (D-WI) decried the negative impacts of buying one less ship on jobs in their home states during an appropriations hearing with Navy officials last Wednesday.

But their concerns are exaggerated if not outright false.

Acting Navy Secretary Sean Stackley, who also keenly shares the Senators concerns about the industrial base, assured them the budget as introduced would be sufficient to take care of jobs. Independent watchdogs have also found there is actually no compelling industrial base considerations in the near-term because shipyards will be building LCS under contract through fiscal year 2021. Large cost overruns, schedule delays, and a demonstrated lack of combat survivability and lethality discovered during operational testing and deployments should have resulted in cancelling, or at least slowing down, the program. What’s kept it going is pressure from Senators like Shelby and Baldwin.

In what must have been record-setting speed in pork pressure politics, the White House announced shortly after the appropriations hearing that they would include an additional LCS ship after all.

Sources told CNN the sudden change—which had no offset—was led by Rick Dearborn, deputy chief of staff of policy for the White House and formerly the chief of staff to the other former Alabama Senator, Jeff Sessions.

It remains to be seen whether this administration will truly put military effectiveness and taxpayers first, and how it handles a troubled program like LCS remains a key test. The Navy plans to stop buying LCSs once the current contract obligations are complete, and will instead purchase “frigates” that are supposed to have better survivability and lethality in combat.

However, while renamed, the frigate program largely appears to be the LCS by another name. Last month, the Government Accountability Office (GAO) urged Congress to slow down acquisition of the new frigate due to concerns the Navy would be making a multi-billion dollar commitment without sufficient information about the cost, design, or capabilities of what it was buying. The Navy has agreed to do so (thankfully), delaying contract award to 2020 and receiving praise from House Armed Services Committee Seapower Chair Rob Wittman (R-VA) for doing “due diligence.”

The ultimate success of those efforts will nevertheless depend upon the Navy’s discipline in truly assessing and addressing deficiencies in previous designs, and in resisting external interference by members of Congress to continue this program’s troubled trajectory.

Mandy Smithberger is the Director of the Straus Military Reform Project at the Center for Defense Information at the Project On Government Oversight, where this first appeared.