Shamefare: How to Push Back Against China in the South China Sea 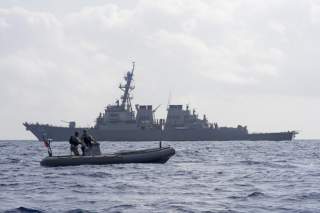 The rise of the People’s Republic of China (PRC) — when the history books have enough perspective to quantify and objectively examine its sheer spectacle — will certainly declare it the speediest accumulation of national power in all of human history. Whatever you think of its brutal authoritarian nature, Beijing has lifted hundreds of millions of Chinese out of poverty, secured most of its land borders and built a mighty navy and anti-access capability that would give its greatest competitor, the United States, major challenges in any open, kinetic conflict.

But Beijing’s rise comes at a steep cost, a cost that might be bared collectively by the Asia-Pacific region in the form of an increasingly open and aggressive challenge of the collective regional status-quo.

Open any history book and the problem is quite clear after a few pages: There is no more challenging dilemma in the long, tortured tale that is geopolitics than when a rising power challenges the status-quo — and its neighbors are usually the ones that suffer, and suffer mightily. History is littered with example after example of borders being cast aside, millions upon millions dead, countries leveled to near ash with one nation standing tall above all others.

Resentment towards the new hegemon, superpower or great power — whatever your choice of words — grows from generation to generation. A cycle of anger becomes ingrained and spread throughout history that proves near impossible to move past until enough blood is spilt — and a tragic pattern of war and chaos seems to take over a region.

Today, in the Asia-Pacific, we see the tragedy that is known as great power politics playing out again once more — especially in the South China Sea. Smaller nations around the region, especially Vietnam and other claimants of rocks and reefs throughout these rocky waters have been placed in the toughest of binds: how to push back against a much larger and rising power that seems bent on changing the status-quo. Hanoi and fellow ASEAN nations must be cautious — pushing too hard could sow the seeds of a crisis that could turn kinetic, however, doing too little only invites Beijing to slowly change the facts on the ground, or, in the case of the South China Sea, simply create new ones that are near impossible to counter in kind.

So what is to be done? Nations under constant pressure by the PRC must look for non-kinetic, asymmetric means to counter China’s growing ability to change the status-quo. Recently  I offered a multi-part plan that Washington could utilize to put Beijing on the defensive in the South China Sea. One part of that strategy, what I have named “shamefare,” could also be used by claimant states, especially by Vietnam, to fully expose China’s methods of near constant coercion. The goal is simple: put China on the defensive and shame the PRC in the media — especially social media — time and time again. It might not be as sexy as building islands, but it does stand the chance, when combined with other methods, to make Beijing pay a heavy and near constant price for its actions, with the hope that they would reconsider them.

Nations such as Vietnam, the Philippines and others have very few diplomatic, economic or even military tools at their disposal to ever fully deter China from their aggressive actions in the South China Sea. And with Beijing now reclaiming small land features and turning them into full islands with impressive military assets, within the next few years if nothing changes, China will dominate the South China Sea.

Indeed, the only way for such nations to respond is to look to other domains to pressure Beijing — asymmetric tactics that will not sow the seeds of conflict — but make China pay a price for its actions. Vietnam and other South China Sea claimants should begin the process of taping and distributing via social media any and all possible aggressive interactions with Chinese vessels — this includes fishing vessels, coast guard, naval vessels etc. — in an effort to demonstrate Beijing’s aggressive intent to the international community. Additionally, nations that have outposts in the South China Sea that could come under increasing Chinese harassment, such as Second Thomas Shoal, should also have smaller vessels equipped and ready with cameras ready to record in case Beijing attempts to apply coercive tactics to remove them — either through blockade or something more.

Small, off-the-shelf technology such as low-cost drones and UAVs could be utilized to patrol and document China’s massive changes to rocks and reefs in the South China Sea — and the environmental damage being left in their wake — as another method to demonstrate the cost of China’s coercive strategy.

Imagine the news cycle and social media being littered with incident after incident of aggressive Chinese actions in the South China Sea — of case after case being filmed and documented for the world to see. The financial costs would be small and the payoff in terms of media exposure — exposing Chinese actions — could be tremendous.

What will Beijing Do?:

So how would Beijing respond? China does have a simple way to respond — to just ignore such a move and continue on with its island building and militarization of the area. In fact, that is a very possible scenario. However, causing one to “lose face” in many Asian societies is not something to be taken lightly. China could react even more aggressively, but again, if such actions occurred on the high seas or anywhere near a camera, they could be documented and transmitted around the globe with relative ease. Beijing would be forced with some very tough choices to make — none of which would be promising.

We do know one thing: shaming can work to catch Beijing’s attention and get them to consider alternative courses of action. When the Philippines used “lawfare,” which has a very clear shaming component, and sued China in international courts over Scarborough Shoal and the nine-dash-line,Beijing reportedly offered to Manila ‘incentives’ to halt its court case — something China denies. Indeed, if Vietnam and other nations were to keep shaming China, through a shamefare strategy as noted above as well as filing separate or a collective lawsuits in international courts, ample pressure would be placed upon Beijing in the much wider court of global public opinion. And that would be something China could not so easily dismiss.

Harry Kazianis (@grecianformula) is a Senior Fellow for Defense Policy at the Center for the National Interest. He is the former Executive Editor of the National Interest and former Editor-In-Chief of The Diplomat. Kazianis is the co-author and Editor of the report: Tackling Asia’s Greatest Challenges: A U.S.-Japan-Vietnam Trilateral Report. He is also the author of the new monograph: The Tao of A2/AD. The views expressed are his own.