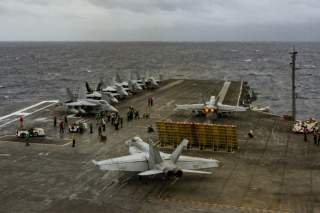 China’s national pride as well as its ambitions to exert control over the South China Sea were dealt a heavy blow by the July 12 decision of the Permanent Court of Arbitration in The Hague in the case filed by the Philippines. As expected, Beijing firmly rejected the ruling, declaring the award null and void with no legally binding force. In a string of official statements, including a new White Paper, China reiterated its positions and warned that it would decisively respond to any provocations against Chinese interests in the South China Sea. In a sharp rebuke to Foreign Minister Julie Bishop’s call for China to abide by the verdict and her assertion that Australia would continue freedom of navigation exercises, China’s foreign ministry spokesman cautioned Australia against treating international law as a 'game' and threatened that unwelcome actions by Canberra could result in a setback in bilateral relations

Beijing’s policy response to the ruling is not yet clear, however. After venting its anger and shoring up the legitimacy of the Communist Party by pledging to the Chinese people that the CCP will protect and defend the country’s sovereignty and territorial integrity, Xi Jinping will likely review his country’s approach to the South China Sea disputes. The result will be either a decision to double down on its assertive and coercive actions, or to revise its South China Sea strategy in favor of a more accommodating approach.

If Xi opts to double down and forge ahead with Chinese efforts to control the sea and air space in the South China Sea, tensions will increase along with the attendant risk of military conflict.

China could land fighter jets on its three new airstrips in the Spratlys and further militarize the artificial islands it has built by dredging sand from the bottom of the ocean. In contravention of the ruling and the UN Convention on the Law of the Sea (UNCLOS), China could draw straight baselines around the Spratlys as an island grouping and declare internal waters, territorial sea, exclusive economic zone and continental shelf. An Air Defense Identification Zone could be established mirroring vast China’s nine-dash line claim. In what would be an especially provocative move, Beijing could proceed with an apparent plan to dredge and build another military outpost on Scarborough Shoal, only 123 miles from the Philippine island of Luzon. In addition, the Chinese could continue their unlawful behavior of interfering (through use of Coast Guard vessels, imposition of fishing regulations, etc) with foreign fishing boats and exploitation of energy in portions of the South China Sea where China claims 'historic rights.'

Alternatively, Xi Jinping could decide to gradually adjust China’s policy, comply with parts of the ruling, and seek accommodation with the neighborhood.

For example, China could negotiate an agreement with the Philippines that allows fishermen from both countries to fish within the territorial waters of Scarborough Shoal. This would be a true win-win: Beijing could highlight the agreement as vindicating its long-standing preference for bilateral diplomacy and Philippine fishermen could return to securing their livelihood in the waters from which they have been excluded for more than four years. China could signal that it will not prevent Manila from exploiting oil and gas fields at Reed Bank. Beijing could stop declaring annual no-fishing zones in the Paracels and refrain from harassing Vietnamese fishermen. Future activities on Chinese-built islands in the Spratlys could be strictly limited to provision of public goods, the absolute minimum necessary for self-defense. China could refrain from dredging new islands. Cooperation between China and ASEAN could advance with an agreement on applying the protocols and procedures under the Code of Unplanned Encounters at Sea (CUES) to regional coast guards and the conclusion of a legally binding Code of Conduct.

An escalatory response by China is more likely if Beijing feels cornered by the US and its allies. For this reason, it is essential that the Philippines be humble in victory and that other countries resist the temptation to shame and isolate China. It is unnecessary (and incorrect) to humiliate Xi Jinping by declaring that China’s nine-dash line is invalid. The ruling has left open the possibility that the nine-dash line can endure as a representation of China’s claim to sovereignty over land features and maritime entitlements permitted under UNCLOS.

What the US and Australia Should Do:

Washington and Canberra should strongly support dialogue between Beijing and Manila to work out their differences. We should also encourage other countries to exercise self-restraint and ensure that their law enforcement vessels and fishing boats abide strictly by UNCLOS to deny China any pretext for future violations.

Freedom of navigation operations (FONOPS) in the South China Sea should continue, but their timing and conduct should be carefully considered. Moreover, such missions should be carried out quietly, without fanfare. If the details of a US FONOP are leaked to the media, the Pentagon should simply state that the operation was a routine enforcement of freedom of navigation and overflight, and was not intended to challenge Chinese sovereignty. If Chinese rhetoric and actions over time indicate that Beijing is not making 'excessive claims' to maritime jurisdiction that are inconsistent with 'high seas freedoms' under UNCLOS, such FONOPS may no longer be necessary.

The next US administration should make it a priority to seek Senate ratification of UNCLOS. Centering US policy toward the South China Sea on a rules-based order has proved correct. The contradiction, if not hypocrisy, of the US insistence that China abide by the Convention while the US refuses to accede to it is evident, and undermines US moral authority. If the principles and practices embodied in UNCLOS are critical to American interests, then the US should ratify the Treaty.

Now that the ruling has been issued, the South China Sea disputes will enter a new phase that contains both challenges and opportunities. Fortunately, the upcoming ASEAN Regional Forum meetings and the G20 Summit in September, which Xi Jinping is hosting and wants to be a resounding success, provides a respite. The US, Australia, and other like-minded countries should actively seek to use the next few months to help facilitate a shift in Chinese policy toward the South China Sea that is based on accommodation with its neighbors and conformity with international law.