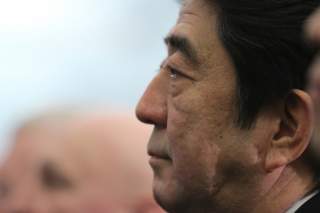 Japanese Prime Minister Abe Shinzo and his Liberal Democratic Party (LDP) have their election victory. As forecast, they crushed the opposition in Sunday's vote and consolidated their hold on the Diet. It was not a pretty sight, however; this was a problematic win, one that bodes ill for Japan if the results are interpreted as a vote for the status quo.

At first glance, the vote went as anticipated. The LDP and its coalition partner New Komei won 326 seats, increasing their representation in the Diet by one seat from the Parliament that was just dissolved. That well exceeds the 317-seat threshold required for a two-thirds "super-majority" that gives the government control of all committee chairs, a majority in every legislative committee, and allows the Lower House to override Upper House vetoes of legislation.

Dig a little deeper, however and the celebrations should quickly be muted.

While the ruling coalition gained a seat, the LDP lost four seats, dropping from 295 to 291. Ouch.

Turnout was a record postwar low of 53.3 percent, 6 percentage points below the 2012 general election. Ugly.

According to one analysis, the LDP won 75 percent of the seats in single-member districts that account for 295 Lower House seats with just 48 percent of the vote. This highlights a crucial point that analyst Michael Cucek has been hammering since the 2012 general election: the LDP claims a growing number of seats with an ever shrinking number of votes. On Sunday, the LDP won 223 district races—nearly four times the number of seats it won in 2009—with 1.8 million fewer votes than it received in 2009. Ugly. (Proportional representation (PR) votes are another issue, and they are taken up below.)

One of the big winners in the election was the Japan Communist Party, which increased its parliamentary representation from 8 seats to 21. A vote for the communist party in Japan is the ultimate protest vote. Ugly.

Two LDP members forced to resign from the Cabinet because of scandals were re-elected. Kaieda Banri, leader of the opposition Democratic Party of Japan (DPJ), lost his re-election bid, the first time since 1949 that a party head failed to win his seat. Ugly.

Finally, there is the rationale for the election itself.  "Snap" elections are held when a government loses its majority in Parliament and turns to voters to stay in power. This time, however, the government had not lost its majority and there was no risk of doing so. The government's real problem was plummeting popularity ratings, which had fallen from a stratospheric 76 percent in March 2013 to 44 percent when the election was called. In the days before the ballot, NHK reported just 23 percent of respondents were "very interested" in the election and most polls showed "undecided" or "don't know" battling or besting the LDP when voters were asked which party they would back. Ugly.

The prime minister hoped to exploit a disorganized opposition - and succeeded. The DPJ failed to run candidates in 110 of the 295 single-member constituencies. The election was a reminder to voters that they had no alternative to the LDP, which while gratifying to Abe et al, smacks of opportunism. The government's difficulties reflected the failure of its policies - for no reason other than their inability to deal with problems - yet the prime minister called an election to get a mandate to press ahead with more of the same. There is a whiff of contempt in the air.

Abe and his party have a new lease on life. Having called the election less than halfway through the Diet's term, the new Parliament will run until 2018. What will Abe and the LDP do in that time?

Abe has pledged to step up his "Abenomics" program to ensure that its benefits trickle down to the many Japanese who have yet to enjoy them. That will be difficult. He has already suspended the second phase of the consumption tax increase that pushed the economy into recession (two consecutive quarters of economic contraction). A new budget laden with stimulus measures is reportedly already in the works.

It will take more than stimulus to repeat the early success of Abenomics, which was responsible for Abe's early stratospheric approval ratings. The Bank of Japan has already committed to quantitative easing without end to stimulate inflation and it will be difficult (and dangerous) for the yen to devalue further against the dollar.

All that is left is movement on the third arrow, structural reform, and thus far the Abe government's rhetoric outpaces reality. Abe could use his election win to outmaneuver opposition within his own party - the real opposition - to structural reform but it isn't clear whether the prime minister truly believes in the liberalization that is required to unleash Japan's economic potential. In pre-election interviews, he said that he was the leader best positioned to deliver on the Trans-Pacific Partnership (TPP) trade deal, but his actions suggest little enthusiasm for the political consequences of bold steps.

Many worry that Abe will use his new "mandate" to pursue his real interests, the revision of Japan's constitution and the adoption of a higher regional and international security profile. That is possible but gains by the pacifist-minded Komei party - recall it increased seats in the Diet, while the LDP lost four - will give it yet more power within the ruling coalition. If Komei stymied attempts by Abe and like-minded colleagues to promote a more robust national security agenda in the first two years of his term, that resistance will now increase.

And the LDP needs Komei. The party doesn't have a two-thirds majority on its own, and as vote counter Michael Cucek noted, Komei provided over 6.5 million of the 7.8 million vote difference in the LDP's single member district vote and its PR vote, about one-quarter of all votes received by LDP candidates in districts. In addition, Sunday's vote witnessed the evisceration of other parties on the conservative end of the political spectrum. A year ago there was talk of an LDP-led coalition without Komei; no more. And while the DPJ underperformed in the ballot, it still gained 11 seats and with a new leadership (and new ideas) could position itself for a real run in the next election. If the opposition gets its act together, then the LDP cannot afford to disregard Komei's preferences.

Abe and the LDP have their election victory. Ironically, it is also proof that an overwhelming win isn't always a mandate and that a vote for an incumbent government can also be a call for change. The trend lines in Japanese politics are not good, and a complacent or arrogant government, one that would rule instead of governing, would make matters worse.