A Ship Is Not a Strategy 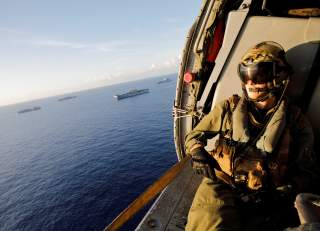 Many have advocated for legislating a minimum 355-ship US Navy to help grown sea power and support a naval force strained by years of global operations and budget austerity.  However, such a measure would reduce Department of Defense flexibility in managing forces and developing options to achieve national security goals.  Legislating minimum ship numbers confuses resources with strategy; an established national strategy should inform fleet size, not the other way around.

The US military describes strategy as “the art and science of determining a future state/condition (ends) . . . determining the operational approach (ways), and identifying the authorities and resources (time, forces, equipment, money, etc.) (means) necessary to reach the intended end state.”[i]  In short, sound strategy is based on the tenant that strategic ends should determine resource requirements.  Mandating a specific size Navy upends this principle, committing resources over long term goals and the impending release of a new US national security strategy and plan for how the US will achieve it.

With the push for a legislated mandate to maintain a 355-ship fleet, the Navy would be placed on an almost irreversible path of ship building and manning that future strategy and budget may not find necessary or supportable.  Without fixing sequestration, which has already forced tough decisions and prioritization within the US military[ii] and with US forces,[iii] it is unlikely that such mandated minimums would meaningfully address the readiness and safety concerns being struggling with now, even if the Navy itself could determine fleet composition.  The Navy would likely have funding for neither initial nor lifetime costs of such growth: construction, manning, training, maintenance, and operating expenses.[iv]

The Chief of Naval Operations has acknowledged that the Navy is doing too much with too little[v] but the answer is not to simply add more ships.  The solution likely lies with a combination of more modest ship construction, innovation, and greater cooperation - within the Department of Defense, with other US agencies, and with US allies.  Mandating a 355-ship minimum would also undeniably affect other military services, which also compete for funding and prioritization in the finite US defense budget.  Legislating substantial resource minimums will tie up a significant part of the defense budget and will handcuff the Department of Defense and each service, effectively hampering development of military options to achieve strategic goals and the ability to agilely counter emerging security concerns.

With the imminent release of a new US national security strategy,[vi] it would be prudent to consider this new strategy before determining or mandating the resources to achieve it.  If strategy sets the desired future (ends), and the military provides options to achieve it (ways), then the resources (means) must be developed to support the chosen path.  A ship is not a strategy and mandating a minimum 355-ship Navy is not the answer.

Matthew Krull serves as a fellow at the Atlantic Council and is a Surface Warfare Officer in the US Navy. The views and opinions expressed are the author’s alone and do not represent the official position of the Atlantic Council, US Navy, US Department of Defense, or US Government.

Image: Naval air crewman Aaron Glaspell looks out on a flotilla of Navy vessels as they maneuver around Hurricane Maria before eventually returning to assist the U.S. Virgin Islands, in the Caribbean Sea, September 19, 2017. REUTERS/Jonathan Drake