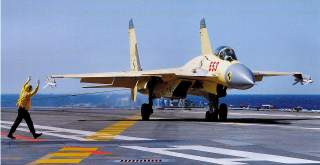 Contain yourselves, folks. Putting out to sea without mishap is a rather basic function for navies—not the apex of naval achievement. Grand geopolitical ambitions for China’s navy are likely to go unfulfilled for quite some time.

Prompting this outburst: the editorial staff at the Global Times is crowing about the latest voyage of the aircraft carrier Liaoning. Last week China’s lone flattop transited  through the Ryukyu island chain into the Western Pacific, cruised past Taiwan, and entered the South China Sea. The Japanese Defense Ministry confirmed that this represented the ship’s first egress into the open ocean. Taiwanese spokesmen fretted publicly.

The Times’s Christmas Day victory lap is premature. Sailors hone their craft not by sitting pierside but by plying the briny main—a lot. While China’s navy goes to sea more now than in bygone years, its operational practices still can’t compare to the U.S. Navy’s. Even Asian rivals like the Japan Maritime Self-Defense Force upstage China in the human dimension of seamanship and combat.

Moreover, bear in mind what Liaoning and her indigenously built sisters are likely to be: rather humble aircraft carriers, with air wings dwarfed by those sported on board American flattops. Chinese carriers can project influence and hard military power within reach of shore-based fire support, manifest in anti-ship missiles, tactical aircraft, and small surface and subsurface craft. But carrier formations will have to leave that protective umbrella behind to voyage to remote expanses—and will revert to being the humble vessels they are. They may disappoint.

Still, the idea is sound by and large. The Global Times writers have either done their homework on strategic theory or, perchance, alighted on a winning formula for sea power on their own.

First, a navy enjoying robust logistics can cause problems for a stronger antagonist at many places on the map—siphoning off forces from critical theaters or, at a minimum, compelling that antagonist to accept more risk to its interests. The editorialists opine that the People’s Liberation Army Navy must amass the wherewithal and experience to appear in distant waters—especially waters important to the United States. “If the fleet is able to enter areas where the U.S. has core interests,” they say, “the situation when the U.S. unilaterally imposes pressure on China will change.”

That insight is solidly grounded. Sea-power pundit Julian S. Corbett observes that one competitor can allocate a “contingent” of seagoing forces to make trouble for another. Lord Wellington’s modest expeditionary army inflicted an “ulcer” on Napoleon in Portugal and Spain—bogging down French forces in hybrid warfare at a time when the little emperor was struggling to subdue stronger foes to France’s east. Statesmen and commanders can pose the threat of such an ulcer in peacetime. They too can harness the power of troublemaking strategies.

Second, staying power is crucial to such endeavors. The strategist Woody Allen reputedly declared that showing up constitutes 80 percent of life. Maritime forces have to do the other 20 percent as well. They have to show up and stay to make a diplomatic statement. To appear in American waters and stay, advises the Global Times, “China needs to think about setting up navy supply points in South America right now.”

Historian Alfred Thayer Mahan codified that commonsense insight a century ago, depicting international commerce, merchant and naval shipping, and forward naval outposts as the pillars on which sea power rests. China is a major trading partner of many Latin American states. It can try to parlay economic clout into seaport access—helping the PLA Navy stage a sustained presence in the Western Hemisphere.

Third, the editorialists claim that mounting such a presence will leave Washington more pliant about Beijing’s demands in the South China Sea and elsewhere in the Indo-Pacific. A kind of reciprocity will take hold whereby one competitor defers to the other in its own home region: “When China’s aircraft carrier fleet appears in offshore areas of the U.S. one day, it will trigger intense thinking about maritime rules.”

This, it appears, is the purpose impelling Chinese maritime strategy for the Global Times scribes (and potentially for their masters in the Chinese Communist Party, with which the paper is affiliated). And there’s something to that. The United States could hardly yield supremacy to the PLA Navy in, say, the Caribbean Sea or Gulf of Mexico. Washington would probably see the need to reinforce the U.S. Navy presence in southern waters—keeping some of that shiny 350-ship navy the Trump administration wants close to home rather than deploying it to faraway seas.

But Beijing shouldn’t invest too much hope in a grand bargain over “maritime rules.” Americans rightly view freedom of the sea as indivisible, and the presence of foreign warships along its shores as the price of keeping it that way. They tolerated the Soviet naval presence in American and European waters for forty years of cold war. They can—and, I hope, will—do so again as freedom of the sea comes under stress.

In short, it’s whimsy to think America will forfeit nautical freedom in the China seas to safeguard American seas. No likely PLA Navy expeditionary presence will change that.

James Holmes is Professor of Strategy at the U.S. Naval War College and a recent recipient of the Navy Meritorious Civilian Service Medal. The views voiced here are his alone.