Should Australia Back a President Trump? 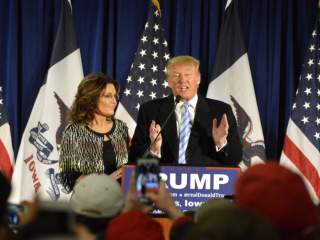 This year will see the end of the seemingly interminable process that decides who’ll become America’s next president. The conventional wisdom is that despite being the most popular candidate, Donald Trump won’t be the Republican nomination. Even if he is, Hillary Clinton will trounce him in the only poll that matters.

I’m far from being the only person hoping the pundits are right. A number of world leaders, like UK Prime Minister David Cameron, have taken the unusual step of interfering in the electoral contest to criticize Trump. Many others must be praying that America’s grumpy old white men and xenophobes don’t carry the day. But what if they do?

No one quite knows what goes on in other people’s heads in the privacy of the voting booth so we can’t be certain of the outcome. Extremism is making a comeback around the world. In some places it never entirely disappeared, of course, and that’s part of the problem. The question in Australia is whether our policymakers, particularly in defense and national security, have actually thought about the unthinkable—the ascendancy of President Trump.

Given that our national security is ostensibly guaranteed by the United States, the possible advent of a Trump presidency is especially consequential for Australians. If anyone doubts just how much of a difference an individual president can actually make, we need only recall the disastrous administration of George W. Bush.

Not only did the Bush era fundamentally undermine the America’s own security position, in both its conventional military and—equally importantly—economic forms, but it also led to a number of its allies embarking on monumentally misguided and, in Australia’s case, unnecessary military adventures.

The point to emphasize is that any country that relies too heavily on another for its security is potentially hostage to its protector’s policies—no matter how ill-conceived, dangerous or inappropriate they may be. That possibility was realized in entirely predictable and disastrous fashion when Bush was president. A Trump administration threatens to be even more catastrophic on a number of levels.

We may hope that much of Trump’s rhetoric is bluster and simply playing to the prejudices of his core supporters. But threatening to use America’s still formidable and decisive military might to ‘solve’ problems in the Middle East has the potential to make the conflicts in Iraq look like a relatively minor precursor to the main event.

Given Australian policymakers’ track record of always supporting the United States in whatever conflict it may find itself involved, no matter how remote geographically or distant from vital Australian interests it may have been, one wonders if a similar blank cheque will be offered to a potential Trump regime. If a Trump administration threatened to use the ANZUS alliance and its supposedly vital security benefits as a bargaining chip, would any Australian government feel compelled to support the United States no matter what the policy was or its possible consequences?

Given that Trump thinks that standing up to China economically and militarily is vital for America’s national interests, any administration he led might hasten the proverbial nightmare scenario in which Australia is forced to make a painful choice between its principal strategic and economic partners.

Such a dilemma might have been avoided altogether, of course, if Australia had a more independent, nonaligned foreign policy in the first place. Supporters of the alliance, who bang on endlessly about the supposed cost saving and intelligence advantages it provides, conveniently overlook the amount of treasure and—more significantly—blood that’s actually been expended in its maintenance.

Equally significant, the idea that Australia enjoys the proverbial ‘special relationship’ with the United States, in which its wise counsel is actively sought and taken into account in the formulation of American foreign policies, would be put to a searching examination in any Trump administration. It’s difficult to imagine Trump listening to advice from within the United States, let alone some peripheral vassal state.

Hopefully, it won’t come to this. Surely our American cousins aren’t that misguided and irresponsible, are they? Probably not. But, at a time when the stability and effectiveness of America’s democracy is increasing called into question and even held up to ridicule, the possibility of a Trump presidency can’t be entirely discounted. If it does happen, the policy implications for friend and foe alike will be profound. We must hope such a possibility is at least being considered in Canberra, even if history suggests that the outcome of such conjectures is all too predictable.

Mark Beeson is professor of International Politics at the University of Western Australia. This article first appeared in the Strategist.