Should Duterte Step Back on the South China Sea? 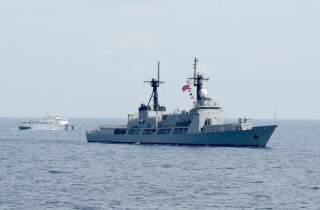 Some countries have become wary of China’s aspiration to become a maritime power because the means pursued by the Xi Jinping government — as seen in the disputed South China Sea — appear to ignore the legitimate interests of its smaller neighbors, flout existing international norms and pose risks to regional peace and stability.

China’s de facto control of Scarborough Shoal since 2012 and the construction of several submerged reefs into significant civilian–military facilities, along with its intensified presence and activity in the farthest reaches of its claimed nine-dash line, have in effect already changed the status quo.

Among those who have pushed back the hardest, mainly through diplomatic and legal means, is the Aquino government in the Philippines. As President Benigno Aquino bows out to give way to President-elect Rodrigo Duterte on 1 July 2016, the region will be watching to see whether Manila will stay the course in its approach to maritime disputes with China.

The Aquino course consists of resorting to arbitration and other platforms afforded by international law to defend its own maritime rights. The Aquino administration relied on the support of the United States and other friendly countries to beef up its maritime security capabilities. And it resisted Beijing’s offers of direct bilateral talks and proposals for joint resource development in the disputed areas.

Much, of course, depends on how China itself behaves in the coming months. The announcement of a ruling by the Permanent Court of Arbitration panel — which is expected not to favor China’s expansive claims — will be a watershed and a test of China’s intentions. China itself will then be faced with the choice of whether to stay its course or to sail in a different direction.

If China were to proceed with unilateral assertions of sovereignty — which could lead to militarization of the sea, challenges to the rights of the Philippines and other coastal states within their claimed exclusive economic zone as well as splits within ASEAN — this could cause regional instability and discredit the idea of international law. But if Beijing steps back from displays of force and shows that it is committed to international legal principles after all, then the post-Aquino government — and governments across the region — will have incentives to cooperate.

The next Philippine government must carefully craft a policy with both of these scenarios in mind. This means that the Philippines must be ready to work with China— preferably alongside ASEAN, the United States, and middle powers — to positively reinforce good behavior. At the same time, it must continue to strengthen its capacity to wage principled pushback against any coercive diplomatic strategies from China. To do either one effectively, Manila must engage China directly — and despite the misgivings of many in the Philippines, bilaterally.

The United States’ status as a world power depends much on sustaining the credibility of its alliances in East Asia. Barring a major turn to isolationism following its November elections, the United States will try to further invigorate alliances to bolster its eroding influence in the region. China’s potential to compete with the United States for regional leadership may have increased, but what kind of leader China can ultimately become is still unknown.

A post-Aquino government is thus likely to continue to work with the United States bilaterally. Under the current conditions, a new Philippine president that turns his back on the Enhanced Defense Cooperation Agreement (EDCA) with the United States risks hurting the credibility of the nation’s diplomacy as well as undermining capability-building efforts and regional stability. However, the new government should increasingly engage other partners to contribute to a regional order that privileges peaceful dispute settlement, multilateral cooperation and inclusiveness, while avoiding security dilemmas that aggravate the threat perceptions of countries big and small.

Learning from past mistakes in dealing with the United States, one challenge will be how to ensure that EDCA stays within the bounds of the Philippines’ own exercise of sovereignty and territorial integrity — two fundamental interests that are as valid whether in relation to Washington or Beijing. This means ensuring that the Philippines will remain able to set the parameters of the agreement based solely on the convergence of interests.

Given this complex external environment, this is no time for idiosyncratic behavior by any new Philippine administration. Rather, it is time for strategic foresight, objectivity, forbearance and preparedness. Having taken a big power to court to defend its rights, the Philippines, either by accident or design, has challenged not just China but the world to stand on the side of peace and the rule of law.

Aileen San Pablo-Baviera is a Professor at the Asian Center, University of the Philippines and editor of the journal Asian Politics & Policy.