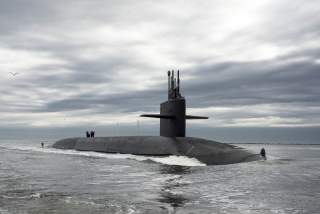 Given North Korea’s continued development of a submarine launched ballistic missile (SLBM), South Korea may be closer than ever to securing the technical support it would require from the United States to develop its own nuclear-powered submarines (SSNs). Indeed, South Korean President Moon Jae-in and U.S. President Donald Trump may have discussed South Korea’s longstanding ambitions to develop SSNs during Trump’s trip to the UN last week.

One benefit of South Korean SSNs would be to strengthen the allies’ ability to carry out the “4D” operational concept. This concept emphasizes the need to “detect, disrupt, defend against, and destroy” North Korean nuclear missiles. The so-called “Kill Chain” system, a set of sensors and deep strike capabilities that would allow the allies to preemptively eliminate a North Korean missile prior to launch, forms a key part of the 4D concept. North Korea’s progress toward a SLBM, however, has cast doubt on the sufficiency of the current Kill Chain system. Unless the allies enhance their joint anti-submarine warfare (ASW) capabilities, a North Korean missile sub could render 4D far more challenging.

This is where South Korean SSNs could play a decisive role. While SSNs are noisier and bulkier than South Korea’s Son Won-Il- and Chang Bogo-class diesel electric submarines (SSKs), they offer the advantage of heightened endurance, stronger power output, more capable sensors and faster underwater speeds. As the U.S. Navy has highlighted, SSNs can also deploy and recharge battery-powered unmanned underwater vehicles (UUVs) for reconnaissance purposes.

SSNs could therefore bolster both the “detect” and “destroy” functions of the 4D operational concept. They could supplement seabed sensors, P-3 Orion aircraft, and other allied ASW capabilities by acting as stealthy, forward-deployed sentries in North Korean littorals. In this capacity, they could monitor North Korean ports and trail missile subs with the help of UUVs and advanced sensors, without the need to reveal their positions to recharge their batteries like SSKs. And, if need be, SSNs’ superior speed and armaments could be utilized to preventively eliminate North Korean missile subs, providing the basis an “underwater Kill Chain.”

But why not simply have the United States regularly deploy its SSNs to the East and West Seas to fulfill this task? Unfortunately, the U.S. SSN fleet has struggled to keep pace with mounting challenges around the world including a more assertive China and resurgent Russia. The additional burden of providing an underwater Kill Chain would only further strain the U.S. fleet. As such, if the South Koreans can field a small SSN fleet capable of addressing the 4D requirements in the Korean littorals, it would serve to augment rather than simply duplicate U.S. capabilities.

A South Korean SSN could also strengthen the allies’ efforts ability to engage in coercive bargaining with North Korea. By improving the allies’ ability to carry out the 4D operational concept, South Korean SSNs should enhance “deterrence by denial” against North Korean nuclear threats. In doing so, SSNs would not only reduce the chances that the North would seek to use its SLBM capabilities, they also could curtail the risk that the North will be emboldened by SLBMs. In other words, if allied 4D capabilities are robust and effective, the North is less likely to believe that it's SLBMs will allow it to carry out more aggressive provocations against the allies without fear of retaliation.

The transfer of technology by the United States and costly investment of resources by South Korea could function as a costly signal of allied resolve. By bearing the additional costs of upgrading this capability, both allies would further highlight their determination to resist North Korean revisionism and reduce the risk of deterrence failure.

A U.S.-supported effort by South Korea to develop SSNs could also have beneficial consequences for alliance cohesion. One of the recurring sources of tension in the alliance is South Korea’s fear of abandonment. These concerns will become all the more acute as the North moves toward the ability to strike the mainland United States (many in South Korea worry that the United States would not defend Seoul if it involves the risk of a North Korean nuclear strike on a major American city). U.S. assistance with naval nuclear propulsion, however, would serve as a highly visible and costly signal of American commitment to its ally’s defense, bolstering South Korea’s confidence in the alliance’s dependability.

This program could also improve allied relations by allowing South Korea to assume a greater responsibility for its defense. Burden-sharing is a perennial bone of contention between the two allies, with Washington frequently calling on Seoul to contribute greater resources—both in terms of finances and manpower—to peninsular and regional security. President Trump has repeatedly argued that the South can and should do more to provide for its own defense. A small fleet of SSNs would greatly improve South Korea’s ability to do this. Rather than depending on U.S. SSNs to shoulder the burden of addressing North Korean SLBM threats, South Korea could carry the load with its own forces.

A secondary strategic benefit of South Korean SSNs would be their potential to extend the reach of the U.S.-South Korea alliance—both regionally and globally. Recent allied cooperation has emphasized broadening the scope of the allies’ security cooperation, forging a “global partnership.” Nevertheless, South Korea’s maritime power projection capabilities have remained limited. The South plans to remedy this by developing several rapid response fleets, each focused around a Dokdo-class amphibious assault ship. Currently, however, South Korea would need to rely on slower, shorter-range SSKs to escort these rapid response fleets. South Korean SSNs could provide superior escorts, allowing the fleets to move farther and faster from their homeports.

This expanded capability would enable the U.S.-South Korea alliance to contribute more actively to regional and global security beyond the Korean Peninsula. This would build upon what Adm. Mike Mullen once called the “1,000 ship navy”—a global force of likeminded navies each contributing to the security and stability of the maritime domain. In particular, Korean rapid-response fleets could assist with the Proliferation Security Initiative, sea lane protection efforts, counterpiracy and humanitarian operations abroad.

South Korean SSNs would also carry significant strategic risks, however. South Korea’s neighbors—Japan and China—may be alarmed by the South’s development of this new, advanced capability. This could contribute to deteriorating relations or even an arms buildup triggered by misperceptions about South Korean intentions.

China in particular has reacted negatively to new advances in allied 4D capabilities in the past. In response to allied deployment of a terminal high-altitude area defense (THAAD) battery, China curtailed tourism to South Korea, suspended high-level security dialogues, and deployed its own long-range radar system to Inner Mongolia.

Japan may be somewhat less concerned about this new capability given its shared interest in coping with the North Korean missile threat and increased trilateral coordination with both the United States and South Korea. Nonetheless, if South Korea were to utilize its SSNs in the Korean-Japanese dispute over the Dokdo (Takeshima) Islands in the East Sea, Japan’s calculus might shift.

Indeed, regional advances in undersea capabilities may have already contributed to a fledgling arms race throughout Southeast Asia. China’s modernization and expansion of its submarine fleet in the 1990s has triggered other states to upgrade or expand their undersea assets. Singapore’s Ministry of Defense forecasts that by 2025, the number of regional submarines will have risen from 200 to 250. The allies will need to work to offset the possibility that South Korean SSNs could escalate this ongoing competition should they choose to pursue this project.

Just as problematically, South Korean SSNs could create serious proliferation concerns if mismanaged. Naval nuclear reactors require enriched uranium to operate and the resulting spent fuel must be stored or reprocessed. A such, nuclear propulsion technology can strengthen states’ mastery of the nuclear fuel cycle and can pave the way for a latent nuclear capability. Problematically, many naval reactors rely on highly enriched uranium (HEU) that contains around 90 percent Uranium-235 which could be utilized for nuclear weapons. Indeed, Iran has used a SSN program as an excuse to justify its production of HEU in the past.

If South Korea is seen by its neighbors and the world more broadly as utilizing a SSN as a stepping stone to a nuke, it could have dangerous ramifications for the stability of the region and the legitimacy of the global nonproliferation regime. It would also seriously set back efforts to convince North Korea to abandon its nuclear program, and increase the chances that other regional powers might move to bolster their own latent nuclear capabilities. The allies will need to think carefully about how to mitigate these concerns should they pursue a South Korean SSN.