Showdown in the South China Sea: Why China or America Won't Backdown 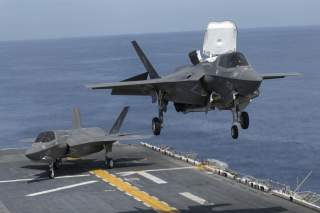 The South China Sea is once again rapidly becoming a major point of contention between Washington and Beijing, with both sides refusing to back down.

Asserting that the American vessels entered China’s territorial waters “without the permission of the Chinese government,” the Chinese Ministry of National Defense explained that the Chinese military “immediately dispatched warships to identify and inspect the American ships according to law, and warned them to depart.” This claim has not been verified.

Nonetheless, China clearly intends to pursue a more confrontational approach. “The Chinese army is determined to strengthen the preparations for sea and air combat readiness, raise the level of defense, defend national sovereignty and security,” a defense ministry spokesman revealed.

In recent months, China has dramatically bolstered its military presence in the South China Sea.

China dispatched heavy bombers to contested territories in the region in mid-May. “A division of the People’s Liberation Army Air Force (PLAAF) recently organized multiple bombers, such as the H-6K, to conduct take-off and landing training on islands and reefs in the South China Sea in order to improve our ability to ‘reach all territory, conduct strikes at any time and strike in all directions,'” China’s air force said in an official statement.

The statement described the exercises, believed to have been carried out around Woody Island in the Paracels, as preparation for “the West Pacific and the battle for the South China Sea.”

China has also deployed YJ-12B anti-ship cruise missiles and HQ-9B surface-to-air missiles to islands in the Spratlys, boosting China’s ability to combat U.S. aviation and naval assets should such action be necessary. Such weapons systems also serve as a warning to other claimant states.

China always asserts that its actions are defensive in nature, arguing that the deployment of various weapons systems do not constitute “militarization” and are, therefore, not a violation of past agreements. “Those who do not intend to be aggressive have no need to be worried,” Chinese Ministry of Foreign Affairs spokeswoman Hua Chunying said in response to questions about the recent missile deployments.

In response to Chinese activities, the U.S. decided to disinvite China from this year’s Rim of the Pacific (RIMPAC) exercises, the largest international maritime drills in the world. This action was described as an “initial response,” indicating that there may be more to come if China does not change its ways.

It is, however, unclear if U.S. actions can successfully reverse current trends in the South China Sea given China’s level of entrenchment. An international arbitration tribunal rejected Beijing’s claims to the South China Sea in 2016, the U.S. has been conducting FONOPS since 2015, and various international bodies have attempted to put pressure on China for its assertive behavior at sea, yet China is still moving to dominate the region.

“China is now capable of controlling the South China Sea in all scenarios short of war with the United States,” Adm. Philip Davidson, the new head of U.S. Pacific Command, said in April.