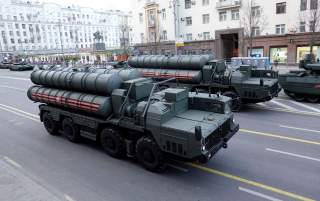 A senior U.S. official slammed Russia on Friday for allegedly threatening to use nuclear weapons.

In an interview with Japan’s Kyodo News, Rose Gottemoeller, the under secretary of state for arms control and international security, criticized Russian President Vladimir Putin for threatening to use nuclear weapons during the Ukraine crisis in February of last year.

Gottemoeller was likely referring to comments Putin made in February 2014 indicating that Moscow would have to “point its warheads” at Ukraine should the country decide to join NATO.

“It's frightening not just to talk about this, but even to think about, that in response to such deployment, the possibility of such deployments—and one can't theoretically exclude these deployments—that Russia will have to point its warheads at Ukrainian territory," Putin said at the time, according to Western media reports. In a new documentary about the Ukraine Crisis last year, Putin also says that Moscow was ready to put nuclear forces on high alert.

Gottemoeller’s comments come on the heels of another report that former Russian military officials have told their American counterparts that Moscow would consider using nuclear weapons over disputes involving Ukraine and the Baltics.

Specifically, The London Times reported that during a “high-level meeting” between former U.S. and Russia security chiefs last month, the Russian side said that Putin would consider “a spectrum of responses from nuclear to non-military” if NATO continues to build-up its forces in the Baltic states. They also said there was three flashpoints that could lead to a possible nuclear showdown between the former Cold War adversaries: Crimea, Eastern Ukraine and the Baltic States. According to the report, the former security chiefs had been briefed by Russian Foreign Minister Sergei Lavrov before the meeting.

Russia quickly dismissed The Times’ story, however, with Dmitry Peskov—Putin’s press secretary—telling Russian journalists, “This is a classic example of the continuing hysteria and the demonization of our country. They themselves are fanning the flames concerning this. However, it is not guided by any particular facts and they themselves are afraid of what they wrote.”

Nonetheless, the threat of a U.S.-Russian confrontation is clearly growing as the West and Russia continue to tangle over Ukraine and Baltic states. As Graham Allison and Dimitri Simes warned in the cover story of the latest issue of The National Interest:

While most policy makers and commentators dismiss the possibility of a U.S.-Russian war, we are more concerned about the drift of events than at any point since the end of the Cold War. We say this having followed Soviet and Russian affairs throughout the Cold War and in the years since the Soviet Union’s implosion in 1991. And we say it after one of us recently spent a week in Moscow talking candidly with individuals in and around the Putin government, including with many influential Russian officials, and the other in China listening to views from Beijing.

They further noted that “Latvia Estonia and Lithuania form the Achilles’ heel of the NATO alliance,” and that “It is not difficult to imagine scenarios [in the Baltic states] in which either U.S. or Russian action could set in motion a chain of events at the end of which American and Russian troops would be killing each other.”

(Recommended: Russia's 5 Most Lethal Weapons of War on Land)

Gottemoller made her remarks as the United Nations prepares for the 2015 Nuclear Non-Proliferation Treaty review conference, which begins on Monday in New York.