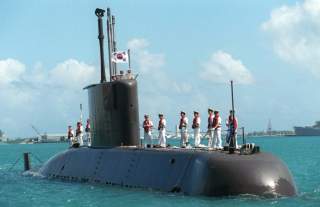 “The launch of the submarine force command is a clear display of our will to perfectly defend our East, West and South Seas through the enhanced quality and quantity of our submarine capabilities," the Republic of Korea (ROK) Navy said in a press release announcing the command. “With the command, we have secured capabilities to more proactively deter North Korean threats by effectively controlling and managing our submarine forces ― strategic weapons systems that could stealthily strike the heart of enemy forces.”

The new command will be headquartered at Jinhae Naval Base in South Gyeongsang and will have a fleet of 13 submarines with ambitious plans to expand in the coming years. South Korea is just the sixth country to have an independent submarine fleet after U.S., Japan, France, Britain and India, South Korean media outlets reported. Other local media reports said that Rear Adm. Upper Half Youn Jeong-sang, a former deputy naval operations commander, would head up the new command, which will be tasked with “maintaining deterrence against the North, conducting wartime missions to strike strategic enemy targets, and protecting sea lines of communication.”

Indeed, on Thursday of this week the South Korean military announced it is developing a new comprehensive submarine operation plan. “The comprehensive operation plan on submarine capabilities to be based upon the existing one aims to counter not only threats by North Korea but potential danger to be posed by neighboring countries," an anonymous ROK Joint Chiefs of Staff (JCS) official told Yonhap News Agency. “The military will also continue to develop precise and powerful underwater weapons to attach them to our submarines.”

The announcement of the revised operations plan coincided with Adm. Choi Yun-hee, the chairman of the JCS, visiting the new submarine command. Speaking to sailors at the command, the chairman instructed them to take a “one shot, one sink" mentality.

"As our military's key capabilities in operational and strategic terms, the submarine command needs to materialize the proactive and offensive concept of operation suitable for the combat circumstances of our time," Choi said, according to Yonhap.

Even before these concerns began to surface, South Korea had been amassing a formidable undersea fleet. As noted above, Seoul currently boasts thirteen submarines. Nine of these are 1,200-ton Chang Bogo class diesel-electric attack vessels that are the export versions of the German Type 209 class submarines. According to Naval Technology, the Chang Bogo class has a single hull and “a length of 56 m, a beam of 6.2 m and a draft of 5.5 m.” In terms of weaponry, the Chang Bogo class vessel boasts eight 533 mm tubes and 14 Surface and Underwater Target (SUT) Mod 2 torpedoes, each of which has a range of 28 km. Some of them can also fire Harpoon cruise missiles and all can hold mines instead of torpedoes. Their diesel-electric propulsion system enables them to travel at a maximum speed of 22 knots when submerged, with a range of 595 km.

Since 2007, South Korea has commissioned four 1,800-ton Son Won-Il class Type 214 submarines (and launched a fifth), which hold a number of advantages over the Type 209 vessels. For one thing, the Type 214 submarines are equipped with Air Independent Propulsion (AIP), which allows them to stay submerged for two weeks at a time. They also have a diving depth of 400 meters, although their underwater speed is reportedly only about 20 knots. Their ISUS 90 submarine combat systems allow the Type 214 vessels to engage 300 targets simultaneously.

The navy has also said it will commission five more of the Type 214 submarines by 2019. The following year it will begin work on the first of nine indigenous 3,000-ton submarines, which will be capable of launching ballistic missiles.