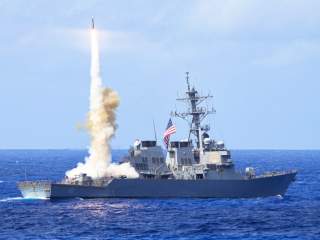 The United States Navy’s fleet of Aegis cruisers and destroyers are getting a massive boost in lethality. For years, many believed that America’s mighty surface combatants were on track to be outgunned by their Russian and Chinese counterparts—however, a newly unveiled modification to the Raytheon Standard SM-6 changes of all of that.

“I'm announcing today new capability for the SM-6. We're modifying the SM-6, so that in addition to missile defense, it can also target enemy ships at sea at very long ranges,” U.S. defense secretary Ashton Carter said at Naval Base San Diego in California on February 3.

“This is a new anti-ship mode. It makes the SM-6 basically a twofer. Can shoot down airborne threats,” Carter said. “And now you can attack and destroy a ship at long range with the very same missile.”

While the long-range SM-6 was known to have an extremely potent air and missile defense capability, this is the first time the Pentagon has acknowledged that the weapon has an anti-surface mode as well. The older, shorter-range version of the Standard—the SM-2—also had an anti-surface mode, though it is not exactly far reaching.

The physical radar horizon for a S-band radar like that of the Aegis is about 250 nautical miles for a target flying at about 30,000 feet. For target flying at lower altitudes, the radar detection range would be shorter—which is where the E-2D comes in. While the range for the SM-6 is classified, the weapons range could potentially be greater than 250 nautical miles.

Because the E-2D has the capability to track air and surface targets, the SM-6 would effectively allow U.S. warships to engage enemy surface combatants over-the-horizon with a Mach 3.5+ missile. While the SM-6’s warhead was designed to kill aircraft—and as such is relatively tiny—the fact that it also has ballistic missile defense capability suggests it has a hit-to-kill capability.

“It's a fantastic surface-to-air weapon; highly maneuverable, aerodynamically, and can stop incoming ballistic and cruise missiles that were trying to attack one of our warships,” Carter said.  “Can do it in the atmosphere, has very low altitude, acquire them, attack them, kill them.  It's one of our most modern and capable munitions.”

Given that modern warships are not the armored battlewagons from the battleship era, it is relatively easy to achieve a “mission kill” on a current-generation surface combatant. That means even with its small warhead, the SM-6 should be more than effective against, for example, a Russian Kirov-class battlecruiser due to the warhead's speed. The kinetic energy from a very fast missile can do enormous damage by itself.

“By taking the defensive speed and maneuverability that's already in our Aegis destroyers' vertical launch cells, and leveraging them for offensive surface warfare lethality, that makes it a potent new capability for you, surface warfare professionals,” Carter said. “It's also a good deal for the taxpayer, because they're getting two capabilities in one missile.”

In the space of a week, naval analysts in Washington went from decrying the lack of anti-ship capability on American warships to celebrating the fact that the U.S. Navy has ninety of the most lethal surface combatants on the planet.