Is This a Sneak Peek at the Israeli Army's New Tank? 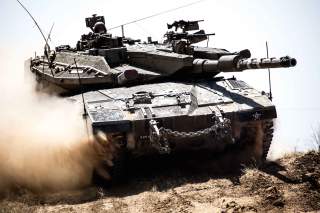 A small armored wedge with a remote-controlled turret: is this what the Israel Defense Force’s future armored vehicles will look like?

The answer is . . . maybe. At a conference in Israel last month, the former chief of the IDF’s Armored Corps showed a simulation of what Project Carmel—the IDF’s effort to develop technology for the its generation of tanks—might produce.

The virtual vehicle is wedge-shaped, with the hull sloping towards the front. The cannon-armed turret is set at the rear of the hull, with a machine gun mounted on top. In one of the screenshots, below the turret there is what seems to be—and your guess is as good as mine—a row of vision ports (you can see other screenshots here and here).

Israel is developing two next-generation armored vehicles. One is the Eitan, the IDF’s first wheeled armored personnel carrier and the chosen replacement for Israel’s fleet of old and poorly armored M113 APCs. Already in the prototype stage, the eight-wheeled Eitan somewhat resembles the U.S. Stryker. The thirty-ton Eitan will be paired with the much heavier Namer, an APC based on the chassis of the Merkava tank.

However, the simulated vehicle displayed at the conference by retired Brigadier General Didi Ben-Yoash, who is heading Project Carmel, is much more of a tank. It would be tracked rather than wheeled like the Eitan, and would weigh thirty-five to forty tons (compared to a sixty-eight-ton M-1 Abrams). With just two crewmen, the vehicle would mostly function autonomously, including “autonomous navigation and driving, target spotting, aiming, independent firing whenever possible plus other features,” according to Israel Defense magazine.

The “cockpit” of the Israeli vehicle will have space for a third crewman to operate drones and standoff weapons. The tank would also have an active protection system, such as Israel’s Trophy, to deflect antitank missiles and rockets. “The future armored platform will be light, agile, small, relatively inexpensive and simple to operate and designed primarily for operation in urban areas with the hatches closed,” Israel Defense said.

The new tank will not replace the current Merkava 4, which is expected to remain in production until 2020. “Rather, it is a research-and-development program aimed at a state-of-the-art, medium-weight combat vehicle,” according to Defense News.

“It won’t be Merkava 5,” an Israeli official told Defense News. “The operational requirement will be something entirely different.”

Much like the United States and its Ground-X Vehicle Technology project, Israel is aiming to develop smaller, lightweight tanks that can operate in urban terrain. In Israel’s case, the IDF is mindful of the lessons of Operation Cast Lead, the 2014 incursion in Gaza that saw Israeli soldiers challenged by a city with narrow streets and crisscrossed by tunnels. Also in line with U.S. thinking, the Israeli vehicle will be heavily networked into battlefield command and control systems.

The Below the Turret Ring blog offers a thoughtful analysis of what’s known about Project Carmel vehicle so far. The Israeli vehicle is considerably lighter than the forty-eight-ton Armata, which is Russia’s next-generation tank. Its active protection system might stop antitank missiles, but its armor won’t stop heavy cannon rounds from tanks such as the T-72. “The closest Russian counterpart to the Carmel might be the BMPT/BMPT-72 Terminator fire support vehicle designed by the Russian company UVZ,” the blog notes.

In that sense, Project Carmel sounds less like a main battle tank that can replace the Merkava or Abrams in a turret-to-turret armored slugfest. A small tank protected by medium armor and armed with an autocannon and missiles, it would seem to have its own niche as an infantry support vehicle.