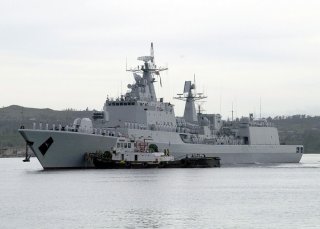 As tensions mounted in the South China Sea, a U.S. State Department telegram urged the government of Vietnam to avoid any deeper conflict with China over the Paracel Islands. There had already been casualties as a result of the dispute over which country had rightful control of the islands, and the Vietnamese government sought U.S. assistance. State Department officials contacted the U.S. ambassador to Vietnam and emphasized their interest in “cooling the situation.” They insisted that any statements to the media stress that the U.S. government took no position on the issue but held firmly to its belief that a confrontation with China over the islands was in no one’s best interests. The telegram is dated January 19, 1974.

Back then, the hostilities escalated into the Battle of the Paracel Islands, in which the Chinese navy defeated the navy of the Republic of Vietnam (a.k.a. South Vietnam) in a daylong fight. Although the U.S. had been South Vietnam’s main ally in its civil war against the Democratic Republic of Vietnam to the north, by 1974, it had removed most of its military and financial assistance and was pursuing diplomatic relations with China. Thus, the U.S. Seventh Fleet denied the South Vietnamese navy’s call for assistance in the South China Sea as it struggled against Chinese warships. The islands and the waters around them have remained contested, with Vietnam and China each pointing to different maps to make their respective claims. Forty years after the Battle of the Paracels, the threat of war is once again brewing in the South China Sea.

Since China deployed an oilrig to the contested waters off Vietnam earlier this month, my friends, colleagues, and students here in Ho Chi Minh City have asked me what the U.S. is going to do about China. Given the history of fairly contentious relations between Vietnam and China, it is easy to understand why Vietnamese citizens are nervous, and even scared, about China’s potential for regional expansion. My Vietnamese friends, however, are not finding it as easy to comprehend why the U.S. has not come to their nation’s defense forcefully. One comment I have heard a number of times, always expressed with a sense of surprise, is that the U.S. is only concerned with its own interests. When I asked one friend why she found this astonishing given that all nations act according to their interests, she replied that Americans talk about defending freedom, yet they have not acted to stop China from encroaching upon Vietnam’s freedom of the seas.

A concern for strategic interests and a commitment to freedom are not mutually exclusive. By exercising restraint regarding the South China Sea, President Obama and U.S. policymakers are trying to avoid escalating the conflict, which could become a much more serious threat to freedom in Southeast Asia, and in the Pacific region in general, if current tensions explode into war. Concerned about China’s response, Vietnam is exploring closer relations with the U.S. cautiously. Vietnam limits the number of port visits U.S. navy ships can make to the country, so even if some U.S. military officials want to send ships to Vietnam’s aid, acting outside the constraints would violate the sovereignty Vietnam desperately hopes to protect. Forty years ago, a military confrontation between the U.S. and China would not have contributed to Asia-Pacific stability, and that holds true today. America’s measured response to South China Sea tensions illustrates an effort to maintain balance in its policy “rebalance” toward the Pacific.

Heather Marie Stur, Ph.D., is a 2013-14 Fulbright Scholar in Vietnam, where she is a visiting professor on the Faculty of International Relations at the University of Social Sciences and Humanities in Ho Chi Minh City. She is an associate professor of history at the University of Southern Mississippi and a fellow in the Dale Center for the Study of War and Society. She is the author of Beyond Combat: Women and Gender in the Vietnam War Era (Cambridge 2011).