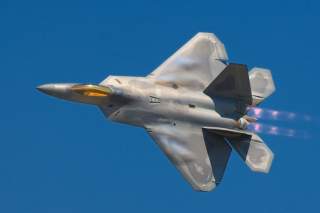 America’s F-35 clearly has its share of problems. Such challenges only compound the U.S. Air Force’s real dilemma: not having enough dedicated air superiority fighters as potential competitors like Russia and China beef up their own capabilities. The problem stems from the fact that the Air Force’s Lockheed Martin F-22 Raptor fleet was terminated after only 187 aircraft were built–less than half of the 381 jets the service needed as a bare minimum.

Speaking to reporters at the Air Force Association convention in National Harbor, Md., just outside the capital, Air Combat Command commander Gen. Hawk Carlisle said he would love to see the Raptor back in production. “I dream about it every night,” Carlisle said.

Indeed, the Raptor has proven to be a formidable warplane with its unique combination of stealth, speed, maneuverability, altitude and sensors. It’s simply the best air superiority fighter the United States has ever produced and it was a foolish, shortsighted decision to end its production run prematurely.

But while many within the Air Force would dearly love to see the Raptor back in production, it is not likely to happen. The first problem is that while Lockheed and the Air Force supposedly made every effort to carefully squirrel away the tooling and instructions for building the F-22, problems have emerged when maintenance crews have attempted to pull the equipment in order to repair damaged jets.

One recently retired Air Force official with direct knowledge about the service’s efforts to repair two damaged Raptors said that they faced severe difficulties with retrieving the correct tooling. In one example, Air Force maintainers needed to build a particular component from scratch to replace a severely damaged part for an F-22. The crews went into the Conex boxes where the tooling and instructions to build the part were allegedly stored, but to their considerable surprise and aggravation, the container was empty. The same pattern repeated itself several times—and as of the last time the source checked–the issue remains unresolved. The bottom line is that even if the Air Force wanted to, it may not be physically possible to restart the line—at least not without a huge additional investment in time and money.

The second factor to consider is that the Raptor’s avionics were dated even before the jet was declared operational in December 2005. While the Raptor is the most advanced operational warplane in the Air Force’s inventory, its computer architecture dates back to the early 1990s. The core processors run at 25MHz–since it took so long to get the jet from the design phase to production. Moreover, the Raptor’s software is particularly obtuse and difficult to upgrade–which is partly why integrating the AIM-9X and AIM-120D missiles onto the aircraft has been so problematic. The jet’s avionics would have to be completely revamped for a production restart, not just because they’re obsolete, but also because the jet’s antique processors and other components haven’t been made in decades. That would be a very expensive proposition at a time when the Air Force’s budgets are shrinking.

The third factor to consider is that the basic F-22 airframe design originates from the 1980s. The Raptor, as of this year, has been in service for a decade. The technology is old—stealth, propulsion, avionics and airframe design have come a long way since the F-22 was designed. If the Air Force were to invest several tens of billions of dollars into an aircraft, it has to ensure that those technologies are still relevant to threats decades from now. By 2035, the Raptor will have been in service for 30 years—most of its systems would be hopelessly obsolete by then.

The reality is that the Air Force likely will never restart the Raptor production line. The technology is dated and the jet may not be relevant to the threat environment past the 2030s–especially if one considers that PAK-FA and J-20 are both around the corner. The Air Force has already started laying the groundwork for a next generation air superiority capability it is calling the F-X. We don’t yet know how it will shape up, but it will surely be designed to fight the threats of tomorrow.