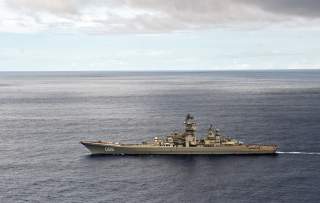 Russia has not decided if it will dispose of two of the largest nuclear-powered submarines ever built.

Previously, Moscow was thought to have made the decision to dismantle its remaining 48,000-ton Project 941 Akula-class—better known as the Typhoon-class in the West—ballistic missiles submarines (SSBN) in favor of building additional Project 955 Borei-class SSBNs. Russia has already scrapped three of the massive vessels while the lead boat Dmitriy Donskoy was upgraded to a Project 941UM configuration to test the problematic Bulava submarine-launched ballistic missile.

“The decision on the future use of Project 941 Akula nuclear submarines Arkhangelsk and Severstal are the responsibility of the Defense Ministry,” a representative of Russia’s United Shipbuilding Corporation told state-owned RIA Novosti.  “USC enterprises have all the technical possibilities prepared for the implementation of the Navy's plans for these ships.”

Though the Project 941 SSBNs were by far the largest and most capable SSBNs ever built by the Soviet Union, Russia retired the massive boats in the after the fall of communism due to the sheer expensive of operating those vessels. Moreover, the Kremlin chose not to refurbish the enormous submarines because the cost of refitting and operating a Typhoon-class boat was less than the cost of a new Borei. The Borei is also a newer and stealthier design—which means that those vessels are more survivable.

For a time in 2008, the Russians were thought to have been considering converting the Typhoons into cruise missile carriers or special operations platforms, however those plans didn’t seem to materialize. Indeed, most analysts expected that the vessels would be scrapped because the modern Russian Navy doesn’t have the money or manpower to operate the enormous submarines. If the RIA Novosti report is correct, then there is a possibility Arkhangelsk and Severstal could be returned to service at some point.

Meanwhile, it appears that the fate of the nuclear-powered Project 1144 Orlan-class (or Kirov-class) battlecruiser Admiral Lazarev—formerly known as Frunze—remains in limbo. The massive warship was taken out of service in 1999 and was expected to be scrapped as Russia’s financial situation deteriorated. “USC has no knowledge about the current plans of the Russian Navy on the cruiser Admiral Lazarev,” the USC representative told RIA Novosti. “This issue is in the purview of the Navy high command.”

Out of the four Kirov-class battlecruisers built by the Soviet Union, only Peter the Great is currently operational and serving in the Mediterranean. Admiral Nakhimov is currently being modernized while the lead-ship Admiral Ushakov—the former Kirov—is almost certainly going to be scrapped at some point. Ushakov suffered a serious reactor accident in 1990 and was never repaired.