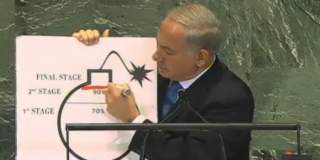 Qatari television network Al Jazeera has obtained a cache of secret intelligence cables, apparently from South Africa, and they’re eagerly promoting them as “the largest intelligence leak since Snowden.” Yet one of the first baubles plucked from this alleged treasure trove is fool’s gold—even with their attempts to represent it otherwise.

The Qatari-government-funded station argues that the cables reveal that Israeli prime minister Benjamin Netanyahu “misled” the United Nations in his famous September 2012 address to the United Nations General Assembly—that Israeli intelligence had an assessment of the Iranian nuclear program that “appears to contradict the picture painted by Netanyahu of Tehran racing towards acquisition of a nuclear bomb.” There were plenty of things wrong with that Netanyahu speech, and there’s plenty of evidence that Netanyahu and his intelligence services don’t always see eye to eye on Iran. But what the network has uncovered doesn’t contradict Netanyahu, and offers little that wasn’t already known to the public.

A cable from October 2012, apparently from the Mossad, assesses the state of Iran’s nuclear program. Al Jazeera notes that the document says that “Iran at this stage is not performing the activity necessary to produce weapons,” but “is working to close gaps in areas that appear legitimate such as enrichment, reactors, which will reduce the time required to produce weapons from the time instruction is actually given.” They contrast this with “Prime Minister Benjamin Netanyahu's 2012 warning to the UN General Assembly that Iran was 70 per cent of the way to completing its ‘plans to build a nuclear weapon’” and (in their video report) with his line that “by next spring, at most by next summer at current enrichment rates, they will have finished the medium enrichment and move on to the final stage.”

Making nuclear weapons is complicated. A working warhead is the result of several distinct lines of technical development. You need enough enriched uranium to sustain a rapid chain reaction (the core of the bomb), and you need a way to induce that chain reaction (the mechanism of the bomb). (You’ll also probably want a way to deliver the bomb, a third line of technology.) Netanyahu’s argument rested on this distinction: he said that the world must draw a red line on Iran’s activities that could be useful for making a core because those activities are much harder to hide than those for making the mechanism:

For Iran, amassing enough enriched uranium is far more difficult than producing the nuclear [detonation mechanism]....it takes many, many years to enrich uranium for a bomb. That requires thousands of centrifuges spinning in tandem in very big industrial plants. Those Iranian plants are visible and they’re still vulnerable. In contrast, Iran could produce the nuclear detonator...in a lot less time, maybe under a year, maybe only a few months. The detonator can be made in a small workshop the size of a classroom. It may be very difficult to find and target that workshop...So in fact the only way that you can credibly prevent Iran from developing a nuclear weapon, is to prevent Iran from amassing enough enriched uranium for a bomb.

Bibi was, in other words, not asserting that an Iranian nuclear device was coming soon—he was saying that Iran was approaching the end of the phase in which its nuclear program would be easiest to interrupt. The Mossad’s statement that Iran “is not performing the activity necessary to produce weapons” doesn’t contradict that, particularly when read with their line that Iran’s activities at the time would “reduce the time required to produce weapons from the time instruction is actually given.” Iran was taking steps that made weaponization easier, even if it wasn’t weaponizing. A closer reading of the speech, and a better understanding of the underlying technical issues, would have revealed the harmony between the two positions.

That closer reading also would have answered the question the presenter asks at the end of the video report: “The ‘Spy Cables’...begs [sic] the question: where did [Netanyahu] get this information?” As Netanyahu said at the time: “What I told you now is not based on secret information. It’s not based on military intelligence. It’s based on public reports by the International Atomic Energy Agency. Anybody can read them. They’re online.”

So the Qatari-backed press might not be the best source for news on Israel. But there are still two interesting points of tacit discord between Netanyahu and his spies, points which Al Jazeera does not acknowledge.

The first: Netanyahu says that “by next spring, at most by next summer at current enrichment rates, [the Iranians] will have finished the medium enrichment and move [sic] on to the final stage. From there, it’s only a few months, possibly a few weeks before they get enough enriched uranium for the first bomb.” In other words, enriching to weapons grade will follow the accumulation of enough medium-enriched uranium—Iran will take the next step as soon as it is able. The Mossad document is agnostic on that—it has Iran taking the next steps “when the instruction is actually given” by its leaders. Netanyahu’s Iran is in a mad dash to the bomb; technical obstacles are the only things slowing it down. It will only respond to the threat of force—to the declaration of a red line. Mossad’s Iran is more cautious—it’s taking steps to reduce the time it needs to build a weapon and to “preserv[e]” and “retain” its old weaponization infrastructure. But the choice to actually weaponize has not been made. There’s no mad dash and perhaps no inevitability.

The issue of Iranian caution points us to a second dissonance. Netanyahu argues that Iran is on the brink of “finish[ing] the medium enrichment” phase along the path to having enough weapons-grade uranium for a bomb. “Finishing” this phase, and being ready to move on to the next one, has two inputs: centrifuges and medium-enriched uranium. With enough of both, you can quickly get to weapons grade—and speed is essential, since taking this final step would remove many doubts about what Iran’s nuclear program is for. Yet, as the Mossad report notes, Iran’s stockpile of medium enriched uranium was not expanding at the time, “as some [of it] is being converted to nuclear fuel for [the Tehran Research Reactor].”

This was widely perceived as an attempt to reduce tensions by limiting the size of the most threatening part of its nuclear stockpile. This is not behavior we’d expect from Netanyahu’s mad-dashing Iranian fanatics. In Bibi’s defense, there was debate at the time on how meaningful conversion was—the Institute for Science and International Security, for example, would complain a year later that “although conversion of uranium hexafluoride into uranium oxide and fabrication into fuel elements does limit Iran’s ability to quickly use this material in a breakout scenario, the only iron-clad way to prevent further enrichment is for an outside country to hold this material in escrow prior to irradiation” in a reactor. But it is worth noting that the Mossad report does not seem to take such concerns seriously: it flatly states that “the amount of 20% enriched uranium is...not increasing,” citing the conversion activity.

Netanyahu’s speech was far from perfect. But his most questionable statements were about Iran’s intentions and motivations, not about the details of its nuclear program. His apparent divergences with the Mossad on that matter are largely a matter of framing, not of fact.