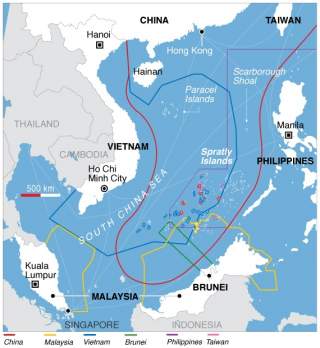 Anthony Bergin wrote recently on The Strategist that The Hague award in The Philippines v China arbitration case is a heavy defeat for Beijing. The award is breathtaking in its overwhelming support for the Philippines’s position, and comes as a surprise to many seasoned international maritime law experts. I’ll just raise two such surprises.

First, although many experts expected the Tribunal to make general statements on China’s so-called ‘nine-dash line’, few predicted a straightforward verdict declaring the line invalid when it comes to China’s historical rights to resources.

Second, although many expected the Tribunal to rule on the status of some of the maritime features in the Spratly Islands, very few believed that Itu Aba (Taiping Island), the largest naturally formed feature in the South China Sea, would be ruled as a mere ‘rock’ rather than a fully-fledged ‘island.’ An ‘island’ is entitled to a 12-nautical-mile territorial sea, a 200-nautical-mile exclusive economic zone (EEZ) and a continental shelf; a ‘rock’ only gets a territorial sea.

Of those two decisions, the ruling on the status of features is the more controversial in legal terms and also more consequential in terms of the political and diplomatic fallout. A significant part of the international opinion considers Itu Aba an ‘island,’ contrary to the Tribunal’s judgment. No wonder the new pro-independence government in Taiwan categorically rejected the award, forging a truly rare agreement between Taipei and Beijing on an issue of such great importance. The Tribunal’s rule on Itu Aba is careless and debatable to say the least.

Beijing made five immediate releases following the award: a Foreign Ministry statement about its position on the award; remarks by Foreign Minster Wang Yi on the award; remarks by People’s Republic of China (PRC) President Xi Jinping on the award; a PRC government statement about China’s territorial sovereignty and maritime rights in the South China Sea; and a State Council white paper on settling the disputes with the Philippines through negotiation: the PRC’s first white paper on the South China Sea.

Of those five documents, the last two are the most important. Crucially, both mention the ‘nine-dash line’ map only in passing. Instead, the PRC government statement announces China’s readiness to make practical temporary arrangements with the Philippines to reduce tension and seek cooperation. The white paper also reaffirms China’s intention to seek regional peace and stability.

Those documents were clearly prepared beforehand. They show that the Foreign Ministry is engineering important policy changes in this vital area. In particular, the PRC government statement makes an important step in clarifying China’s claims, stating that those include four areas: sovereignty over all the islands in the South China Sea; internal waters, territorial seas and contiguous zones of those islands; EEZs and continental shelfs of these islands; and historical rights.

Notice that the ‘nine-dash line’ doesn’t figure at all in these claims. That suggests that Beijing may have come to the realization that the line has become a historical burden rather than a strategic advantage. The quiet disappearance of the ‘nine-dash line’ from China’s official claims is a major policy change. Although it will be hard to ascertain the Chinese leadership’s latest view on the ‘nine-dash line,’ this statement is ground-breaking in implying that China doesn’t take it as a territorial demarcation line—that is, China doesn’t claim 90% of the South China Sea as ‘a Chinese lake’, as is so often alleged in international media. Such clarification, even if only deducible by implication, is probably the most important signal Beijing wants to send to the outside world following the award.

Also notice that although the claim to sovereignty and maritime rights over ‘all the islands’ appear sweeping, the claim doesn’t specify the nature or scope of those islands. The ambiguity is likely meant to leave room for future negotiation with other countries. It’s possible that Beijing may eventually bring those claims in line with the United Nations Convention on the Law of the Sea in some manner, subject to satisfactory negotiation outcomes.

These are important policy changes that Beijing has planned to announce at the conclusion of the arbitration case. Indeed, in the final months before the announcement of the award, there were already signs that the Chinese government—at least the Foreign Ministry—was looking for a way out of the arbitration case. Chinese diplomats privately complained about the costs of spending so much diplomatic energy and resources over this case. They were hoping that in the event of a more or less balanced award, Beijing could quietly ignore it while starting a new diplomatic negotiation process with the Philippines.

Unfortunately, the lopsided award has put the credibility of the Foreign Ministry’s efforts on the line, especially in the eyes of growing domestic nationalistic criticisms. The counterproductive effect of the award is to stir up Chinese nationalism while undermining moderate voices represented by professional diplomats. Whatever its failings, the Foreign Ministry is still China’s best hope for shaping a peaceful and responsible approach to the world.

The award would thus complicate China’s internal difficulties—already massive— in fashioning a reasonable South China Sea policy. I’ve earlier identified three camps inside China vying for policy influence over the South China Sea: the realists, hardliners and the moderates. From the perspective of Chinese domestic policy debates, the biggest winner of the award is the hardliners, who have long held that the case is but an American conspiracy against China. Now they may even attack the award as a new ignominious chapter in China’s ‘century of humiliation’ dating from the mid-19th century that can justify any response, including military force. The realists’ position will remain secure, although they’re likely to be pulled toward the hardliners’ direction.

The moderates are now in a precarious situation, further besieged by attacks from all sides. That hardly bodes well for China’s South China Sea policy or Asia’s troubled maritime order. The outside world—the Philippines, the United States, and ASEAN, in particular—needs to help the moderates’ cause by exercising restraint and demonstrating good will in an uncertain post-award world.