South China Sea: Beijing Is Winning, but Here's How to Retake the Initiative 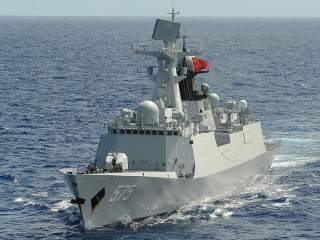 China is once again causing concern in the South China Sea, this time by moving surface-to-air missiles to the Paracel Islands.

Balancing strategies stress building greater relative power, usually militarily. A state can then threaten or employ violence to dissuade an adversary from taking unwanted actions. An example is Vietnam, which is modernizing its naval and air forces, improving its paramilitary forces (Coast Guard and Fishing Patrol Agency), purposefully strengthening relationships with India, Russia, Japan and the United States, and expanding its defense industry. Less obviously, the freedom of navigation transits through the South China Sea by U.S. Navy warships are also examples of balancing with the implicit threat of armed response in the event of trouble.

Such strategies, however, play to China’s strengths, and so far have been easily countered.

In any test of relative power, China has advantages over all those involved in the South China Sea dispute except the U.S. (and even here, some predict China’s GDP will surpass America’s in time). Moreover, while a significant proportion of the world’s merchant shipping transits the area, much of it is en route to China. So China has the greater stake in this dispute, and thus greater credibility. The notion of waging a war with China over ownership of small islands in the South China Sea therefore seems far-fetched. The costs would be too high, the returns too low.

Even so, China is using a carefully calibrated blend of naval, private and commercial means in its territorial expansion to make the use of military force in response appear grossly inappropriate. How to respond for example, when a ship on a freedom of navigation transit is stopped by picketing fishing boats. China’s sophisticated approach is well-calibrated to control the situation without giving others cause to resort to armed conflict. And behind all this lies the fact that, for many countries involved in the South China Sea dispute, China is their major export market. This economic “carrot” provides a ready bargaining tool for rewarding or punishing states as needed.

If balancing is not a credible strategy, others emphasize a focus on a rules-based order to constrain China's actions. Such an order envisages states agreeing to be bounded by particular rules so that all benefit.

China counters by arguing that it abides by the rules, but that only some rules are pertinent. In China’s view, the disputed islands were lawfully returned after World War II under the 1943 Cairo Declaration and 1945 Potsdam Proclamation. Others insist the 1951 San Francisco Peace Treaty with Japan and the 1982 UN Convention on the Law of the Sea should hold sway. China counters that it is not a party to the San Francisco Treaty and signed UNCLOS with specified reservations applying to the South China Sea issue. China is therefore “observing international law in the true sense.”

China's stance has regional resonance. For instance, China avoids arbitration at the International Court of Justice (ICJ) over seabed boundaries, just as Australia has done with its smaller neighbor Timor Leste. The Philippines has sought an ICJ ruling against China’s island grabs, with China responding by declaring it will ignore the result. Again, such a stance is not unusual: Japan is ignoring an ICJ ruling on whaling in the Southern Ocean.

China appears determined to seek a zero-sum outcome. It wants territorial ownership of the islands it claims, so cooperative strategies in which benefits are shared among all parties appear impractical. So if 'balancing' and 'rule of law' are both ineffective strategies, what will influence Chinese policymakers? Two different approaches to impose costs on China for its behavior in the South China Sea appear possible.

The first strategy would be to target specific issues the Chinese Communist Party (CCP) is particularly sensitive about. The fundamental aim of the CCP is regime survival, which hinges both on retaining popular legitimacy and on repression. To this end, the state maintains the “great Chinese firewall,” suppresses dissenters, censors news and rewrites history. Today’s CCP leadership is particularly sensitive to threats to the political status quo, creating pressure points that could be exploited by states wanting to influence China's behavior in the South China Sea. Meeting the Dalai Lama, openly discussing China's human rights problems, supporting a free press, assisting open internet access or vigorously marketing China’s true history are all options.

Linking the CCP’s domestic legitimacy deficit to the South China Sea dispute could be expected to meet substantial push-back. But strategy is about bargaining, and without imposing costs, Beijing is unlikely to change its mind. China is itself quite adept at using linkage strategies. As Krista Wiegand showed, between 1978 and 2008 China linked claims on Japan’s Senkaku islands to other issues some twenty-six times, gaining numerous concessions.

The second approach would aim to constrain China’s future freedom of action. China has defended its land reclamation activities in the South China Sea as providing new ports and airfields for regional search-and-rescue and disaster relief operations. Recently, Foreign Minister Wang went further, declaring: “China stands ready to open these facilities to other countries upon completion.” This offer could be accepted. A public diplomatic effort could be mounted to permanently place UN or ASEAN facilities and personnel on the islands to undertake civilian disaster relief tasks indefinitely. The islands would then be reconceptualized not as China’s exclusive property but rather as new territory shared with the world for all nations’ benefit. China’s use of the islands for military activities would be sharply constrained.

Either approach could form the basis of a new strategy to replace the current failing ones. On the other hand, if imposing costs is considered to not be worth the outcomes, then it might be wiser to accept China’s South China Sea fait accompli. Continuing with the present ineffectual responses seems unwise. Chinese decision-makers could learn the wrong lessons and come to believe that assertive strategies are the most efficacious way to get favorable outcomes. A China that learns the wrong lessons might be worse than a China that gains the control it seeks over the South China Sea.