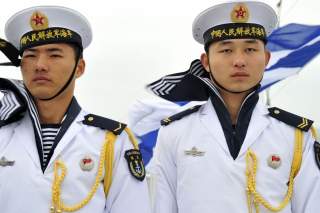 Beneath its surface-level bluster, China’s authoritative response to the United Nations Convention on the Law of the Sea (UNCLOS) arbitration this week contained welcome hints that China may be subtly, and under cover of a strong stance on its South China Sea territorial sovereignty, bringing its South China Sea maritime rights claims into line with UNCLOS.

The statement of the Chinese government, released in direct response to the arbitration, strongly implied that China does not in fact claim historic rights over the whole area of the nine-dash line. This expansionist reading of the nine-dash line was never an official policy position. But it has underpinned a great deal of the most worrying Chinese behavior in the South China Sea, especially its program of patrols and coercive actions along the outer edge of the nine-dash line.

The statement contained five numbered points, each explaining a different aspect of China’s position. It restated China’s historical claim to territorial sovereignty and ‘relevant rights and interests’ over islands in the SCS, and reemphasized the government’s actions to uphold said sovereign rights and interests since 1949.

China also identified four elements of China’s rights and interests in the South China Sea: sovereignty over islands together with the internal waters, territorial seas and contiguous zones based on the Spratlys, an exclusive economic zone (EEZ) and continental shelf rights based on the Spratlys, and other historic rights. The statement reiterated China’s opposition to other countries’ occupation of some of the Spratlys, but voiced China’s commitment to freedom of navigation for international shipping.

This was probably the most comprehensive encapsulation of China’s claims ever made in an official document. None of the elements are new, but they have never appeared side-by-side in one document before. The claim to ‘historic rights’, for example, is included in China’s 1998 EEZ and Continental Shelf law, but that document does not refer to the nine-dash line. A diplomatic note to the UN in 2009 included the nine-dash-line map for the first time officially, but didn’t mention historic rights. And another 2011 note to the UN specified that the Spratlys were entitled to an EEZ and continental shelf, but didn’t include the nine-dash-line map or ‘historic rights’.

The nine-dash line, according to the new statement, was created to ‘to strengthen the administration over’ the Chinese-claimed islands in the South China Sea. It makes no mention of ‘historic rights’.

The omission of a link between the nine-dash line and China’s ‘historic rights’ wouldn’t on its own mean much if they weren’t mentioned elsewhere in the statement. But they are: they are on the list of four elements that comprise China’s maritime claims, where they are once again listed separately from the territorial claims represented by the nine-dash line.

By referring to the nine-dash-line map as evidence of China’s territorial sovereignty over islands — but not linking it to the EEZ, continental shelf and ‘historic rights’ it also discussed — the statement effectively decoupled the map from China’s maritime rights claims in the area. The implicit link between the two was the basis of one of the tribunal’s major findings against China.

Perhaps its greatest significance is found in an extremely subtle piece of language: the designation of Nanhai Zhudao as the source of China’s EEZ and continental shelf claims. This phrase, meaning ‘certain islands of the South China Sea’ in Mandarin, was rendered in pinyin, rather than translated, in the English version.

The background is crucial. China explicitly claimed in a 2011 diplomatic note to the UN that the Nansha Qundao — that is, the Spratlys — are ‘fully entitled’ to an EEZ and continental shelf. The White Paper does not repeat this claim, instead citing Nanhai Zhudao, the collective term for all of China’s claimed offshore islands in the area, as the basis of its EEZ and continental shelf claims.

This tiny tweak allows for a reading of China’s position that does not contradict the Tribunal’s finding that the Spratly Islands are rocks: the Nansha Zhudao includes the Paracel Islands and also the Pratas Islands, whose island or rock status the tribunal did not rule on.

Woody Island, the largest of the Paracels, is about 4–5 times bigger than Itu Aba, the biggest Spratly, as well as being located much closer to both Chinese and Vietnamese coastlines. For that reason it has probably been subject to a much more intensive human presence historically. It therefore stands a much better chance of avoiding the ‘rock incapable of sustaining human habitation’ designation, and sustaining an EEZ and continental shelf claim.

So even as the Party-state condemns the ruling as a ‘farce’ and loudly proclaims China’s non-acceptance, non-compliance and non-implementation, these subtle clarifications raise the possibility of a Chinese maritime rights claim in the South China Sea that looks something more like the UNCLOS-compliant one illustrated above.

Of course, this doesn’t imply they are going to start drawing new lines on maps to make all these suggestions explicit — more likely, they’ll want to avoid precisely that kind of visual depictions of a backdown.

So far major Chinese news portals have all led with variations of the headline: ‘Xi Jinping says South China Sea Islands have always belonged to China’ — a statement that the UNCLOS-mandated tribunal did not in any way challenge. Driving attention towards this tough-sounding stance on territorial sovereignty provides good political cover for the quiet clarification of China’s maritime rights claims that may be underway.

Andrew Chubb is a PhD Candidate at the University of Western Australia. He is conducting research on nationalism and public opinion in Chinese foreign policy.