South China Sea Drama: One Nation Is Building Up Its Military Because of It (Not China) 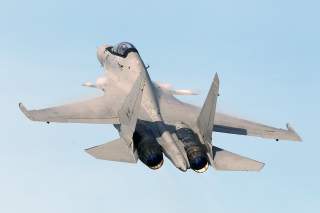 As tensions escalate over which nations should control the South China Sea, Malaysia is embarking on a military buildup.

The buildup comes as new Prime Minister Mahathir Mohamad defeated last month incumbent Najib Nazak, who was viewed as being too soft on China. Chinese ships have encroached in oil-rich waters and fishing grounds claimed by Malaysia as part of its Exclusive Economic Zone.

Malaysia recently announced that it would upgrade its naval aircraft as well as purchase ship-based naval helicopters. The enhanced naval aviation capabilities are intended to support a massive transformation of the Royal Malaysian Navy’s surface fleet, which will consolidate from fifteen old classes of warship to just five modern classes.

Last year, Malaysia launched the first of its 3,100-ton Littoral Combat Ships, a stealth design based on France’s Gowind 2500 corvette (not the American Littoral Combat Ship). Six ships are scheduled to be deployed by 2023, with the first arriving by 2019. The 3,100-ton LCS is small but powerfully armed with two quadruple Norwegian-made Naval Strike Missile anti-ship missile launchers, a sixteen-cell Mica surface-to-air missile launcher, cannon and torpedoes.

In addition, Malaysia is building more patrol vessels, including a second generation of the 1,850-ton Kedah-class based on Germany’s MEKO 100 design. Ironically, in light of Sino-Malaysian tensions, Malaysia is also looking at a Chinese-designed Littoral Mission Ship, of about seven hundred tons. The new surface fleet will be sustained by three fifteen-thousand-ton Multi-Role Supply Ships.

Meanwhile, in the air, Malaysia is searching for affordable new aircraft now that the Royal Malaysian Air Force has grounded its aging MiG-29s, leaving its combat air fleet with eighteen Russian-made Su-30MKMs and eight old American-made F-18Ds. On the ground, Malaysia is ordering French-made 105-millimeter howitzers.

With Vietnam and the Philippines also buying new weapons, this suggests an arms race in the South China Sea. Yet Asia expert Alexander Vuving argues otherwise.

“Although the buildup in the three Southeast Asian claimants [Malaysia, the Philippines and Vietnam] was all triggered by China’s perceived aggression, there is no arms race in the SCS,” Vuving told the National Interest. “The long-term objective seems to be what I call ‘minimal deterrence’ rather than parity or superiority in competition with any other claimants.”

The goal is not to threaten China, nor does China feel threatened, says Vuving, a professor at the Daniel K. Inouye Asia-Pacific Center for Security Studies. Nonetheless, domestic politics demand that the smaller states be seen defending national sovereignty. “It is to assuage the domestic constituents on concerns that the government is not doing enough to defend the country,” Vuving adds.

Chinese muscle-flexing has alarmed Malaysians and spurred a backlash. “China’s encroachment in Malaysia’s EEZ and the permanent presence of Chinese navy and coast guard ships in the oil-rich areas off the Malaysian coast have alerted domestic groups in Malaysia about the Chinese threat,” says Vuving.

Nonetheless, Malaysia’s policy toward China is cautious rather than confrontational. “Malaysia is gravely concerned about China’s dominance in the SCS but it does not want to publicize its uneasiness with China,” Vuving says. “Some people characterize Malaysia's posture toward China as accommodationist, but I don't think this reflects the nuanced realities. Malaysia tries not to irritate China but behind the scenes it is pursuing an active policy reaching out to those who can help it redress the regional balance of power.”