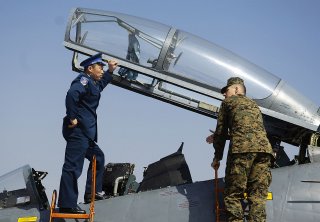 Just when the South China Sea seemed to have quietened down, two key players, China and the United States, have embarked on a series of provocative gestures. But the distrust between these major powers in the South China Sea inhibits their ability to deal with more serious issues in the region and the world at large.

In a speech in Sydney on December 14, 2016, Admiral Harry Harris, head of the U.S. Pacific Command, fueled tensions by saying that the United States would continue its freedom of navigation operations in the South China Sea to challenge China’s claims. Harris has previously worried the White House with blunt statements on China and the South China Sea. But with the White House now between administrations, Harris isn’t worried about any political concerns anymore and the incoming Trump administration might even welcome his provocations.

Meanwhile China has installed weapons, including anti-aircraft and anti-missile systems, on its artificial islands in the South China Sea despite earlier assurances that it would not further militarize the sea. The Chinese would argue that these systems are defensive rather than offensive in nature.

The South China Sea situation has become a major strategic rationale for the US Navy. In the same week as Harris’ comments in Sydney, a new Force Structure Assessment issued by the Navy provided for an increase from 308 to 355 ships — beyond even the Trump administration’s stated 350-ship goal. China is a key justification for this force expansion.

US–China tensions were exacerbated by Donald Trump’s acceptance of a phone call from Taiwanese President Tsai Ing-wen earlier in December, which broke decades of diplomatic protocol. This led to a formal protest from China but was subsequently played down in Chinese state media.

Then, on December 8, a Chinese naval vessel shadowing the USNS Bowditch in the South China Sea recovered an oceanographic glider that had been launched by the US ship. These devices are used by the US Navy to collect scientific data, such as salinity, temperature and current flow.

The incident occurred about 70 nautical miles off Subic Bay, well within the exclusive economic zone (EEZ) of the Philippines. While the Chinese vessel’s recovery of the drone was unlawful, the legality of the research activities by the USNS Bowditch are also open to question. Marine scientific research in an EEZ is under the jurisdiction of the coastal state and should only be undertaken there with approval. It’s unlikely that approval for this research was sought from and given by the Philippines.

This issue is symptomatic of a bigger problem with US operations in the South China Sea.

The South China Sea is often referred to as ‘international waters’, although most of the sea is part of the EEZs of the littoral states. These states have significant rights and duties in these waters, including an obligation to cooperate in their management. To refer to them as ‘international waters’ detracts from those rights and duties. High sea freedoms in another country’s EEZ must be exercised under the UN Convention on the Law of the Sea (UNCLOS) with due regard to the rights and duties of the coastal state.

US commentators frequently refer to the importance of a rules-based order in the South China Sea, but by persistently refusing to acknowledge the full nature of the EEZ regime the United States itself is not following the ‘rules’. I have previously argued that the United States is ‘turning the clock back’ on the carefully balanced EEZ regime established by the convention. This may be one reason why the US has not yet ratified UNCLOS.

The South China Sea will be a more dangerous place in the future if distrust between China and the United States continues increasing. This is unfortunate as it comes at a time when China and ASEAN were starting to make progress towards improving arrangements for managing the sea and activities within it.

But at the end of the day, does the South China Sea matter that much?

Major conflict is much more probable in Northeast Asia than in the South China Sea. The Korean Peninsula and North Korea are by far the most serious threat to regional stability followed by the possibility of a deteriorating situation with Taiwan. That risk has only been increased by indications that the Trump administration may revisit the US ‘One China’ policy.

Much of the current distrust between China and the United States has its origins in the South China Sea. That distrust inhibits their bilateral relations more generally, including their ability to deal with the situations in North Korea and Taiwan and more generally across the world.

China and the United States have a responsibility to temper their actions and rhetoric in the South China Sea and keep their eyes on the bigger global and regional pictures. That’s what the rest of Asia would like to see.

Sam Bateman is Professorial Research Fellow at the Australian National Centre for Ocean Resources and Security, University of Wollongong, and Advisor to the Maritime Security Programme at the S. Rajaratnam School of International Studies, Nanyang Technological University.