South China Sea Showdown: Part of a Much Bigger Nightmare 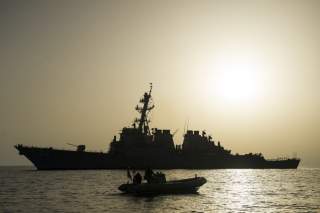 Sometimes it's a good idea to just state the obvious. And the obvious, when it comes to the South China Sea and tomorrow’s impending ruling in the International Court of Arbitration on the matter of China vs. the Philippines is clear: no matter what happens, no matter what the ruling says or doesn’t say, a ‘sea’ of tensions will remain between the People’s Republic of China and various claimants in this important body of water, and between Beijing and Washington. It seems almost certain that things are going to go from bad to worse—possibly very quickly.

First, let us have a look at the immediate, bilateral challenge before us in the South China Sea between China and the Philippines. It seems near-definite the tribunal will nullify some part of China’s claims in the area, whether it's declaring Scarborough Shoal, taken from The Philippines in 2012, a rock and thus ineligible for a 200 mile Exclusive Economic Zone (EEZ) and/or in some way damaging the vast, unreasonable assertions Beijing has placed in its nine-dash-line declaration, essentially claiming 85% of the South China Sea as its own.

No doubt Beijing will respond with fire, and, in fact already has. Chinese President Xi Jinping, just days ago, has stated that China is “not afraid of trouble”, a line stated in various iterations and on multiple occasions by other Chinese officials. But Beijing has also signaled that talks are possible, with Manila also indicating talks could be on the table. The challenge of course is China has stated on numerous occasions that Scarborough Shoal—and the larger South China Sea—is effectively their territory. Considering the concrete nature of these statements, and the sheer amount of them, Beijing has not exactly given itself any wiggle room to negotiate. Additionally, domestic audiences back home would likely become enraged over any sort of negotiated settlement—what some would label as a sign of weakness at a time when the Chinese Communist Party is very concerned over any sort of domestic unrest. Unfortunately for the Asia-Pacific and larger Indo-Pacific region, it seems such negotiations will either end quickly or drag on for some time without any sort of agreement. At either point, China will likely respond forcefully, either with an Air Defense Identification Zone (ADIZ), or the dredging around and building of a military outpost at Scarborough Shoal—with a larger regional crisis in the offing.

Moving past Beijing and Manila, what happens in regional capitals is also crucial. Vietnam for example, if seeing a positive result in the Hague for the Philippines, might just decide to wage their own legal challenge against China—aka what many describe as “lawfare”. Japan could also join such an effort, deciding to take its chances in the courts on the always hotly disputed East China Sea and Senkaku Islands or even join some sort of international class-action lawsuit against Beijing in the South China Sea (keep in mind, 60% of Japanese oil imports go through this critical commons). Any negotiations between Manila and Beijing at that point would simply fall apart if any or all of the above occurred—with China seeing no other choice but to respond in some sort of aggressive manner.

And then there is the real test—what happens to U.S.-China relations? At the moment, Beijing is winding down military exercises in the South China Sea, and Washington has an aircraft carrier battle group in the region as well as rotational aircraft based in the Philippines. Should tensions rise quickly, America is certainly positioned to react in multiple different ways if needed—to challenge a new Chinese ADIZ by simply launching carrier-based aircraft into the sky or from land, to begin new freedom of navigation operations or even dare I say honor treaty commitments to Manila or others if it came down to it—the scariest scenario of all.

But there is also a bigger problem at play—and one that won’t be solved anytime soon. China is a rising great power, and it simply feels the international system in the Asia-Pacific is not commensurate with its wants and needs. Beijing might have accepted Tokyo’s rule over the Senkakus and mastery of the East China Sea when it was weak—but China arguably has a stronger military and certainly larger economy, why accept that now? Taiwan, according to Chinese contemporary thought, is a renegade province and figment of the Cold War, a territory that needs to return to the fold, sooner rather than later. And as for the South China Sea, Beijing, being the region's economic and military heavyweight, should be given the greatest of says. Three incredibly difficult problems to solve, all stemming from the same foundation—a nation that is on the rise that sees a regional order that does not fit with its new status. Oh, and the United States, it simply needs to mind its business and leave the region, or at the very least not attempt to contain or constrain Chinese actions, now and in the future. The Thucydides Trap, it seems, has been set—and could entangle the region.

So get ready, the next few days and weeks are likely to be a bumpy ride indeed. However, the South China Sea challenge is part of a much bigger problem—a problem that history shows more often rather than not does not end very nicely.