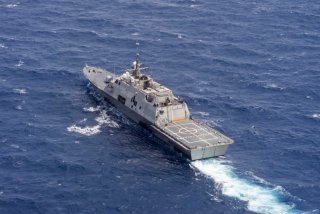 After many months of intense debate inside the Obama Administration, the U.S. conducted a freedom of navigation operation (FONOP) in the South China Sea on October 26. The destroyer USS Lassen sailed for over an hour within 12 nautical miles of Subi Reef, a low tide elevation (LTE; a feature that was formerly submerged at high tide) which China has transformed over the past year and a half into a large artificial island.

The Lassen was accompanied by two maritime surveillance aircraft, a P-8A Poseidon and a P-3 Orion. Pentagon officials leaked information about the FONOP before it took place as well as after it was completed, but refrained from speaking on the record about the mission.

The FONOP was not intended to challenge Chinese sovereignty claim to Subi Reef or to any other features in the Spratly archipelago. It was also not meant to be hostile or provocative. Rather, the operation was aimed at asserting the rights of military and civilian vessels to operate anywhere allowed by international law.

Every year the U.S. Navy conducts dozens of FONOPS around the globe against excessive maritime claims made by allies and adversaries alike. In fact, on this particular mission, the USS Lassen not only sailed inside the 12nm that would form a territorial sea if Subi Reef in its natural state had been a rock (as defined under Article 121[3] of the Law of the Sea Convention), but also conducted patrols inside the 12nm of contested holdings of the Philippines and Vietnam. This was a deliberate effort to signal that the U.S. is exercising a universal principle, not singling out Beijing.

China has never officially defined the expansive nine-dashed line claim it submitted to the UN in May 2009 and has not clearly stated what maritime entitlements it believes are associated with the built-up rocks and LTEs it occupies in the Spratly Islands.

Unlike in the Paracel Islands, China has not drawn baselines in the Spratlys from which zones of jurisdiction would be measured. Nevertheless, China's 1992 law on the territorial sea claims a 12nm territorial sea from all Chinese territory without distinction. Moreover, Chinese official statements and actions indicate that Beijing claims territorial sovereignty over other fully submerged features in the South China Sea, such as Maccelsfield Bank and James Shoal, although international law does not support such claims.

Tellingly, the Chinese foreign ministry spokesman stated that the USS Lassen “illegally entered” the waters near the island “without receiving permission from the Chinese government,” and by doing so “violated UNCLOS and other international laws as well as related Chinese domestic laws.” This suggests that China is in fact claiming sovereignty over a maritime zone around Subi, and likely around other LTEs including Mischief and Gaven Reefs. Thus, the US FONOP appears justified in challenging an excessive Chinese maritime claim and signals American resolve to preserve freedom of navigation and overflight on the high seas.

Two PLAN vessels, the Lanzhou (a Type 052C missile destroyer) and Taizhou (a Type 053 frigate), shadowed the Lassen and issued warnings to get out of the waters around Subi, but apparently did not interfere with the operation. Chinese media reported that the PLA Navy had taken the necessary steps to defend Chinese sovereignty. China doesn't want a military confrontation with the U.S. Navy, but also wants to show its people that it will not be pushed around by the U.S.

Pentagon officials were quoted on background saying that the operation would not be a one-off. Only a sustained program of regular freedom of navigation assertions can ensure that freedom of the seas for all seafaring nations endures. Future U.S. operations are likely to be conducted with less fanfare, however.

Over time, China will likely adjust to the 'new normal' just as Japanese Coast Guard ships have been forced to tolerate regular incursions by Chinese Coast Guard vessels around the Senkaku Islands (although these patrols are intended to assert sovereignty, not defend freedom of the seas).

In the short run, Beijing will blame the U.S. for militarizing the South China Sea and use the FONOP around Subi Reef as a justification to continue its own militarisation. Of course, Chinese military activity was well underway prior to the US. operation, notwithstanding President Xi Jinping's statement at a joint press conference with President Obama that China has no intention to militarise the South China Sea. US restraint until now did not stop China from engaging in a fast-paced program of land reclamation and construction over the past year and a half. It is undeniable that China's laying down of airstrips, dredging deep harbours, installing radars and building hangars for aircraft constitute militarisation.

In the long run, conducting FONOPs is only one tool to influence China's behaviour and calculus. Such operations must be part of a larger whole-of-government  strategy.

Other nations must also bring some pressure to bear if Beijing is to be persuaded that exercising self-restraint and relying on diplomacy to manage its territorial disputes with its neighbours better serves Chinese interests. Australia and Japan should consider conducting their own FONOPs around China's former LTEs to signal their concerns. Members of ASEAN who share concerns about China's ambition to exercise greater control over the sea and airspace in the South China Sea must also step up to the plate. It is notable that although countries such as Vietnam, Malaysia, and Singapore quietly applauded the U.S. mission, they refrained from issuing statements of support.

Shaping China's choices and preserving a rules-based global order will require greater coordination and burden sharing. Is the region up to the task?