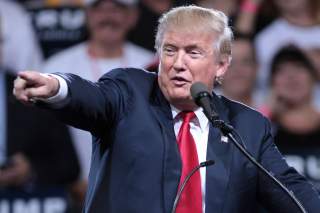 One of the fruits of Donald Trump’s unexpected victory is the opportunity to fill thousands of political positions. But he is preparing to become the national government’s chief executive without a deep personnel bench behind him. There is no Team Trump like Team Clinton.

However, personnel are policy. In fact, that became the mantra of the incoming Reagan administration, of which I was a part back in 1980. Unfortunately, Team Reagan often failed to act accordingly—for instance, choosing as secretary of education someone who opposed Ronald Reagan’s proposal to dismantle that bureaucracy. President-elect Donald Trump should avoid making a similar mistake.

Politico has reported that “as Trump and his aides vet nominees for his cabinet and lay out a first 100-day agenda, they are leaning heavily on the sort of DC insiders that the billionaire railed against on the campaign trail.” This could prove especially disastrous when it comes to foreign policy.

The president-elect obviously has strong, though ill-formed, opinions on foreign policy. He collected a wide variety of advisers with little unity of views. Implementing his vision will require the right personnel. While few people may hold his exact mix of views, he needs staffers who reject the promiscuous intervention that characterized both Presidents George W. Bush and Barack Obama.

Unfortunately, news reports suggest that the transition team is considering as top appointees people who hold views far different than those of Donald Trump in important areas. For instance, suggested for secretary of state are John Bolton, Kelly Ayotte, Newt Gingrich and Rudy Giuliani. All are national figures, but none shares the doubts and qualifications regularly expressed by the president-elect about today’s highly interventionist, even militaristic foreign policy.

At least they supported the president-elect—though Ayotte rescinded her backing once the going got rough. Frankly shameless is the attempt by some of Trump’s sharpest critics to clamber aboard the unexpected bandwagon.

A number apparently have rejected the opportunity to serve, and the lack of qualified appointees could hinder his administration. Worse, however, would be to choose appointees determined to frustrate any Trump reforms. For instance, during the campaign 122 GOP-leaning national-security analysts signed a letter attacking Trump. Among them was Max Boot of the Council of Foreign Relations.

Although long allied with the Republican Party, he appeared in a Hillary Clinton campaign ad warning against allowing the business mogul near the nuclear button. Yet, the day after the election, Boot suggested that Trump could end up as a relatively conventional Republican if he staffed “his administration with competent professionals with prior government experience.” The week after the vote Boot wrote that he hoped #NeverTrumpers would overcome the temptation not to serve and “the two sides can come together.” Trump’s opponents need to “save him from himself.”

Boot is not the only former Trump recalcitrant to change positions as the possibility of high office looms. The New York Times recently ran a story headlined “‘Never Trump’ Becomes ‘Maybe Trump’ in Foreign Policy Sphere.” The Times found what it called a “softening” of opposition to working for Trump, and noted resumes from #NeverTrumpers arriving at the transition.

Politico ran a similar article, entitled “GOP national security elites agonize: Should I work for Trump?” Those who criticized him, explained Politico, now face “a gut-check moment that was never supposed to happen because Trump was never supposed to win.” However, the prospect of high office unexpectedly beckons and “is enticing.”

William Imboden, who worked for George W. Bush, author of the disastrous Iraq invasion, told the Times: “Any patriotic American who is asked to serve our country should be willing to do so and should give serious consideration to whatever position is offered.” Mary Beth Long, another former Bush appointee, explained that the GOP candidate had “matured” during the campaign, an interesting observation given the controversy generated attending his campaign up until the end.

A third former Bush official, Eliot A. Cohen, said he didn’t expect to be asked but “you never rule out something that a president asks you to do.” (But after an apparent run in with transition personnel, he flipped to counsel rejection.) Former Richard Cheney aide Eric Edelman told the Times that he wouldn’t serve, but he wouldn’t judge younger colleagues who feared being frozen out for years.

James Glassman, employed by President Bush, told Politico that he “would be proud to work” with the businessman-turned-president, who would need “top-tier, experienced people.” Danielle Pletka of the American Enterprise Institute, a leading neocon, opined that if someone serious such as Bolton were chosen as secretary of state, a number of his campaign critics “will set aside their concerns to work with somebody in whom they have confidence.” However, she said she had “no idea” as to what she would do if asked.

The motivation could be “a stated sense of patriotic duty,” noted Times reporters Mark Mazzetti, Helene Cooper and Eric Schmitt, or perhaps “a somewhat less noble motive to avoid years of being excluded from Washington power circles.” After all, for those committed to an active, warlike foreign policy, it’s not fun to remain outside of government. The last eight years already have been a long exile. To wait another four or eight years during a GOP administration—which easily might be followed by another Democratic president—could result in many wannabe grand strategists retiring without having an opportunity to initiate even a small war.

Some outsiders also are urging past critics to clamber aboard the Trump bandwagon. Emeritus professor Richard H. Kohn addressed an open letter to “Republican national security experts” who had opposed Trump. They “must serve in a Trump administration if given the opportunity” in order to remedy the president-elect’s obvious deficiencies. “You must not turn down a reasonable offer,” he argued, whatever that means. Of course, added Kohn, they should be prepared to resign if they don’t believe they can remain.

Similarly, New York Times columnist Ross Douthat said the recalcitrant had a duty to serve “precisely because they fear how Trump might govern.” That is, their duty is to neuter his administration from the start. Douthat emphasized concerns about Trump’s temperament, but for GOP uber-hawks the chief fear always has been inadequate enthusiasm for the Republican Party’s recent “bomb first” approach. While Douthat worried that Trump’s policies might threaten “world peace,” experience suggests that the latter’s Republican Party critics would be far more likely to do so.

Apparently at least some of Trump’s backers recognize the danger of including those who oppose his agenda. Before the election, adviser and retired general Michael T. Flynn reportedly criticized those who pushed America into “too many conflicts that just seem too perpetual.” House Intelligence Committee chairman Devin Nunes told the Times that it was “refreshing” that many of Trump’s critics, who never believed he would win, “are not in a position to be in the next administration.” Rep. Duncan Hunter, who backed Trump early, told Politico that “I don’t think they’re going to be bought on board, even if they wanted to,” and that “Donald Trump remembers who supported him and didn’t.”

Indeed, during the campaign, candidate Trump said, “My goal is to establish a foreign policy that will endure for several generations. That’s why I also look and have to look for talented experts with approaches and practical ideas, rather than surrounding myself with those who have perfect resumes but very little to brag about except responsibility for a long history of failed policies and continued losses at war. We have to look for new people.”

As he now prepares to fill his administration, he needs to remember that pledge.

There is much in what the president-elect said during the campaign for anyone to criticize. But he dramatically broke with the militaristic nationalists and neoconservatives who dominated GOP approaches to foreign policy in recent years. Trump criticized America’s one-sided alliances and nation building, recognized the importance of a peaceful relationship with Russia, endorsed diplomacy, almost alone among Republican candidates criticized Bush’s Iraq War, and, perhaps most notably, promised that “war and aggression” would not be his “first instinct.”

If he believes what he said, he must not staff his administration with those for whom “war and aggression” would be their first instinct. (One of the reasons many GOP hawks backed Clinton is that her first instinct always has been to send in the bombers. In fact, she has supported every U.S. war over the past two decades.)

Given Donald Trump’s eclectic view, diversity of appointments is inevitable. Which makes it more important to have top officials open to different viewpoints. It is especially important that the men or women at the top do not share reckless views rejected by the American people.

Under the current occupant of the White House, a Nobel Peace Prize winner, the United States has never been at peace. It almost certainly would not have been so under Clinton. President-elect Trump can change that, but he needs personnel who will support rather than frustrate his ends. If he succeeds, he will change U.S. foreign policy and make history.