Stealth vs. Cruise Missiles: What Is the Best Option if America Goes to War in Syria? 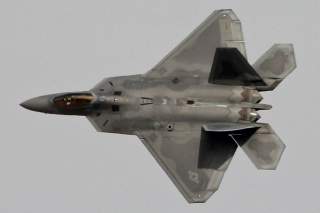 In the event that the United States decides to expand its air campaign in Syria to either carry out additional punitive strikes or to overthrow the Assad regime, the Pentagon has more options than simply relying on stealth aircraft to suppress or destroy enemy air defenses.

While the U.S. Air Force is a staunch advocate of relying on stealth publicly, there are others ways to defeat advanced Russian air defenses such as the S-400 or S-300V4. Indeed, even the Air Force’s own tactical gurus at its Warfare Center at Nellis Air Force Base, Nevada, acknowledge that stealth works best when used in concert with electronic warfare. However, naval officials take a different view. In the eyes of many in the Navy, stealth is not an absolute necessity to defeat these latest generation Russian surface-to-air missile (SAM) defenses—a combination of standoff weapons and electronic warfare can yield similar results for far less money.

“Multiple ways to crack this nut. Sure, you could use stealth to get in and get out but why?” a senior naval aviator with extensive experience flying the Boeing F/A-18E/F Super Hornet told The National Interest.  “I'd rather conduct strikes on SAM sites (IADS rollback) to create a corridor to flow aviation assets into and out of the country. More permissive and provides greater freedom to operate.”

In the case of Syria, even airpower advocates with strong ties to the U.S. Air Force acknowledged that cruise missiles and standoff weapons could be used in place of expensive fifth-generation stealth fighters such as the Lockheed Martin F-22 Raptor and the F-35 Joint Strike Fighter.

“Cruise missiles such as Tomahawks and JASSMs [Joint Air-to-Surface Standoff Missile] would probably be used to surprise S-400s and S-300V4s,” airpower analyst Mark Guzinger—a former B-52 bomber pilot and senior fellow at the Center for Strategic and Budgetary Assessments—told The National Interest. “There may be little need to use manned aircraft against these threats, especially when other options exist to suppress them. I also suggest that an initial wave of standoff strikes would be launched by U.S. bombers operating from CONUS bases.”

While the U.S. Air Force did launch strikes with the Northrop Grumman B-2 Spirit stealth bomber during the 2011 campaign, the F-22 Raptor was nowhere to be found. Even though a squadron of the stealthy fighters was passing through Europe on their way home from the Middle East, the Air Force did not re-task the jets to support the campaign against Gaddafi. At the time, the reason why the Raptors were not used was somewhat of a mystery. And, indeed, the Air Force has never offered a good explanation since that time—except for vague allusions that the F-22 is not a multirole aircraft.

As for why the Air Force is always advocating for stealth aircraft as the only way to defeat advanced enemy air defenses, it seems to come down to a fundamental difference in philosophies between the services. “Gotta justify that expensive equipment!” the Super Hornet pilot said—jesting about the Air Force’s obsession with stealth.