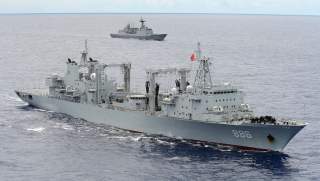 “In recent years, China’s navy has been launching new ships like dumping dumplings [into soup broth].” This phrase has circulated widely via Chinese media sources and websites. Accompanying it are ever-more-impressive analyses and photographs, most recently of China’s first indigenous aircraft carrier, now under construction in Dalian. The driving force behind all this, China’s shipbuilding industry, has grown more rapidly than any other in modern history.

One of this century’s most significant events, China’s maritime transformation is already making waves. Still, however, China’s course and its implications—including at sea—remain highly uncertain, triggering intense speculation and concern from many quarters and in many directions. Beijing has largely met its goal of becoming the world’s largest shipbuilder. Yet progress remains uneven, with military shipbuilding leading overall but with significant weakness in propulsion and electronics for military and civilian applications alike. It has thus never been more important to assess what quality and quantity of ships is China able to supply its navy and other maritime forces with, today and in the future. Somewhat surprisingly, however, there has been insufficient attention to this topic, particularly from a U.S. Navy (USN) perspective.

To bridge that gap, a diverse group of some of the world’s leading sailors, scholars, analysts, industry experts, and other professionals convened at the Naval War College (NWC) on 19-20 May 2015 for a two-day conference on “China’s Naval Shipbuilding: Progress and Challenges.” Hosted by NWC’s China Maritime Studies Institute (CMSI), it was cosponsored with the U.S. Naval Institute (USNI), which will publish the resulting edited volume early next year.

CMSI was formally established on 1 October 2006. Its research and analysis of China’s maritime capabilities helps to inform USN leadership and supports NWC in its core mission area of helping to define the future Navy. The annual CMSI conference is a principal function of the Institute, supporting focused examination of the full range of Chinese maritime developments.

This conference, the tenth in a series, focused on a topic of great interest to USN leaders: China’s naval shipbuilding industry. “Shipbuilding” includes construction of new vessels, the repair and modification of existing ones, and the production and repair of shipboard and associated equipment. Paper presenters, discussants, and other attendees analyzed China’s shipbuilding capacity in order to deepen understanding of the relative trajectories of Chinese and American naval shipbuilding and possible corresponding challenges and responses for the USN. The overarching questions, of paramount importance to USN and other observers, included:

- What are China’s prospects for success in key areas of naval shipbuilding?

- What are the likely results for China’s navy?

- What are the implications for the USN?

As the self-designated target year for China to become the world’s largest shipbuilder, 2015 was a particularly appropriate time for the conference. In some respects, China has already accomplished its goal, yet major problems and uncertainties remain as we look forward over the next fifteen years through 2030—the rough timeframe for this conference’s analysis.

This is an exciting time to observe the fruits of Chinese naval shipbuilding, and perhaps a significant inflection point. As part of its unprecedented maritime emphasis overall, China’s 2015 Defense White Paper states: “the traditional mentality that land outweighs sea must be abandoned… great importance has to be attached to managing the seas and oceans and protecting maritime rights and interests.” The U.S. Office of Naval Intelligence (ONI)’s 2015 report concludes: “China is only in the middle of its military modernization, with continued improvements planned over the following decades. As we view the past 20 years of [People’s Liberation Army Navy/PLAN] modernization, the results have been impressive, but at its core the force has remained essentially the same—a force built around destroyers, frigates and conventional submarines. As we look ahead to the coming decade, the introduction of aircraft carriers, ballistic missile submarines, and potentially a large-deck amphibious ship will fundamentally alter how the PLA(N) operates and is viewed by the world.”

Over one hundred and fifty attendees participated in CMSI’s conference. They hailed from such institutions as Harvard, Yale, Princeton, MIT, Johns Hopkins, University of California, and Virginia Tech; together with such organizations as the Congressional Research Service, RAND Corporation, National Bureau of Asian Research, IHS Jane’s, China SignPost, and commercial enterprises and consultancies; as well as such USN entities as the Office of Naval Research, the staff of the Chief of Naval Operations, and the Pacific Command and Pacific Fleet. There were also distinguished attendees from the navies and governments of such important U.S. allies as Japan, South Korea, Canada, the United Kingdom, and France.

The conference thus focused some of the world’s leading experts and analysts on one of the most important global dynamics today. China continues to lack transparency in important respects, but much is knowable through CMSI’s well-established investigative approach. Particularly given the complex, interdisciplinary nature of the subject at hand, in arranging the development of conference papers and presentations, special effort was made to pair technical and industry specialists with Chinese-language-capable subject matter experts. Presenters have commanded ships at sea, led shipbuilding programs ashore, toured Chinese vessels and production facilities, invested in Chinese shipyards and advised others in their investment, and produced and presented important assessments to top-level decision-makers during critical events. Synthesizing their collective insights, together with those of the other conference participants, can help to fill a key gap in our understanding of China, its shipbuilding, its navy, and what it all means. As with all CMSI conferences, all views expressed by the contributors are theirs alone.

In my personal view, the conference yielded the following key findings overall—none of which may be attributed in any way to a specific participant or organization:

-The growth of China’s shipbuilding industry is more rapid than any other in modern history, with a 13-fold increase in Chinese commercial shipbuilding output from 2002-12. Although advancements in recent years are substantial in aggregate, they vary significantly by subfield.

-Through a process of “imitative innovation,” China has been able to “leap frog” some naval development, engineering, and production steps and achieve tremendous cost and time savings by leveraging work done by the United States and other countries.

-Fleet design and quality improvement efforts are driven by two factors. PLAN shipbuilding choices are informed by a combination of technological and strategic analysis produced by the PLAN’s two main research organizations. Ship construction is increasingly subject to a detailed set of national and navy military standards.

-China’s shipbuilding industry is poised to make the PLAN the second largest navy in the world by 2020, and—if current trends continue—a combat fleet that in overall order of battle (i.e., hardware-specific terms) is quantitatively and even perhaps qualitatively on a par with that of the USN by 2030.

-By 2030, the PLAN would still be in the early stages of increasing operational proficiency and its ability to engage in high-intensity operations in distant waters, but could nevertheless—together with other PLA forces—develop tremendous ability to actively oppose USN operations in a zone of contestation for sea control in the “Near Seas” (Yellow, East China, and South China Seas), while extending layers of influence and reach far beyond.

-By 2020, China is on course to build ships able to deploy greater quantities of anti-ship cruise missiles (ASCMs) with greater ranges than those systems used by the USN.

In my personal judgment, the conference also yielded the following specific insights:

Chinese Shipyards: The Chinese Communist Party (CCP) has assigned the shipbuilding industry a key role in China’s development as a great power, including support for China’s geostrategic endeavors. The state-owned shipyards also offer a major job and skills development program serving larger CCP economic objectives. A likely area of future growth will be development of the supporting and maintenance infrastructure for in-service vessels following the spate of recent construction—a difficult task even for the USN.

State-owned versus Private Shipyards: In aggregate, and increasingly together, China’s two largest shipbuilding conglomerates—China Shipbuilding Industry Corporation (CSIC) and China State Shipbuilding Corporation (CSSC)—possess great resources and capacity, but retain tremendous inefficiencies. Their institutional culture is still influenced by legacy values, norms, and incentives. Their monopoly structure remains one of the central impediments to improving efficiency and innovation. On the other hand, private yards are oriented toward short-term, profit-minded thinking and are not funded to engage in long-term R&D-intensive projects. While CSIC and CSSC have increasingly undertaken naval and para-naval business to absorb excess yard capacity after commercial “Peak Ship” construction occurred around 2012, private yards have largely been left to fend for themselves. Throughout the industry, bureaucratic barriers to efficiency and effectiveness remain a problem, especially for propulsion and shipboard electronic systems and their integration into ships.

Chinese Shipbuilding Standards: Specific Chinese shipbuilding plans and military standards are derived from the Weapons and Armament Development Strategy (WADS), a highly classified document drafted by the General Armament Department (GAD) and approved by the Central Military Commission (CMC). It includes sections assessing the international security environment, military equipment requirements, analysis of the strengths and weakness of Chinese armaments in relation to naval objectives, and assessments of S&T development. One of China’s most important national military shipbuilding standards is the 国家军用标准 Guojia Junyong Biaozhun (GJB) 4000-2000 publication series, General Specifications for Naval Ships, a massive compendium focused on new and planned construction. It represents a major advance from China’s copycat assimilation of thousands of U.S. standards during the 1980s and ’90s.