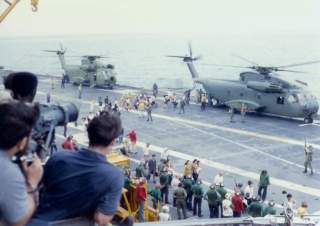 Pundits, journalists, and scholars are once again comparing the conflict in Iraq to the Vietnam War. After the U.S. invaded Iraq in 2003, observers began drawing the analogy in earnest, and now that the Islamic State in Iraq and Syria is threatening the government in Baghdad, analysts are continuing to draw parallels between the two wars. They point out the lack of motivation of Iraqi and South Vietnamese troops, the unpopularity of Nguyen Van Thieu and Nouri al-Maliki, and the inability of U.S. military power to achieve decisive victory. Commentators chide the U.S. government and military strategists for not learning from the mistakes their predecessors made in Vietnam. Some envision a chaotic evacuation of the U.S Embassy in Baghdad a la Saigon 1975.

It is easy to understand why this line of comparison is convenient. U.S. troops and political advisors went to Iraq and Vietnam ostensibly to help establish a democratic nation. In both cases, Americans severely misunderstood the local conditions that made it difficult for democracy to take root. The inability to make sense of the domestic contexts caused the U.S. to sink into a military quagmire in which winning battles did not lead to overall victory in war. In both countries, ideological movements -- radical Islam in Iraq, communism in Vietnam -- trumped nationalism so that brothers fought brothers in civil wars. For those on the Left, the Vietnam War remains the ultimate symbol of the hubris of American imperialism. Some on the Right see Vietnam as an example of what happens when the U.S. abandons an ally. Across the political spectrum, the Vietnam War has become shorthand for U.S. foreign policy and military failure, and so when a shaky government that Americans have tried to pass off as a democracy begins to crumble, some analysts are quick to christen it "another Vietnam."

Despite the commonalities, it is time to stop comparing Iraq to Vietnam. It is unproductive to view the conflict in Iraq through the lens of the Vietnam War, in which U.S. intervention began more than fifty years ago and ended forty years ago in a very different international context. To justify the war in Vietnam, American policy makers exaggerated communism's threat to American security and considered Vietnam a place where the U.S. could showcase its nation-building capabilities as post-World War II decolonization produced new countries in Africa and Asia. The U.S. has executed military engagements since Vietnam, particularly the first Persian Gulf War and the war in Afghanistan, that offer more accurate points of comparison. The U.S.-led invasion of Iraq in 1991 was America's first post-Cold War conflict and one that illustrated the "new world order" in which the U.S. was the globe's sole super-power. Gulf War I was also the root of the current conflict in Iraq. From the crippling sanctions the U.N. Security Council imposed on Iraq in 1990 to George W. Bush's effort to "finish the job" of his father and get Saddam Hussein, the first Gulf War offers a more direct map for understanding the progression of events that led to ISIS's advance in Iraq than the Vietnam War does. Looking beyond Iraq, Afghanistan reveals how difficult it is to impose and maintain democracy in the face of violent religious extremists. Afghanistan is America's other 21st century war, and it, like Iraq, began as part of the "global war on terror." By returning to the old Vietnam War comparison every time the U.S. stages a military intervention, we miss opportunities to evaluate more recent conflicts which are directly related to Iraq, rather than basing analysis on the general parallels between the Iraq and Vietnam wars.

That the U.S. has not learned from Vietnam is obvious now. What can more recent wars teach us about the perils and potential consequences of attempting to implement democracy through military force? If we turn our attention to subsequent American military engagements, perhaps we can find some useful lessons about the 21st century global order and American affairs in the Middle East.

Heather Marie Stur, Ph.D., is a 2013-14 Fulbright Scholar in Vietnam, where she is a visiting professor on the Faculty of International Relations at the University of Social Sciences and Humanities in Ho Chi Minh City. She is an associate professor of history at the University of Southern Mississippi and a fellow in the Dale Center for the Study of War and Society. She is the author of Beyond Combat: Women and Gender in the Vietnam War Era (Cambridge 2011).