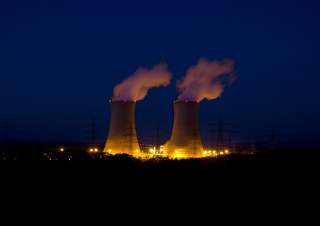 The U.S. is losing global influence to Russia and China by allowing its nuclear power industry to stagnate, according to a new study by the Global Nexus Initiative.

The study argued nuclear power is a significant element of a country’s geopolitical influence. Technological exchanges and long timeframes involved in building and operating a nuclear plant create diplomatic relationships between nations, and those ties are threatened as the U.S. nuclear industry continues to decline.

“China is poised to become the Amazon.com of nuclear commerce,” Kenneth Luongo, president of the Partnership for Global Security, said during a press conference Tuesday. “The U.S. is losing ground to Russia and China on nuclear power.”

Researchers from the Partnership for Global Security and the industry-funded Nuclear Energy Institute (NEI) conducted the study.

China is set to triple the amount of nuclear power it generates by 2026, overtaking the U.S. as the country with the most nuclear power. China plans to spend $570 billion building more than 60 nuclear power plants over the next decade.

Russia’s nuclear power program is also on the rise. Some of the world’s first floating nuclear power plants are being developed in Russia, and the country is pioneering fast reactors, according to experts.

Russia plans to complete one new large reactor per year, on average, until at least 2028. Nuclear technology and the services required to run it are a “major Russian policy and economic objective,” according to the World Nuclear Association.

Vital safety, security, and nonproliferation standards will erode if the U.S. allows Russia and China to become the world’s premier nuclear powers.

“To increase its market share and thereby preserve its ability to shape the global use of nuclear technology, the United States must have both a strong domestic nuclear power program and an aggressive nuclear trade and export program,” Maria Korsnick, president of the Nuclear Energy Institute (NEI), said in the press conference.

Approving new nuclear reactors takes as little as two years in China and Russia, but getting regulatory approval in the U.S. to build a new reactor can take up to 25 years. It took 43 years to build America’s newest nuclear reactor, which was racked by scandals, red tape and environmental concerns.

Worldwide installed nuclear capacity is expected to grow 60 percent by 2040, according to the International Energy Agency. American capacity will likely only grow by 16 percent over the same time period.

“Preserving the existing [U.S.] fleet is also fundamental to achieve these goals,” Korsnick said. “Without the existing fleet and the associated infrastructure it will be increasingly difficult for technological innovation to occur or to maintain a robust supply chain for our nuclear navy.”