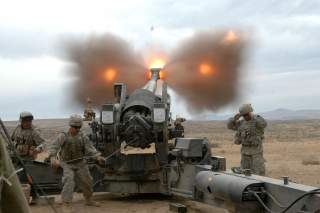 Electronic warfare and radio frequency (RF) weapons might be the best way to counter the emerging threat of swarming drone attacks. While in previous years, drones were a tool of state actors, increasingly non-state actors are using these weapons against conventional forces as was recently demonstrated when Russian forces came under attack by more than a dozen ‘home-made’ unmanned aerial vehicles (UAV) built by an unknown insurgent group.

“Trying to create a ‘steel wall’ might be of some help, and by that, I mean rapid-firing guns. Targeting these guns against multiple drones that are dispersed and may be attacking from multiple quadrants would be a significant problem, of course.  For a high-power RF defense, you could probably swivel an emitter quite rapidly to different quadrants to place multiple threats within its beam width.”

Especially when dealing with multiple incoming drones, kinetic weapons such as guns might not be the optimal solution.

“I don’t think there are many great kinetic solutions to defeating large numbers of small drones in a very short period of time,” Gunzinger said. “I do think there are some promising technologies that could help, including high-power RF weapons.”

The Russians—who have direct experience on the receiving end of such an attack—are mostly focusing on a combination of electronic warfare combined with kinetic weapons such as the Pantsir-S1, which offers both missile and cannon capability. The debate for the Russian military is which direction they should lean towards more heavily.

“The Russian combination of early warning radar, robust EW and anti-aircraft fires seemed to work rather well in this case,” Sam Bendett, a researcher specializing in Russian military robotics at the Center for Naval Analyses told The National Interest. “The current debate is what methods can work better—kinetic, like Pantsir system, or non-contact like electronic warfare that jams UAVs' signals and communications.”

But there is no one-size-fits-all solution to the swarming drone attack problem. “We are talking about a very wide aperture for a drone-borne attack—from small quadrocopters, to plane-like UAVs that attacked Hmeimim, to potential coordinated swarms made up of small and large drones,” Bendett said. “There are separate solutions to a particular type of drone attack.”

The Russians seem believe that electronic warfare is a particularly useful tool against drones. “The Russians are certainly leaning in the direction of sophisticated EW that can protect sites, bases and other objects,” Bendett said. “The type of defense would vary depending on the attacking planes. Depending on what works best against that particular type of target.”

If there is an overarching solution, electronic warfare is as close as it gets. “There can be no single solution although signals jamming may be the best overarching strategy since so far, all drones use some kind of radio and comms frequencies,” Bendett said.

Ultimately, the solution will a combination of defensive weapons that will be required to defeat this growing threat.