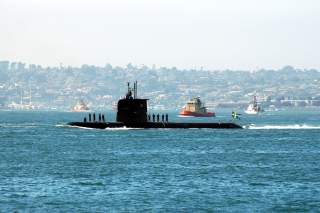 Back in 2009, the Swedish town of Karlskrona had a brilliant idea to boost tourist traffic: install Web cameras overlooking the picturesque Swedish coast.

But there was just one problem with this marketing gimmick: as a local writer pointed out this summer, the Karlskrona cameras were live streaming the nearby naval base—Sweden's largest and home to the country's fleet of five advanced non-nuclear submarines.

Now, a submarine's best friends are stealth and secrecy, which is why submariners jealously guard these qualities. And there is nothing less secret than a live stream of subs sailing on the surface as they leave and enter port.

While navies often don't mind a bit of publicity for their expensive ships, this was the kind the Swedish Navy could do without. “The pictures are in poor resolution, but I still think it's unnecessary for the municipality to have it,” a security official at the naval base told a Swedish newspaper (the Google translation is here). “We have already pointed out to the municipality that it is inappropriate.”

The official conceded that “anyone can take a seat and see our traffic when we go in and out with boats. But it is still inappropriate that it is located online.”

The town's initial response to the Swedish Navy? You can’t stop us. “These cameras are under the Personal Protection Act and it is strict,” said Karlskrona's tourist manager. “There are no possibilities to zoom in on these types of cameras and they are quite low-resolution.”

She also promised that “should it be a problem that affects the security of the country, we would obviously remove the camera.”

However, the author of one naval news site disagrees. “In fact the low resolution is only a minor annoyance for OSINT (open source intelligence) analysts. Although, on its own, the webcam view does not allow identification of which vessel is moving (except in cases where the vessel is large and distinct, for example an aircraft carrier or Typhoon-class submarine), it provides a useful part of a larger picture. When combined with other OSINT sources the sum of the whole becomes greater than the parts and a lot of information can be gleamed from the blurry images.”

Alas, there's bad news for the poor Russian spy who will no longer be able to monitor Swedish ship movements from a nice, warm desk in Moscow. Swedish press reported earlier this month that Karlskrona had agreed to remove the camera.

Nonetheless, the incident still illustrates how difficult it is to keep military movements secret in an era of plane spotters, trainspotters, YouTube and cell phone cameras. Here's a Website with Google Earth images of warships around the world.