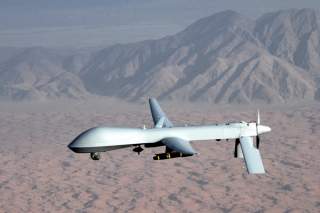 After five years of steady operations, the United States no longer has any MQ-1 Predators based in Djibouti. The Air Force quietly pulled the drones as the service find itself in the middle of a resource crunch and as it faces new threats around the world.

In October, the flying branch closed down the 60th Expeditionary Reconnaissance Squadron. Since at least 2010, America’s unmanned attackers have struck terrorists in Yemen and Somalia from bases in the small East African nation on more than 100 occasions.

The Air Force initially flew the missions from Camp Lemonnier, America’s only formal base on the continent. Two years ago, the Pentagon announced it was moving all its drones in the country to the remote and secretive Chabelley Airfield outside Djibouti’s capital city.

Between November 2014 and October, “remotely piloted aircraft flown out of Chabelley accumulated over 24,000 hours of armed intelligence, surveillance and reconnaissance and were responsible for the neutralization of 69 enemy fighters, including five high valued individuals,” Air Force Maj. Kori, head of operations analysis at the 380th Expeditionary Operations Group in the United Arab Emirates, told military reporters.

Since Islamic State regularly threatens to kill American service members and their families, the Pentagon often removes identifying information such as last names from reports about personnel and units in the Middle East.

In this case, the news of the Predators’ departure might relate to the rise of Islamic State—and broad shifts in the region—beyond just the missing surnames.

In 2013, the Air Force began finalizing plans to retire the iconic drones. After the Sept. 11, 2001 terrorist attacks, the Predators had quickly become a prominent face of Washington’s far-reaching and often controversial fight against terrorism.

Initially, the flying branch wanted to completely replace the older unmanned aircraft with the larger and more powerful MQ-9 Reaper sometime next year. At the same time, the Pentagon pushed for more Combat Air Patrols, or CAPs.

With between three and five aircraft, a CAP can essentially keep a specific area under surveillance indefinitely. When one drone runs low on fuel, another arrives to take up the watch. But the demand has put more pressure on overworked and often demoralized pilots and sensor operators.

In 2012, the Air Force explored almost 20 different possible arrangements – including substituting tiny, manned MC-12W Liberty spy planes for Reapers in some cases—to reduce the strain on the drone force, according to a briefing War Is Boring obtained through the Freedom of Information Act.

“Future . . . requirements for inventory and operations sizing should not be based on the standard wartime/peacetime construct, but must reflect a new model of continued, persistent growth,” Pentagon chief Robert Gates wrote in a June 2011 memo to Air Force secretary Michael Donley and Gen. Norton Schwartz, the Air Force chief of staff.

But despite the flying branch’s efforts, there just never seemed to be enough drones or pilots to fly them. In August, the Air Force announced it had pushed back plans to retire the Predator until 2018. In November, the flying branch said it was moving forward with plans to hire private contractors to help pick up the slack.

Under the circumstances, yanking the Predators in Djibouti and freeing up the manpower was a no-brainer. The 60th Expeditionary Reconnaissance Squadron was the only unit still flying the type in Africa anyways.

So with an unspecified number of the heavily-armed Reapers still at Chabelley for strikes in Somalia, the Air Force was no doubt happy to move drone crews on to other missions. For one, drones have been a key part of the war in Iraq and Syria, despite being overshadowed by high-flying B-1 bombers, fast-flying F-15 and F-16 fighter bombers and deadly A-10 and AC-130 attackers.

On Aug. 18, an American drone killed Islamic State’s number two, Haji Mutazz, near the city of Mosul in Iraq. Air Force Reapers working with their British counterparts blasted Mohammed “Jihadhi John” Emwazi, a fighter and propagandist responsible for the murder of foreign journalists and aid workers, in the terrorist group’s capital of Raqqa in Syria.

On Dec. 1, Secretary of Defense Ashton Carter told members of the House Armed Services Committee that the Pentagon was preparing to send a team of commandos to Iraq to help hunt down high-ranking members of Islamic State. Described as a “specialized expeditionary targeting force,” the 200 or so special operators will need a constant stream of intelligence – from drones and other sources – to make their raids worthwhile.

And as the Pentagon focuses on battling the Islamic State, missions in Yemen and Somalia appear to have fallen down the priority list in general. Reported drone strikes in both countries are at their lowest point in years.

“There were no U.S. drone strikes reported in Yemen in November, the second calendar month this year without a reported attack,” researchers with the Bureau of Investigative Journalism noted in a monthly update on Dec. 1. “The first strike in Somalia since July killed at least five people on November 21, according to three Somali government officials and local residents.”

On top of the demands in the Middle East, the Pentagon needs drones—beyond just the lowly Predator—and people to fly them all over the world. In August, the Texas Air National Guard sent a pair of MQ-1s to Latvia as part of Washington’s efforts to calm European allies in the face of an increasingly bellicose Russia.

The Air Force’s unmanned aircraft make regular appearances in the Pacific and Latin America, too. All in all, while the Predator’s time in Djibouti may be up, the Pentagon hasn’t lost any of its appetite for drones . . . in East Africa, or anywhere else.

This article originally appeared in War is Boring.